Glassman optimistic about future of university in State of University address 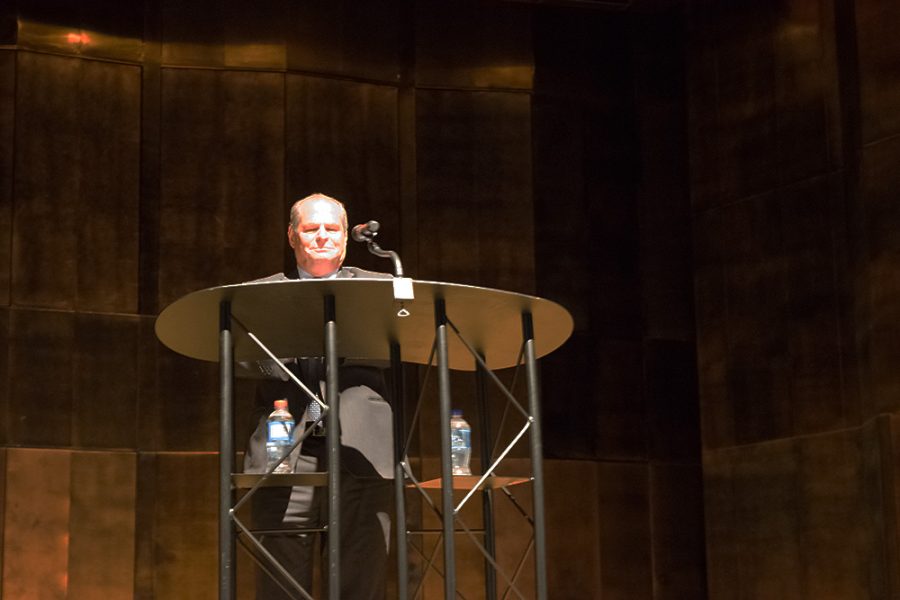 Eastern President David Glassman gave his State of the University Address at 3:30pm Wednesday at the Dvorak Concert Hall in the Doudna Fine Arts Center.

Eastern President David Glassman gave his Fall 2018 State of the University Address, which focused on the challenges of past years and the improvements looking forward, Wednesday in the Dvorak Concert Hall of the Doudna Fine Arts Center.

This is Glassman’s fourth year as Eastern’s president, and, as he said, it is his first year as president that Eastern was informed of its appropriate budget at the beginning of the fiscal year.

He also said that Eastern faculty, staff and students need to continue being patient when it comes to budget matters.

“Yes, the state impasse is over, but the deleterious effects of the past years cannot be reversed overnight,” Glassman said.

Glassman said that this year’s budget is still “admittedly, less than what we feel would be appropriate,” but that this was a good starting point.

These projects, not all of which he said are guaranteed to actually receive funding, include work already started in the elevators of McAfee Gymnasium and the Student Services Building.

Glassman said that, despite the budget this year, Eastern will have to continue balancing expenses with revenues.

“We will need to maintain the fiscally conservative policies we’ve adopted over the past few years,” he said. “In essence, the spending levels will closely parallel last year’s across all divisions.”

The president also brought up different legislative bills that came out of the Higher Education Workgroup created within the Illinois Senate.

One of the bills, called House Bill 5020, deals with the Monetary Award Program.

It also states that if a student begins their higher education studies in Illinois, their MAP funding will continue throughout their undergraduate programs, as long as they stay in state, Glassman said.

Unlike MAP grants, AIM HIGH scholarships are restricted to students who attend one of the 12 Illinois public universities.

This program provided $25 million for this fiscal year to be spread out among all 12 universities.

It also requires universities to match the amount of that $25 million they use, which means Eastern is eligible for about $1 million.

Glassman said that, out of that, comes three new scholarship programs.

The first one, titled EIU Promise, says that Eastern will completely offset any remaining balance of a student’s tuition and fee costs for resident families if they can prove a family income of $61,000 or less.

The second program, EIU Cost Match, states that Eastern will match the out-of-pocket cost of attendance to any “regionally accredited university in Indiana, Iowa, Kentucky, Michigan, Ohio and Wisconsin.”

To qualify, Glassman said Illinois students can submit their financial aid award letters from any university that qualifies.

The third program is the EIU Merit Scholarship Bonus, which provides qualified Illinois students with a renewable scholarship bonus of at least $2,500 every year.

Glassman said this involved combining already-existing Merit Scholarship benefits with the state-funded AIM HIGH dollars, which allows qualified Eastern Students who are eligible to earn up to $18,000 in scholarship funding over four years or eight semesters.

Accelerated graduate programs, which have been discussed by Ryan Hendrickson, the dean of the graduate school, and his staff, were discussed in the president’s speech as well.

These programs allow current undergraduate students to receive their baccalaureate and master’s degree in a shortened amount of time.

The 10th day enrollment numbers were also mentioned, with the numbers showing a 24.5 percent increase in first-time, full-time incoming freshmen when compared to last year.

Overall, Glassman said he felt positive going into this year and about Eastern’s future as a whole.

“Eastern Illinois University is definitely on the move,” Glassman said. “You can hear, there’s a buzz across the state, and although we are certainly not yet where we want to be, you can feel the tangible progress we have already made.”