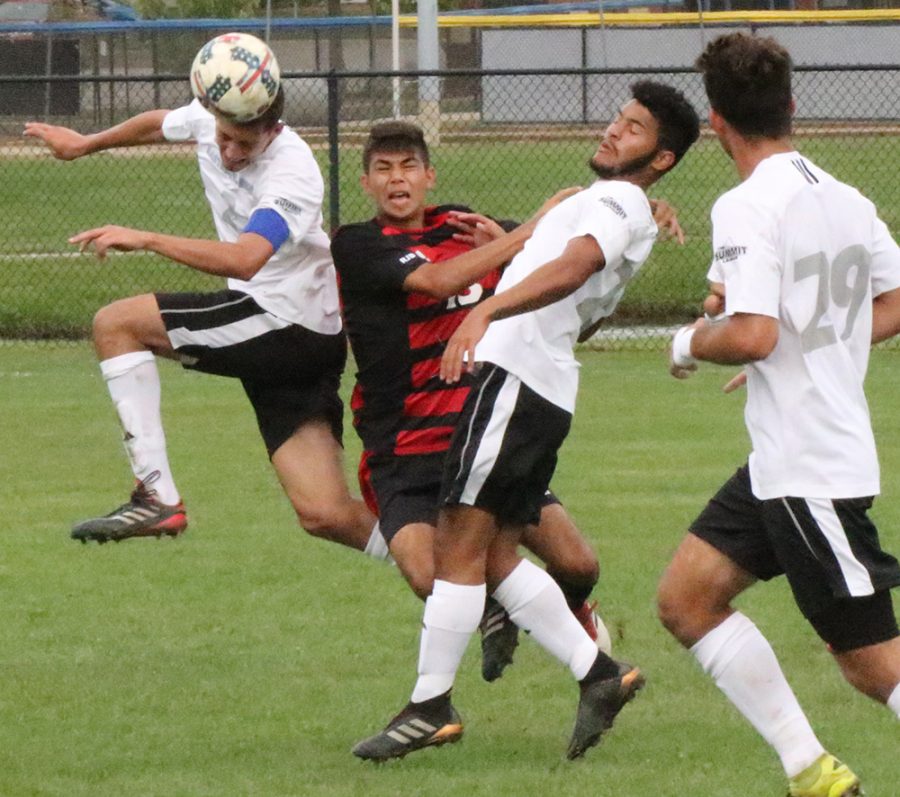 Two Eastern players collide with a Northern Illinois defender as all three of them leap in the air to head a ball. Eastern lost the game 2-0 which was played at Lakeside Field on Sept. 21 at Lakeside Field.

Eastern’s men’s soccer team had its second straight match against a team with leaders in national offensive categories, but Tuesday’s result was different from Eastern’s first match of such caliber.

Tuesday’s result is a polar opposite to Eastern’s outcome Saturday against Summit league foe Denver, who has the nation’s leading scorer in Andre Shinyashiki. Eastern held him to only four shots in the match, only one of them on goal, which was a penalty kick that Eastern goalkeeper Jonathan Burke stopped.

Eastern head coach Kiki Lara and some players mentioned after Saturday’s 0-0 draw with Denver that the match was going to give them confidence and momentum going forward, but Northern Kentucky put a hard stop to that momentum.

And while Eastern held Northern Kentucky’s go-to man in check, freshman Alex Willis who is second in the country in goals scored, the Norse still found other ways to get its victory.

Northern Kentucky had three goals on 17 total shots, eight of which were on goal. The Norse also beat out Eastern in the number of corner kicks taken (6-4).

Northern Kentucky got its scoring started early, when Calvin Murphy put a shot into the back of the net in the 15th minute.

Murphy was set up by teammates Felix Komolong and Stian Joergensen, when both headed the ball off a kick into the box the ball fell to Murphy, who finished in front of the net for his fifth goal of the season.

The Norse controlled the ball most of the game and continued to get multiple chances to score throughout the match. The second chance to score that Northern Kentucky converted for a goal was in the 53rd minute, when Murphy added an insurance goal and his sixth of the season.

Murphy’s two goals move him into second place for the most goals on the Norse, only behind Willis, who has 11.

The Norse’s final goal came from Rizwaan Dharsey, who added another goal in the 81st minute. Dharsey got a pass from teammate Rikard Lindqvist in the box and beat a couple of Eastern defenders and squeezed the ball between the goal post and Burke.

One of the assists on the second goal for Northern Kentucky came from Alex Greive, who leads the nation in assists. His assist Tuesday is his 11th on the season.

In an opposite showing offensively, the Panthers had a difficult time, especially in the first half, getting chances to score. Finding space and creating chances was something Lara wanted to see his team improve on Tuesday.

Eastern finished Tuesday’s match with eight shots, only one of which was on goal.

The Panthers’ next match is Saturday at noon when Eastern hosts Western Illinois for its second conference match of the season.