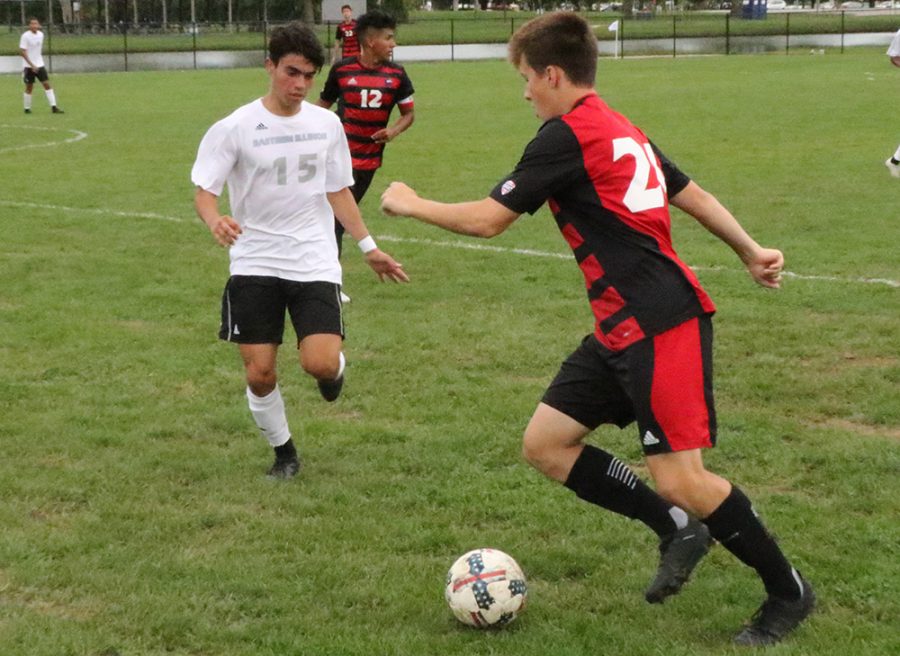 Eastern redshirt-freshman Zabdiel Justiniano defends a Northern Illinois player on Sept. 21 at Lakeside Field. The Panthers lost that game 2-0, they are 2-5-3 overall this season.

With a big result now behind the men’s soccer team, head coach Kiki Lara’s message to his players is to stay level-headed.

Taking the No. 4 team in the nation (Denver) to a draw through two overtimes is no easy task, especially when the Panthers held the nation’s leading scorer, Andre Shinyashiki who has 19 goals through 10 matches (including Saturday’s draw), to only four shots.

On top of that, Eastern goalkeeper Jonathan Burke stopped Shinyashiki’s only shot on goal, which was a penalty kick.

The team was understandably hyped and excited after the draw, earning a conference point in the process. But Lara wants to make sure the team does not get too hyped.

Lara added that he does want the team to carry the momentum from the draw, and that it was a great game for the team to take with it and build upon as the season grows longer.

In Saturday’s draw, Eastern and Denver both had eight total shots, but Eastern had five on goal to Denver’s one.

Even so, Lara said he wants the team to improve on creating chances and its channel play, finding space to create and score.

“For us, we really need to recognize where the space is,” Lara said. “When you have more space, you’ve got more … time and more ability to play and impact the game offensively. We’ve got to do a better job of recognizing when to go under (the defensive back line) and when to go over and try to get, ultimately, closer to their goal.”

Leading the Panthers in shots Saturday was freshman David Camacho Jr., who had been a defender for most of the season, but played forward against Denver.

Lara said Camacho is a competitor and could see more playing time in an attacking position, stating that he showed good signs and has good forward, as well as defender, qualities.

Also, returning to the pitch Saturday was Christian Sosnowski, who had been sidelined for the past couple matches. Lara said he has had a groin issue since the team’s match against Wright State.

He played in the later part of Saturday’s match, and Lara said they will use him against Northern Kentucky Tuesday to get him back for the long run, adding that the team has missed him on the field.

Other than finding space better, Lara wants to see his players rotate well on the field and “get the job done,” hitting the system the team has in place.

Northern Kentucky will be another good challenge for Eastern, as the Norse are 7-3 on the season.

The Panthers will get no rest from trying to defend a prolific scorer, going from containing Shinyashiki to facing Northern Kentucky’s Alex Willis, who has 11 goals this season, which was the second-most in the nation entering Saturday.

The matchup is scheduled for a 6 p.m. start time.