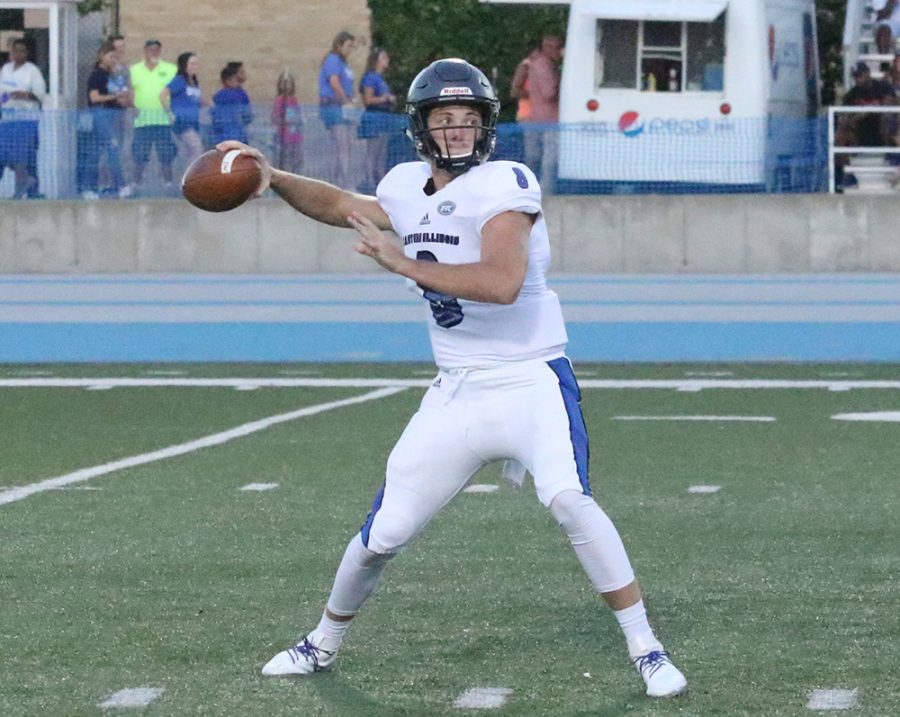 Eastern quarterback Harry Woodbery drops back to pass against Indiana State on Sept. 15. The Panthers lost the game 55-41.

It is tough to say if all the pieces finally fell together for the Eastern football team or if just a few of the right pieces fell in at just the right time as the Panthers picked up their first win of the season in a 52-38 win over Tennessee Tech on Saturday.

The offense looked good again as Eastern dropped a season-high 52-points on a Tennessee Tech defense that came into the game allowing 51 on average, but some of the demons that were to blame for Eastern’s 0-4 start to the season were still lurking in the shadows of Eastern’s win.

The win can come as a big sigh of relief for a team that desperately needed one after folding on a 21-point lead last week against Tennessee State.

Here are the three biggest takeaways from Eastern’s first win of the season.

These two guys just will not quit. Since last Spring, quarterbacks Harry Woodbery and Johnathan Brantley have been locked in a quarterback battle for the ages. Both quarterbacks have been listed as the starting quarterbacks in four of the Panthers five games this season, and every time one of them plays well, or bad for that matter, the other has matched.

Saturday’s game against Tennessee Tech was once again a demonstration of the Panthers’ depth at quarterback. Brantley was listed as the lone starter at quarterback after he threw for 443 yards and four touchdowns in week three against Indiana State. Against Tennessee State Brantley exited the game and Woodbery responded by throwing for over 100-yards in the fourth quarter.

Saturday against Tennessee Tech, Brantley did not play because of an issue with his hip, leaving Woodbery alone in the driver’s seat at quarterback, and he delivered.

Woodbery completed 32 of 49 pass attempts for 339 yards and five touchdowns, rarely making a bad throw a delivering a message to the rest of the OVC that Eastern definitely has two quarterbacks to be worried about.

So, while Eastern trudges forward into week six for a date with Murray State, still with no clear starting quarterback, Panther fans can rest easy knowing there are two very good options for Eastern to go to in any game.

The defense was not good, again.

The defense should take solace in the fact that the offense put up 52 points and 599 yards, creating just enough of a veil to hide that Eastern’s defense gave up 38 points and 526 yards to a team that came into the game averaging just 13 points per game.

Quarterback Bailey Fisher entered the game ranked last in the OVC in quarterback efficiency for Tennessee Tech, but the freshman picked apart Eastern’s secondary, which was without all-conference cornerback Mark Williams, for 383 yards and four touchdowns.

Eastern’s run defense was better than it had been in weeks past and the pass rush was able to put up three sacks, two from defensive end Levi Watson, and keep Fisher uncomfortable for most of the game.

But the secondary struggled again with the same things it has been all season, getting beat in coverage and leaving players open in space all over the field.

Whew. They needed this one.

On paper this was just a game between the OVC’s two bottom schools in the standings, but for the morale of the Eastern football team, the game meant so much more than that.

In week one Eastern lost to Arkansas in a game where it bizarrely coughed up five fumbles. Week two the Panthers were embarrassed by Illinois State on the road, week three the Panthers surrendered 51-point to Indiana State and in week four the real-gut punch came when Eastern gave up a 21-point lead to fall to Tennessee State in the conference opener.

Eastern all around was frustrated with its 0-4 start and especially after the Tennessee State loss, it felt like the Panthers could not catch a break on the field.

Although the Tennesse Tech game was not perfect, it cannot be overstated how important it is for this team to finally have a mark in the win column.