Eastern to give new defensive scheme another go 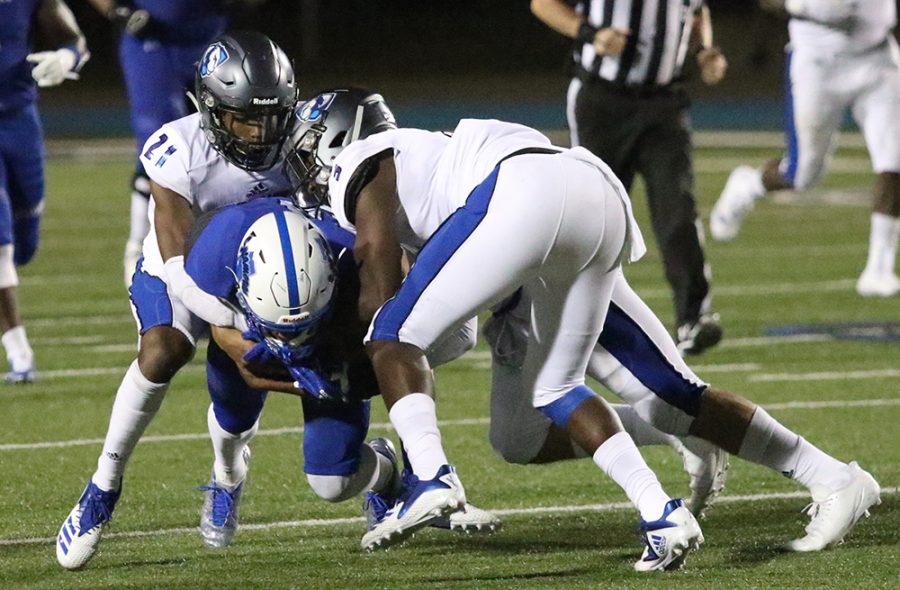 A trio of Eastern players, Iziah Gulley, Mark Williams and Joe Caputo, work to bring down an Indiana State ball carrier in the Panthers’ 55-41 week three loss. In week five against Tennessee Tech, Eastern will once again deploy 3-3-5 defense for the second week in a row.

The Eastern football team right now is taking a risk that many teams would never consider taking, but one the coaching staff felt was necessary if the team was going to turn its season around. The risk? Completely overhauling the defense midseason, switching from a 4-3 to a 3-3-5. Rare? Yes. Guaranteed to work? No. But it’s a change Eastern is diving into headfirst without looking back.

The change was sparked by a 51-44 loss the team suffered to Indiana State, the third straight loss in which the Panthers had given up 40-plus points. Nothing on the defensive side of the ball was working and desperate times call for desperate measures, so the defensive got a facelift almost immediately.

In week one of the 3-3-5, results were mixed; Eastern blew a 21-point lead in a 41-40 loss to Tennesse State and still gave up 544-yards on defense. But, in the first half of the game, the potential of the new scheme flashed itself a couple of times and those flashes are what the team hopes to see materialize Saturday against Tennessee Tech.

“This week we will be able to add some new wrinkles and some things and so as the year progresses we definitely have a direction we’re going to go,” head coach Kim Dameron said. “I am hoping it’s much improved this week from last week. The thing about it is we played pretty well for about a half and then we just gave up too many running yards.”

The scheme featured a three-down lineman rotation of Levi Watson and Josh Price at the defensive end positions, with Taylon Shepard playing the tackle position up the middle. Those three rotated in and out with another group that featured D’Mitri George and Ryan Coleman at the ends, with Terrell Greer up the middle.

Both groups left some things to be desired on the field, but Dameron said anytime a team switches to a three-down scheme, the opposition gets a tendency to “lean on you”, which can open up big plays in the run game.

What did not help against Tennessee State, Dameron said, was the back end of the field had to be wary of Tennessee State’s receivers, which meant they could not focus all their attention on the run.

Dytarious Johnson, Joe Caputo and Nolan Dean got the starts at linebacker and are listed there again for the Tennessee Tech game. The secondary remained mostly the same with the switch, DySaun Smith and Mark Williams held their typical spots at cornerback. Raymond Crittenden and Corneliuss Page stayed at the safety and star spots and Iziah Gulley played the rover.

Gulley has been replaced on the depth chart by Edwyn Brown at the rover spot ahead of the Tennessee Tech game.

The Golden Eagles are a team that likes to run the ball, but they have not shown the same type of passing threat Tennessee State had which made them so dangerous against the 3-3-5. And although the Golden Eagles are 0-4 and rank last in almost every statistical category in the conference on both offense and defense, Dameron is expecting them to be better on Saturday than a lot of people give them credit for.

“I expect them to be well-coached and physical, be able to run the ball,” Dameron said. “They’re more of a pro-style, they run the ball a little more.”

Tennessee Tech starts freshman Bailey Fisher at quarterback. Fisher has two touchdowns and is last in the OVC in quarterback efficiency, but Dameron still views him as a threat.

“Dual-threat guy, he can run, but he can throw it better than what people give him credit for, I think,” Dameron said. “I’ve been really impressed by him and just his presence on the field as a true-freshman.”

-Harry Woodbery is once again listed as the starting quarterback for Eastern along with Johnathan Brantley. Woodbery threw for over 100 yards and a touchdown in the fouth quarter last week.

-Tennessee Tech is last in the OVC allowing 51 points per game, just three points more than Eastern, who sits right behind them.

-Both teams will be playing for their first wins of the season.

-The game begins at 6 p.m. on Saturday in Cookeville, Tenn.