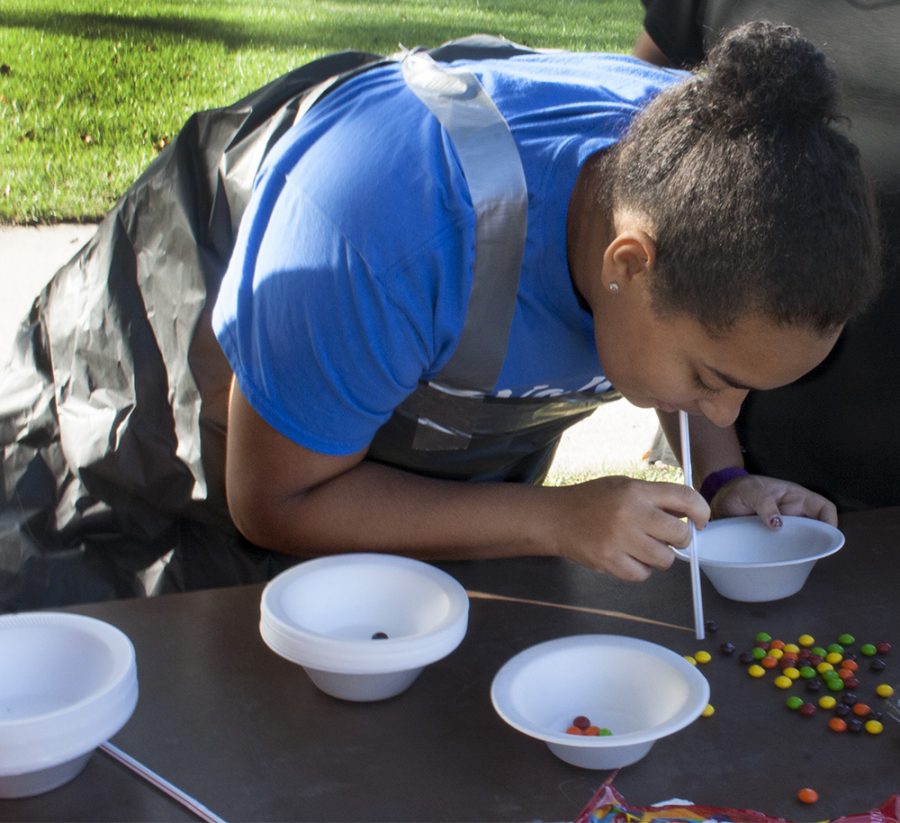 Shakria Williams, a freshman majoring in special education who was a part of Lawson Hall, uses a straw to get Skittles into a bowl at the ROCFest obstacle course Tuesday.

While people waited for the Movie Premier Obstacle Course Tuesday afternoon to be set up for the Residents On Campus Fest, the students competing played an ice breaker together.

Jovan William, the vice president of community engagement for residents hall association, said the Movie Premier Obstacle Course was set to take place in the North Quad, but it changed it to the Library Quad last minute.

William said he decided on the Hollywood theme for ROCFest because he thought of things most people would like, which is why RHA decided on movies.

William shared one thing he thinks is Hollywood is going through the red carpet, which is how he planned the movie premier obstacle course.

“I actually started watching reality TV and, seeing the stress of how … stressful it is getting ready for a premier event,” William said. “(I) was like oh, that would be cool to incorporate that too because there are obstacles that happen within a day.”

The residents each had two team members representing their hall. There were two stations set up; one was the dressing up station, and the other was the accessories station.

The first team member would get help from the second team player to dress up for the red carpet and then move to the next station.

Once one was finished with the stations, the player would take an egg in a spoon without dropping it while walking up and down the outside library stairs.

Afterward, the first player would get to choose their celebrity, and then it would be the next one of their teams’ turn to do the obstacles.

Veronica Palacios, a freshman musical major who competed for Lawson Hall, said she had recently participated in the trivia event ROCFest hosted and said she has met more people from her residence hall through the various ROCFest activities.

“The events are fun,” Palacios said. “I enjoyed them more than I thought I would.”

Bailey Eslinger, a Pemberton desk assistant, said she has seen the ROCFest bring other halls closer together because of the competitions.

“I’d say it’s bringing our residence closer together just because we are spending all this time doing the different activities,” Eslinger said.

Alex Mann, a freshman history teacher education major, said there have not been any struggles from her McKinney Hall team, because of the communication and all her hall council are very close.

“I think we have been doing good,” Mann said. “We’ve been having a good time, like the window’s, we are very passionate about that (work).”

McKinney Hall, where Mann lives, decorated their window with characters of Scooby-Doo and stuff from the show for their Hollywood window paint.

Palacios said a struggle she has had in events is that, in her experience, some of them can get confusing.

She said, with this event, she did not know what order to go but said she would still join the next campus activities because of the fun.