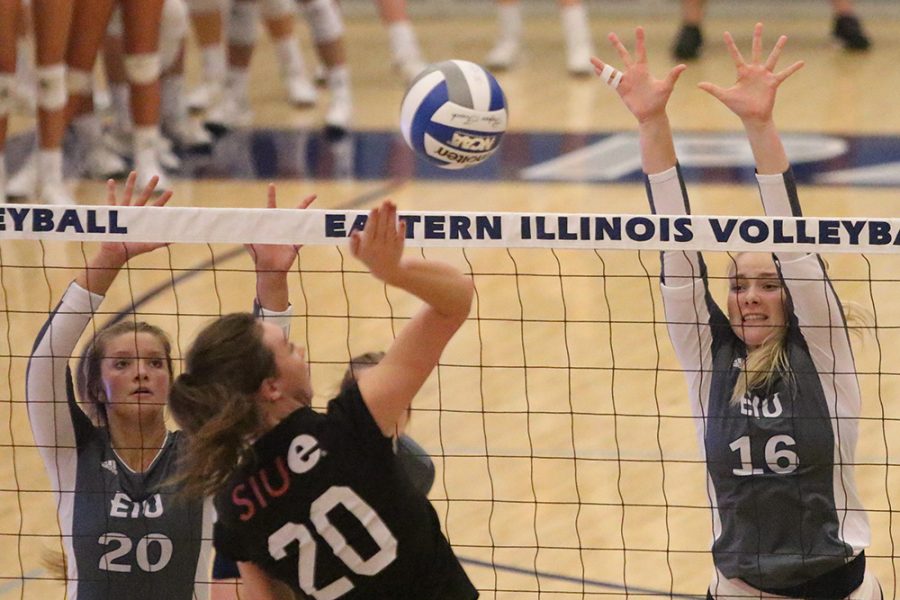 Eastern junior Maggie Runge jumps in the air to block a hit by a Southern Illinois Edwardsville player Sept. 19 at Lantz Arena. Eastern won the match three sets to zero.

Two days after the Eastern volleyball team’s 3-0 loss to Tennessee State on Saturday, head coach Julie Allen has charted a template for Tuesday night’s match at Chicago State. If the Panthers execute, according to Allen, their best impression of the Tigers, the chances against Chicago State will be all the more promising.

At certain intervals of each set against Tennessee State, Eastern’s offense became listless, unlike the Tigers who, from the very beginning, regulated the tempo of this conference contest.

“I am hoping we can go after Chicago State like Tennessee State did to us,” Allen said.

The Tigers bolted out to a 9-0 lead in the first set and swarmed the Panthers’ defense with eight consecutive points in the set to follow.

Earlier that set, the Panthers, intent on wearing down the Tigers’ stability, received routine contributions from junior Katie Sommer, sophomore Laurel Bailey and freshman Hannah Sieg, as all three collaborated on a 7-0 run to put the Panthers down two, 16-14.

But Tennessee State juniors Johanna Kruize and Julia Peirson, who combined for more points than the entire Eastern volleyball team, scuttled the Panthers’ comeback effort, as evidenced by the Tigers’ 4-0 run that finished off the set.

The team’s offensive troubles in the Saturday afternoon match, Allen surmised, were antithetical to all that the Panthers have been working toward, namely the ability to derail defenses before an opposing offense has any opportunity to gain any leverage over them.

“We are talking about how to be more aggressive on our swings,” Allen said.

“We’re going with the more offensive approach with it and then, you know, allow Anne (Hughes) to do what she does, and she brings great defense for us to allow us to be more aggressive.”

Chicago State’s digs per set average is second highest in the Western Athletic Conference, so the Panthers have been burnishing their offensive skills in practice this week in preparation for the Cougars.

This ranking can be traced back to Megan Klavitter, whose digs per set average is ninth in the nation among Division I athletes.

At 5-3, Klavitter’s size does not provide an accurate measure of her stature on the defensive end.

Klavitter rounded up her second WAC defensive player of the week award on Monday, the second time she has been recognized with the distinction this season.

Coming out of Linden High School in Michigan, Klavitter’s defensive proclivities were what attracted her to Chicago State’s recruitment team, as she broke the school record for digs in a season, while attaining all-region honors for the Class-A division.

When attempting to pinpoint the most salient characteristic that has come to define Klavitter’s playing style, Allen thought a word, or rather a trait, seemed most appropriate.

“Go-getter,” Allen said. “I love that she is going to go after it, motivate her teammates by constant communication and effort. That is what everyone looks for in a volleyball player.”

To that end, Klavitter, with the reinforcement of her teammates, has upheld that same fervor, win or lose.

In Chicago State’s road match at Seattle University this past Saturday, Klavitter outdueled all opponents on defense with a match high 29 digs, but a lack of scoring drives, in concert with the Cougars’ bounty of errors, would be the overarching theme behind a 3-0 loss to the Redhawks.

It was her defensive play, however, that virtually altered the course of the third set when, after the score alternated between teams, Seattle won 27-25.

“They definitely allow her to run the court, they funnel balls to her, which any coach would,” Allen said.