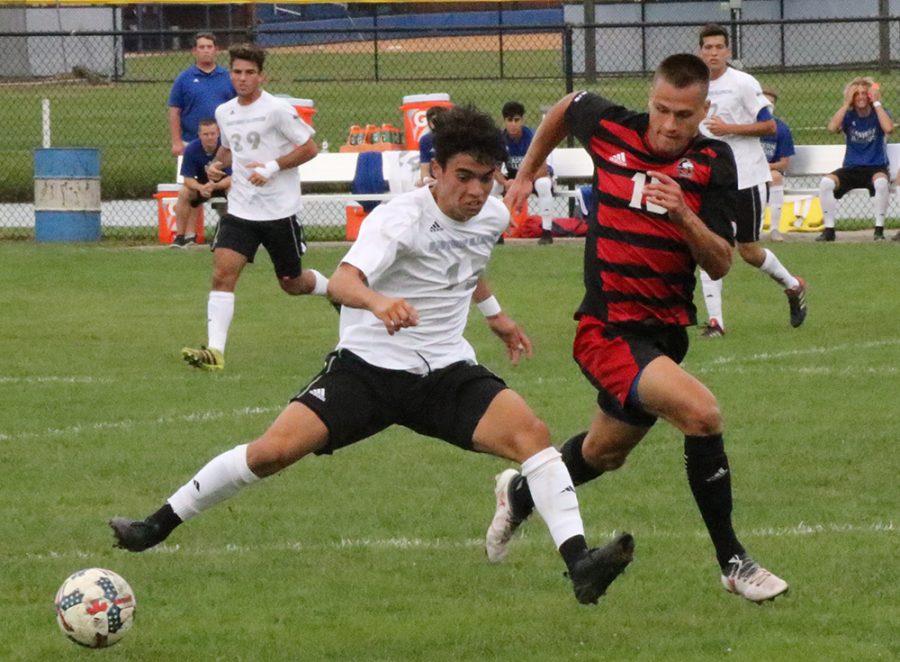 Eastern redshirt freshman Zabdiel Justiniano attempts to keep the ball in front of him in a match with Northern Illinois Sept. 21 at Lakeside Field. The Panthers lost the game 2-0 and saw their record fall to 2-4-2.

The Eastern men’s soccer team started its season strong offensively, averaging 10 shots per game in the first six matches of the season and scoring five goals, already half of last season’s total.

Head coach Kiki Lara and the players had mentioned a few times how the offense was an area of improvement from last year, that the team was hungry to score more this year and that creating chances to score and capitalizing on those chances was important for the team’s success.

But coming into this week, the Panthers have hit a small bump in the road.

“We played two very good opponents that make it tough to get into our attack mode,” Lara said. “(We have been) playing some quality programs, and we have to step into those games with more urgency in our possessions and creating numbers-up situations.”

After Eastern’s last two matches, the Panthers are now averaging 8.5 shots per game, which is still an OK number, but is down from the team’s mark for the season.

After Friday’s loss, Lara said his team did not execute its rotational play very well, which hurt the scoring chances.

Rotational play, Lara said, is switching the point of the team’s attack from one side of the field to the other.

“Especially in our attacking half, (our rotational play) needs to improve so we have a bit more space to attack,” Lara said.

Aside from improving rotational play, Lara said two other things could help his team get back on track offensively.

“We just have to improve some quality moments of possession so that we can get more from our attack,” Lara said. “We need to recognize where the space is quicker and when we get there with more numbers.”

This week’s matches for Eastern are important for the Panthers to prepare for the rest of the season, as Tuesday will be a chance for the team to get back into form before starting conference play Saturday against none other than Denver.

But looking at Tuesday, Eastern will be on the road and will face off against Belmont.

The Bruins are 1-5-1 overall, with their only win coming in a 1-0, double-overtime victory against Presbyterian.

Belmont is averaging only 7.9 shots per game, while allowing its opponents to get off 18.1 shots per game. The Bruins have given up 16 goals on the season, compared to Eastern’s eight.

Belmont has five goals of its own this season, the same amount as Eastern’s total. Unlike Eastern, though, the Bruins have five players who have a goal each, with Ares Marlonsson leading the team in points (four) with one goal and two assists. Niccolo Dagnoni leads Belmont in shots with 11 so far, while also having one assist to his name.

Eastern’s match Tuesday is scheduled to start at 6:30 p.m.