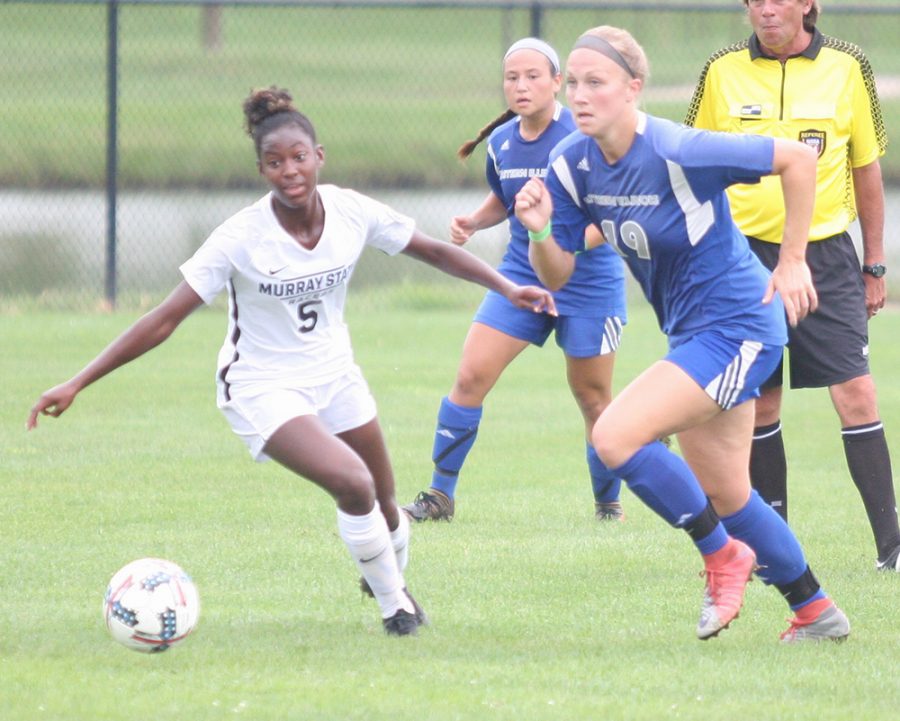 Eastern senior Kate Olson pushes the ball on offense against Murray State on Sept. 21. Olson scored her first goal of the season in the match, which the Panthers lost 2-1.

With their second conference victory of the season on Sunday, the Eastern women’s soccer team has matched their conference win total from the last two seasons combined.

They went 1-1 in conference play this weekend, losing 2-1 to Murray State on Friday and then beating Austin Peay 1-0 on Sunday.

The Panthers’ overall record is 3-5-3. With six OVC matches remaining before the tournament, the Panthers are 2-1-1 in the OVC and are in second place in the standings.

Through four conference matches this season, Eastern has surrendered just two goals while scoring three. They are the only OVC team to register three shutouts in conference play.

Although the Murray State match on Friday ended up in the loss column, head coach Jake Plant said he liked what he saw from the Panthers against the reigning OVC champions.

“To go on our home field, take the lead and really worry them for a while, it’s kudos to the work the girls have put in,” Plant said.

Junior goalkeeper Sara Teteak made seven saves against Murray State, including two saves against Miyah Watford, the OVC’s leading scorer. It was Watford’s first game of the season without a goal.

The Panthers’ lone goal came courtesy of senior Kate Olson, her first of the year.

On Sunday against Austin Peay, senior Kayla Stolfa registered her first goal of the season in the 71st minute. The Panther defense shut down the Governors the rest of the way for the shutout win.

The defense only surrendered two shots on goal, both saved by Teteak.

“It was probably our best performance all year, and it was finished off with a great goal,” Plant said. “The girls are very much in a great spot to get into the tournament.”

Looking forward through the remainder of conference play, Plant hopes the defensive play can continue to be consistent.

“It’s not just luck at this point,” he said. “The big thing is that the girls are buying in the idea of how we defend and how we attack. They believe in what we’re doing.”

Teteak is the individual Panther who is making the most appearances on OVC leaderboards this season. She is third in the OVC in saves with 41. Her shutout against Austin Peay moved her into sole possession of the OVC lead in shutouts with five.

Junior Lexi Ketterhagen is also among the OVC leaders in assists after picking up her third on Sunday.

Plant said he has been stressing consistency since the preseason and said he is happy with the team’s recent performances.

“It’s been excellent from everybody, from start to finish. From the keeper, to the backlines, to the forwards, to the subs that come in,” Plant said. “Everyone should be proud of what they’ve done so far. But their job isn’t done. They’ve got work to do next week.”

The Panthers will be home again next week facing Belmont at 3 p.m. on Friday and Tennessee Martin at 1 p.m. on Sunday.

Tennessee-Martin has only played two conference matches this season but have won both. They have the best overall record in the OVC at 7-2.