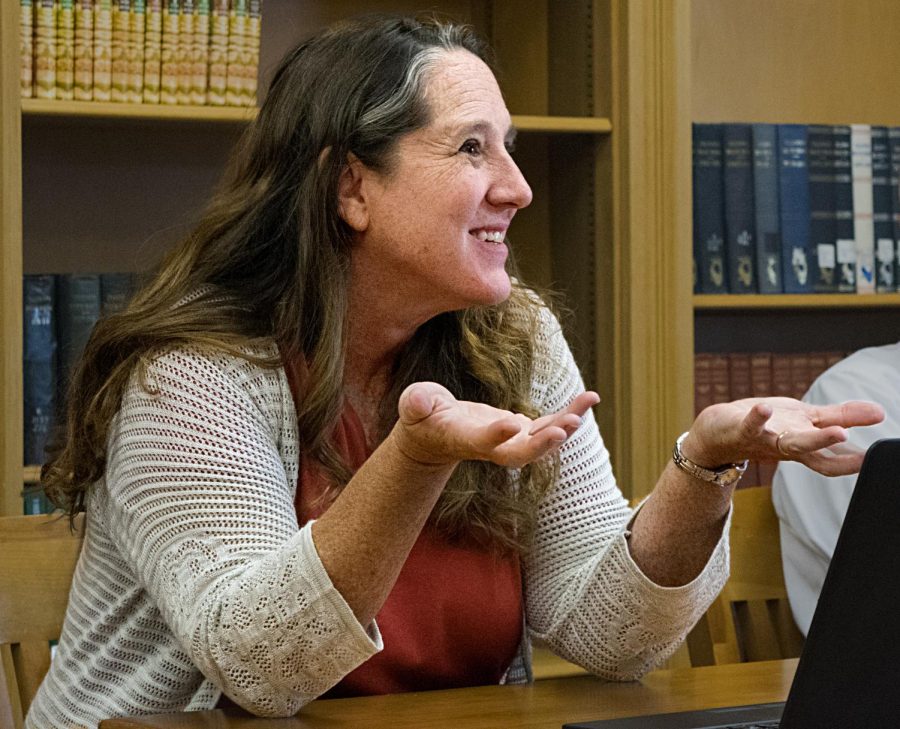 Rebecca Throneburg is a member of the Council on Academic Affairs and is a communications disorders and sciences professor. CAA discussed new changes in the shared governance discussion and added two action items to their agenda for next week.

While the end of shared governance discussions may have seemed over to some following the conclusion of the Faculty Senate meeting on Tuesday, members of the Council on Academic Affairs were in for a surprise at their meeting Sept. 20.

The senate ended their meeting with Todd Bruns, senate chair and scholarly communication librarian and institutional repository director, heading off to write a more formal proposal of his Faculty Congress idea.

The congress idea would, Bruns said at that meeting, make the organizations on campus less hierarchical and more equal.

“(Faculty Congress) is the organizational umbrella of CAA, which works on curriculum, of COTE, which works on teacher education, CGS, which does what it does, Faculty Senate does everything else,” he said. “It’s basically just codifying and saying CAA, COTE, CGS and Faculty Senate combined represent the faculty.”

“I might suggest, that if one word was added to the constitution that says these are committees of the faculty senate, then suddenly we have a relationship, which we then want to cultivate with these other committees,” he said.

“We’re not claiming any more power than we already have; it gives us reason to collaborate more and feel like we are connected in some way.”

Rebecca Throneburg, a CAA member and a communication disorders and sciences professor who was in attendance of that Sept. 18 meeting, said she disagrees with Stowell completely.

“(Adding senate) says that basically CAA is a subgroup of Faculty Senate, and I‘m OK with that, if Faculty Senate is a representative body of the other people,” Throneburg said. “Otherwise, we really don’t like the model of CAA, COTE is a committee of the senate with a liaison being a part of that. (CAA) is opposed to that.”

Many council members said they left the senate meeting feeling optimistic about the idea of a Faculty Congress, which would make all organizations equal and allow them to act as sole experts of their given area.

Before the CAA meeting Thursday, Marita Gronnvoll, the CAA chair and the communication studies associate chair, said Bruns visited her and told her that Stowell planned to go through with proposing his plan to the senate for a vote.

Stowell’s plan would include a change to the constitution as well as the addition of having any new programs CAA approved that requires Illinois Board of Higher Education approval to appear on the senate agenda as an executive action.

This means that the proposal would not be officially approved until it went through the senate, after going through CAA.

Gronnvoll said that both proposals, Bruns’s Faculty Congress and Stowell’s changes, will go through the senate at their Oct. 2 meeting.

If both proposals are passed by the senate, then the conflicting resolutions will be put up to a vote for all faculty on campus.

Gronnvoll said she felt confused about the direction that some senators had chosen to take.

“This is disappointing, it’s extremely disappointing. The feeling in the room (at the senate meeting) that I had was, overall, that Faculty Senate was behind what (Bruns) was proposing,” she said. “So to hear that (Stowell) feels he wants to go ahead and do this resolution, which is going to be pushed through, that’s what he wants to do, it’s disappointing and I don’t really understand where it’s coming from. It does seem to not be a majority opinion.”

Barry Kronenfeld, CAA member and geography professor, said he was less wary of Stowell’s proposal than other members of the council.

“I am not as resistant as you guys are to some degree of hierarchy, I do agree that Faculty Senate should not be making curricular decisions, but I do think as a body we shouldn’t resist any kind of oversight,” Kronenfeld said. “I mean, we should welcome some feedback and guidance.”

Stacey Ruholl, CAA member and kinesiology, sport and recreation professor, said she could see where Kronenfeld was coming from, but she still disagreed.

“Recognizing that Faculty Senate is not representative, they don’t make sure they have a good distribution of senators from all the various areas, that’s a concern and I think they would have to change that,” she said. “I agree with what we’ve been talking about for a long time, in that they don’t have any background of any of what we’ve done for all these years of looking at courses, looking at programs, and then to just trump everything that we do. That’s what they’re trying to say.”

Many council members said they did not understand how Stowell’s proposal would address any of the Higher Learning Commission concerns that this whole discussion has been centered around.

Bruns and Gronnvoll encouraged members of CAA, COTE and CGS to attend the senate’s Oct. 2 meeting at 2 p.m. in room 4440 of the Mary J Booth Library with the hopes that with more voices, Stowell’s proposal will not pass through the senate.