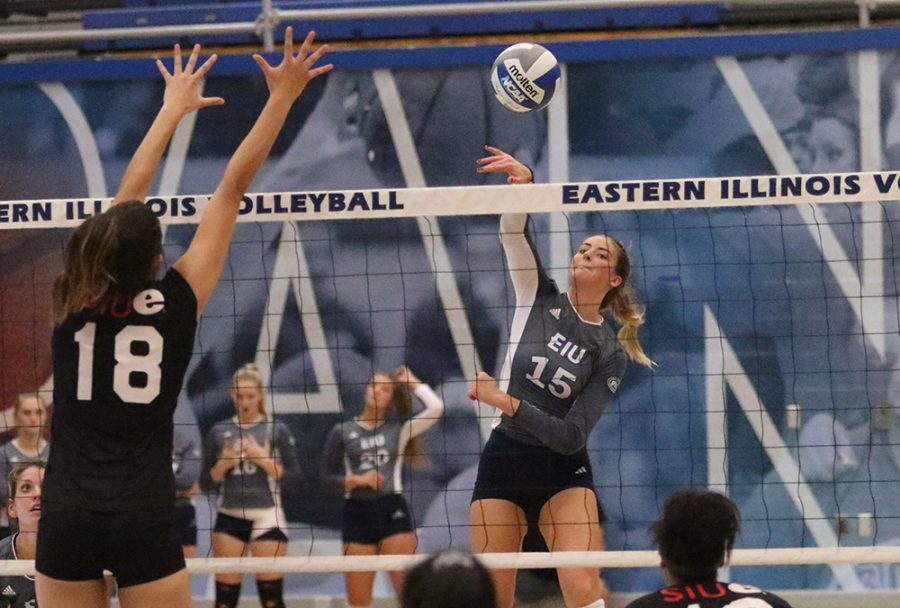 Any edge the Panthers gained over Southern Illinois Edwardsville in the Ohio Valley Conference tournament, when the Panthers pummeled the Cougars 3-1 in the first round, has been, in a sense, carried over from a year ago.

So yes, the Panthers reaffirmed what separated the two teams nearly a year ago, with a 3-0 win over the Cougars on Wednesday night.

Without senior Taylor Smith, who endured a sprained ankle at the Drake tournament nearly two weeks ago, the Panthers have done their best to adjust and, in the meantime, carry on in her absence.

While the Panthers can in no way fill such a void, both from an offensive and defensive perspective, the players have persisted as best they can, considering the circumstances.

Redshirt freshman Kylie Michael’s two kills in set two heartened an offense that had seen its command over SIUE decompose, as the Cougars came out ahead 14-7.

“She did a really good job of believing in herself, head coach Julie Allen said. “We told her, you know, ‘hit it as hard as you want, we will get your back.”

Off six consecutive Cougar points, Michael’s aforementioned production would spearhead a 6-0 run, shaving the deficit to 14-13, an omen for Southern Illinois Edwardsville Dyllan Otte’s attack error that surrendered set two to the Panthers in match point.

The Cougars offense began to fizzle when, with Eastern leading 13-10 in the third set, Michael compiled three kills to double the Panthers advantage. She would finish the match with 12 kills, five blocks and three digs. Laurel Bailey aggregated 14 digs, and so too did Anne Hughes.

“After not getting the kill right away, we just came back together, ‘Okay get this pass, get this kill and then we will be fine, just get out of it,”’ Michael said.