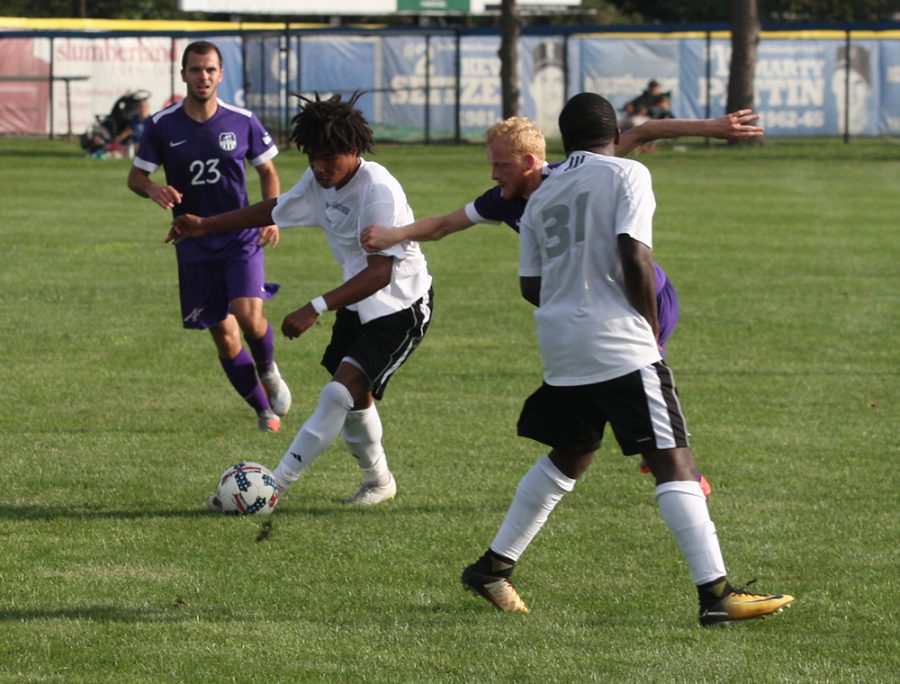 Eastern freshman Cole Stephens fights off an Evansville defender at Lakeside Field on Aug.31. The game ended in a 1-1 draw, Eastern is 2-3-2 this season.

Eastern needs a win this weekend to keep pace as Denver and Oral Roberts continue to dominate the Summit League soccer race.

The Panthers (2-3-2) face Northern Illinois at 4 p.m. Friday at Lakeside Field, as they try and rebound after two straight scoreless matches.

Eastern faced a tough undefeated Wright State squad last week, and the next contest may not provide much relief, as Northern comes off a 3-0 stint at home over the past two weeks.

Meanwhile, Denver (6-0-1) continues to roll on the shoulders of senior Andre Shinyashiki.

Denver posted six goals in two matches last week, and Shinyashiki contributed to all of them, scoring five goals and adding one assist.

Shinyashiki and the rest of the Pioneers face a quick turnaround this weekend, taking on Omaha to open conference play for both teams and taking on Tulsa Monday night.

Oral Roberts (5-2-1) sits right behind Denver in the Summit League standings after a 5-1 rout of Gonzaga Friday and a commanding 3-1 win over Grand Canyon on Monday.

Motakef leads the conference with 41 saves and is fourth in goals against average at 0.81.

With an explosive offense at the helm, Fort Wayne (4-3) is nipping at the heels of the top of the conference despite going 1-1 over the last week.

Fort Wayne freshman goalkeeper Tor Larsen ranks second in the Summit League with 34 saves in over 613 minutes in the net.

Western Illinois (2-4-2) continues to tread in the bottom half of the conference after a win, a draw, and a loss in the past week.

The Fighting Leathernecks have the worst goal differential in the Summit League, allowing 11 goals and scoring just six.

Western Illinois’ next match is not until Sept. 29 when it opens conference play against Omaha.

Omaha (1-4) lays in the cellar of the Summit League after dropping its match against UCLA last Wednesday by a 2-1 tally.