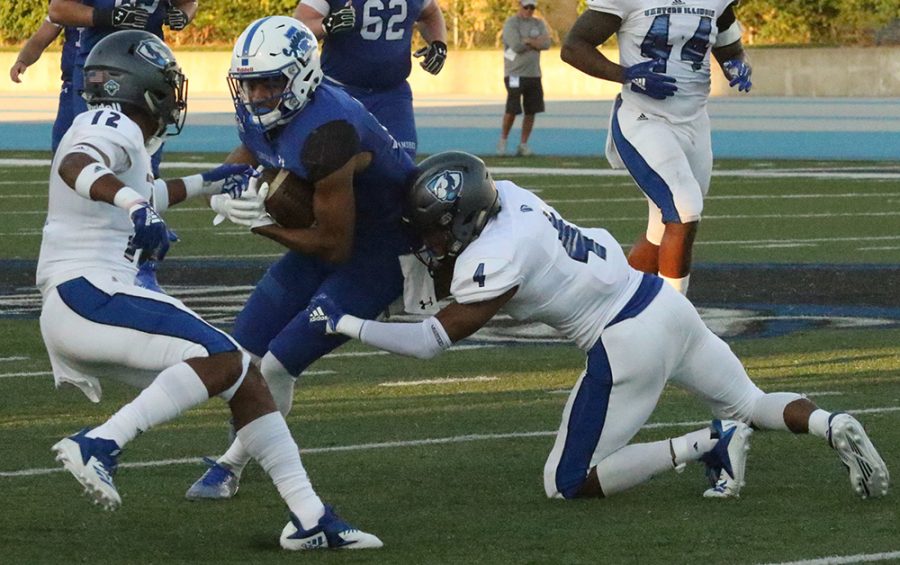 Eastern safety Raymond Crittenden (4) and cornerback DySaun Smith (12) combine to make a tackle in a 51-44 loss to Indiana State on Saturday at O’Brien Field. Crittenden had a game-high 11 tackles, but the team as a whole struggled to make tackles all game.

Southeast Missouri running back Marquis Terry reminded the entire Ohio Valley Conference why he was a preseason all-conference selection on Saturday when he set the OVC record with 311 rushing yards in his team’s 48-44 win over Southern Illinois.

Terry’s big game helped Southeast Missouri improve to 2-1, putting them at the top of the conference with Austin Peay.

Terry put up four touchdowns in the win over Southern Illinois bringing his season total to an OVC best six. His 590 rushing yards this season is 279 more than the next leading rusher, Daryl McClesky of Eastern Kentucky.

Austin Peay improved to 2-1 after laying a 78-40 beatdown on Morehead State on the road.

The Governors tore through Morehead State’s defense, putting up 758 total yards on offense, 518 of them on the ground. Running back Kentel Williams had 181 yards rushing with three touchdowns and quarterback Jeremiah Oatsvall broke off for 117. Williams and Oatsvall put up 298 combined yards between them on just 13 total carries, averaging 23 yards per carry.

Austin Peay and Southeast Missouri were the only two teams in the conference to pick up wins, as the bottom half of the conference struggled as four teams remain winless.

Tennessee Tech, Eastern, Murray State and Tennessee-Martin all lost again to fall to 0-3.

Tennessee Tech was blown out once again, this time losing to Utah State 73-12. The Golden Eagles have been outscored 156-32 this season in three games.

On offense Tennessee Tech has been anemic and the Utah State game was no different. The Golden Eagles were just 1 of 15 on third down conversions against Utah State and had just 227 yards of total offense. For reference, Tennessee Tech has just 902 yards on offense this season, Southeast Missouri’s Terry has 794 on his own.

Tennessee-Martin dropped a game at home to Chattanooga 34-24 on Saturday to watch its record drop to 0-3.

Skykawks’ quarterback Dresser Winn had another big passing game as he threw for 300 yards, two touchdowns, but also two interceptions in the loss. Winn leads the OVC in yards with 824, touchdowns with seven, but also interceptions with four.

The two interceptions by Winn were costly as Tennesse-Martin outplayed Chattanooga in many ways. The Skyhawks outgained Chattanooga 457 yards to 361 and also ran 21 more plays.

Murray State lost to SEC program Kentucky on Saturday in a game that is pretty difficult to judge the Racers on.

Murray State put up 302 total yards on offense, which all things considered, is a pretty respectable total against an SEC school.

The most intriguing match will be between Eastern Kentucky and Southeast Missouri in Kentucky.