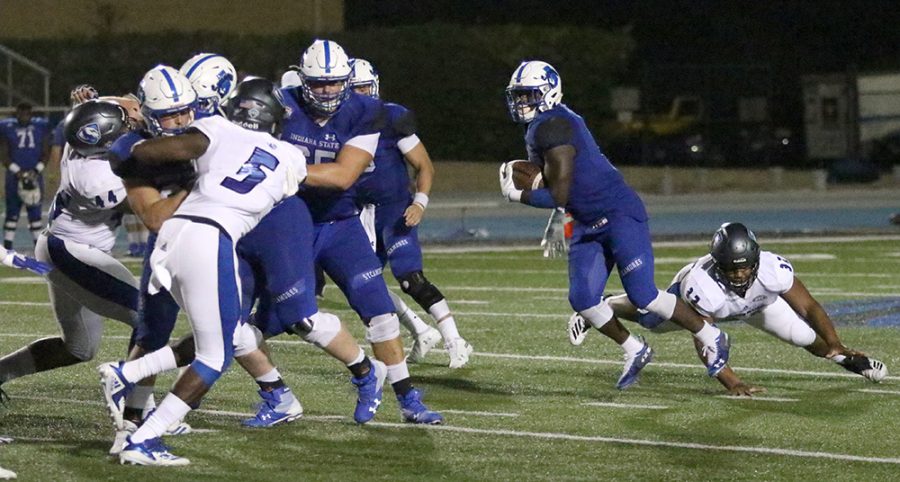 Everything about the Eastern football team’s defense might be getting changed after the team fell to 0-3 after giving up 55 points in a loss to Indiana State on Saturday. And yes, everything about the defense could be totally different by week’s end; that is how serious the coaching staff is taking what they saw from their defense.

The Panthers gave up 55 points for the second time this season and in three games have already given up 158 total points in just three games. Against Indiana State, Eastern gave up 535 total yards, 326 on the ground, in a game that head coach Kim Dameron said he was not sure if his defense did anything right.

That comment from Dameron basically sums up the narrative about the defense; it’s been bad.

“We were pitiful tackling and had guys getting out of gaps at times, but I just thought our tackling was really bad,” Dameron said. “We tried to tackle these backs and sometimes we were trying to tackle them up high and we’d bounce off, and other times we were tackling them in the legs.”

The tackling in itself may just be a microcosm of a much bigger underlying issue that the team dealt with in a 48-10 loss to Illinois State in week two, and that is getting physically beaten up front.

Eastern’s defensive line got pushed around by Indiana State, and the linebackers and secondary could not seem to bring people down to the ground, all this led to Sycamore running back Ja’Quan Keys totaling 232 yards rushing with four touchdowns.

Dameron felt the coaching staff was calling plays that were leading right into the run plays, but either Eastern was missing tackles, or the running backs were able to bounce outside before getting tackled.

“It felt like we were just out there and they were doing what they wanted to do,” Dameron said. “We made calls into it, we would bring pressure or whatever, they just did a really good job of picking it up.”

The postgame press conference was too early for Dameron to determine exactly what was going to be changed with the defense, but it was made very clear that something is going to be different, for better or for worse.

“We may have to change completely everything we do defensively,” Dameron said. “We may have to go to a … well I don’t know. We played odd this week quite a bit which is our 3-4 package type stuff, but we had a safety on the weakside, he wasn’t physical enough. We’re just going to have to look at defending the run better, I know that. We have to do a better job.”

Eastern is typically a program that prides itself on defense, and Dameron said the most frustrating part about the situation is that schematically, this is how Eastern has been defending the run for years, and he knows that it works.

“For whatever reason these first three games have just been horrendous,” Dameron said.

Dameron said the schemes themselves probably cannot get any simpler than what they are, for the reason of preventing mental lapses on defense to go with the lack of execution physically.

“I feel bad for the kids, I really do feel bad for our defensive kids,” Dameron said. “They don’t want to play like that. But there is something that is missing right now and we have to figure out quickly what it is.”

One thing Dameron knows for sure is that his defense has struggled to defend tight end-oriented sets that teams have been putting on the field. Those sets are something the Eastern team did not see all spring or fall, and so far they have not been able to match the physicality that comes with those schemes.

The defense was so bad, in fact, that it almost completely masked how good the offense played. Quarterback Johnathan Brantley threw for 443 yards and four touchdowns, and receiver Alexander Hollins had a career day with 10 receptions, three touchdowns and 167 yards.

-Brantley’s 443 yards were the 8th most ever in a game by an Eastern quarterback.

-This was the first time since 2004 that Indiana State has beaten Eastern.

-Eastern’s Matt Reyna returned a kick 97-yards for a touchdown. It was the first time since 2015 any Eastern player has done this.

-The quarterback battle might be reaching a conclusion; Harry Woodbery only threw five passes in the game, and Brantley threw 49.

-Eastern linebacker Dytarious Johnson went down multiple times in the game, and it appeared he was holding his arm.

-Safety Raymond Crittenden had 11 tackles in the game.