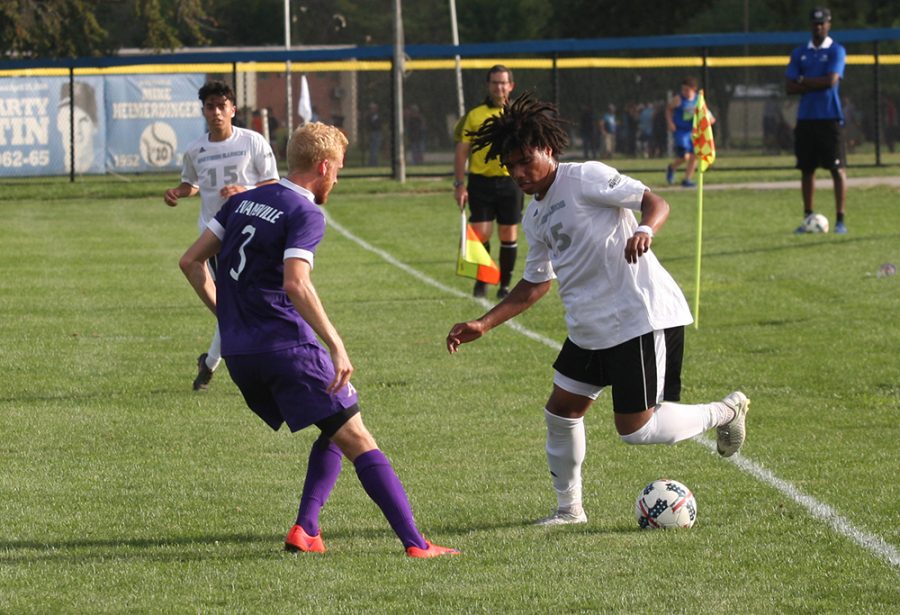 Freshman Cole Stephens tries to do a move with the ball to get around an Evansville defender during Eastern’s 1-1 draw with Evansville at Lakeside Field on Aug. 31.

The only thing IUPUI (1-2-2) had more of than Eastern (2-2-2) was saves, which attests to the fact that Eastern had more shots and shots on goal. Other than that, Eastern and IUPUI tied with their respective amount of corner kicks (2).

But despite leading the Jaguars with multiple statistics throughout the match, the one thing that did elude the Panthers was the back of the net.

It was just one of those matches where everything goes right, but the final step to coming home with a victory was somehow elusive.

The biggest disparity between Eastern and IUPUI Wednesday was the shot totals for both teams.

The Panthers fired off 14 total shots, compared to IUPUI’s four. On top of that, Eastern finished the match with four shots on goal, two times IUPUI’s mark of two.

Shady Omar led Eastern with four shots, none of which ended up on goal. Kris Luke finished Wednesday with the second-most amount of shots (3) and half of the team’s shots on goal in the match (2).

Three Panthers, Christian Sosnowski, Jake Andrews and Cole Harkrader, each had 2 shots Wednesday, and Cameron Behm added one shot to round out the team’s total. Andrews and Harkrader each had a shot on goal to their name Wednesday too.

Last season, when the two teams met, they ended their match with a 1-1 draw.

Eastern’s prolific attack Wednesday is adding to what is becoming one of the team’s narratives this season.

To add to that, Eastern’s goal total last year was 10, and the Panthers already hit the halfway mark of that total in five matches this year.

Lara has mentioned how he and his coaching staff and team have noticed a progressive increase and improvement in the team this year from the last few seasons, and a big part of that is the offense putting out more production.

Even though none of Eastern’s shots found the back netting Wednesday, firing off 14 shots could still be viewed as a positive for the rest of the season to come.