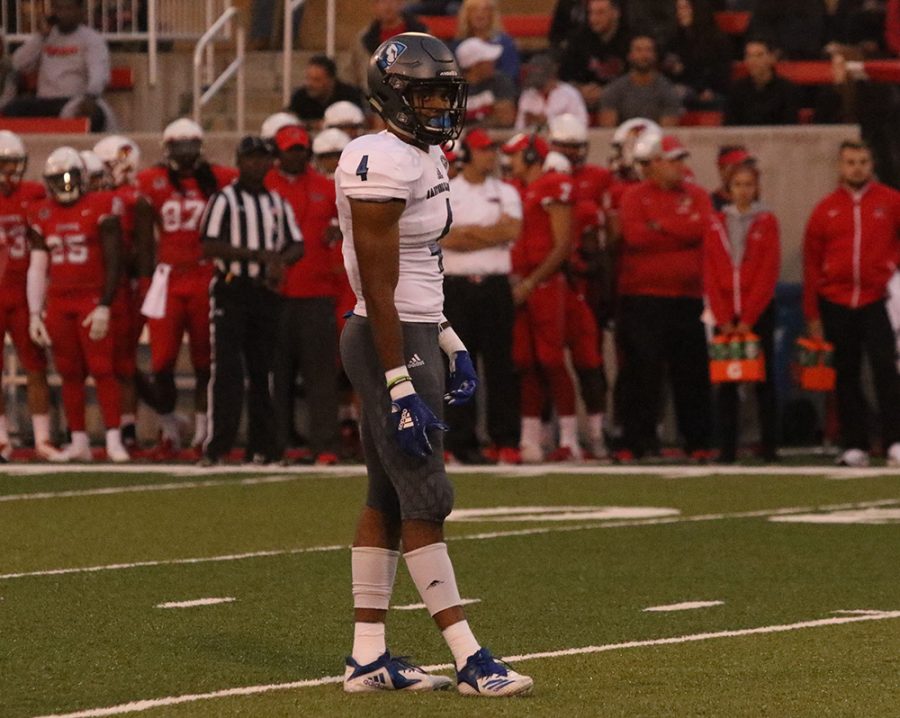 Eastern redshirt-sophomore saftey Raymond Crittenden stands in the defensive backfield in a 48-10 loss against Illinois State in week two. Crittenden is back as a starter after missing all of last season with a broken wrist.

If you were to travel back in time one year and comb the Eastern football team’s sideline, mottled amongst players suited up and those not suited up you would find sophomore safety Raymond Crittenden in the mix with the latter.

Crittenden, a two-sport athlete who plays football currently and also ran hurdles for Eastern’s track team, missed all of last season after breaking his wrist in fall camp. Fast forward back to the present, and you would not find Crittenden on the sideline; instead, you would find the now redshirt-sophomore starting at safety for the Panthers, a role they dearly missed him in last year.

“We really missed him last year because we were planning on him being a big part of our defense last year, and he broke his wrist during fall camp and it was tough, you know,” Eastern head coach Kim Dameron said.

Everyone can now put the struggles of not having Crittenden in the defensive backfield behind them, because now he is back. And since the beginning of fall camp this season there has been little doubt that Crittenden would not only step into a starting role, but also make a big impact on defense. All that can be credited to the hard work he put in during his recovery process.

Crittenden never missed a position meeting with the safeties while he was injured and tried to make it feel like he never left the team as much as possible, even going as far to help with making calls to the safeties from the sideline. But still, the completion of a successful recovery process was no walk in the park.

“It was tough,” Crittenden said. “It was a lot of mental recovery, taking reps, watching, learning more about the game of football. Really just taking time growing as a man.”

Crittenden played in all 11 games on special teams and as a reserve safety his freshman year, so he was used to being on the field and was most likely poised to play a much bigger role his sophomore year had the wrist injury not sidelined him. But now he feels his hard work has paid off and led him to a starting role this season.

Being a dual-sport athlete in both track and football speaks for itself as far as Crittenden’s athleticism goes. Being 6 foot 1 and 200 lbs, Crittenden is also fairly large for a defensive back; he also brings much-coveted length to the secondary with his long arms.

But what Dameron really feels has separated Crittenden from others is his smarts and instincts on the field.

“He knows what he is doing, he understands coverage, he understands what we’re trying to get accomplished defensively,” Dameron said. “But the big thing is he just has a knack and instincts, and that’s just kind of where people have separated themselves in this game. Some guys know what to do but just don’t have the instinct to do it, and he’s got both.”

Dameron said the instinct Crittenden possesses on the field is especially impressive for a player as young as Crittenden.

Crittenden tries to bring a certain vibe to the field when he is out there; to put it simply like he did, he plays with “swag and intensity.”

“Swag is just the way you play and the way you carry yourself,” Crittenden said. “When you hit someone and you get up, you have got to let them know that ‘I’m here.’”

Crittenden is joined in the secondary by all-conference cornerback Mark Williams, also a redshirt-sophomore, but the two go further back than playing together in Eastern’s secondary; they played each other in high school, and as Williams was quick to point out, his team beat Crittenden’s.

But, high school rivalry aside, Williams said he is very happy to have Crittenden back playing in the secondary and shared similar thoughts to Dameron on what the safety brings to the team.

“(Crittenden) is very football smart, so he adds a lot to our game,” Williams said. “He’s a great asset to our team.”

There were some bumps in the road for the secondary in the first two games of the season against Arkansas and Illinois State, but the corners and safeties are a confident and smart group, and if Crittenden can bring his intensity and swagger to the field every week, to put it in his words, “the sky is the limit” for the secondary.