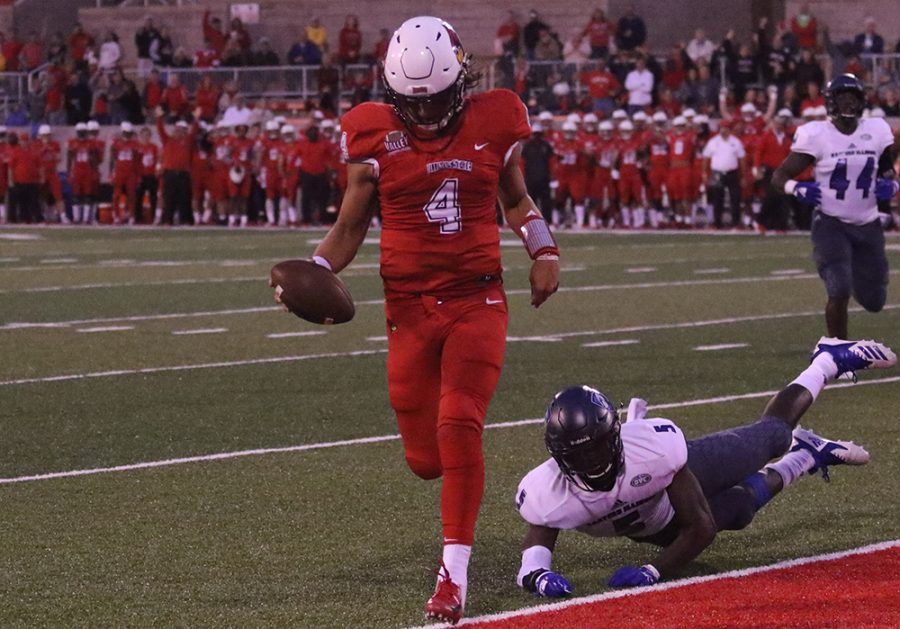 Illinois State quarterback Brady Davis crosses the goalline in a 48-10 blowout win over Eastern on Saturday. Davis had four touchdown passes as he helped the Redbirds drop Eastern to 0-2 on the season.

Exhale. That’s really all the Eastern football team can do after losing 48-10 to Illinois State in the 107th edition of the Mid-America Classic Saturday on the road.

It seemed that nothing went right for the Panthers in a game where they gave up 582 yards on offense, 328 through the air and 254 on the ground.

Up front Illinois State’s offensive line did whatever they wanted with Eastern’s front-seven, pushing players in whatever direction they pleased, opening up big holes for all-conference running back James Robinson, who finished the game with 154 yards and one touchdown.

Illinois State’s quarterback Brady Davis diced up Eastern’s secondary for 317 yards and four touchdowns on 17-23 passing. Outside of all-conference cornerback Mark Williams, Davis was able to pick on basically every member of Eastern’s secondary with great success. Eastern’s defensive backs were beat by five or six yards, sometimes even more, on multiple big plays throughout the game.

The deep ball was a problem for the Eastern defense in the team’s first game against Arkansas, and it got even worse against Illinois State, and as Dameron highlighted, personnel changes may be coming in the backfield.

The Redbirds had touchdown passes go for 42-yards, 97-yards and 33-yards.

Illinois State delivered dagger after dagger throughout the game. Whether it was on big passes, big runs or big defensive stops, the Redbirds truly controlled the game from the second the clock started to tick.

Eastern began the game with three drives that ended in punts, but finally, at the beginning of the second quarter, the Panthers found themselves driving down the field, eventually ending up at the Illinois State three-yard line.

It was there that the Panthers faced a 4th down and short situation in which they elected to go for it already trailing 14-0. Eastern tried to run the ball up the middle with Robert Columbus, but the Redbirds stuffed the play and got the ball back.

The very next play for the Redbirds was a 97-yard touchdown pass from Davis to Spencer Schnell. Dameron said this sequence of events might have been the first real backbreaker for Eastern.

On that fourth down run the Panthers elected not to use Jamal Scott, the team’s biggest running back, to try and punch in the ball. It was a decision that hung with Dameron after the game.

“That’s a conversation that we had on the headset after that sequence and that won’t happen again,” Dameron said.

It was plays the power plays that required push up front like the 4th down run that Illinois State seemed to make all game, while Eastern did not. This, Dameron said, all had to do with Illinois State’s physical dominance over Eastern.

“Both sides of the ball we just got physically whipped up front,” Dameron said. “Both sides, I mean it was obvious. It was apparent, we couldn’t run they could. They got pressure on our quarterback; we really didn’t get pressure on their guy very often. It was pretty one-sided.”

Illinois State had a tremendous amount of success running the ball around the edges where it seemed Eastern’s ends and linebackers had no answers for the Redbirds’ big tackles.

-Both Harry Woodbery and Johnathan Brantley played at quarterback once again for Eastern. Woodbery finished with 109 yards and one interception on 13 of 21 passing. Brantley was 9 of 15 passing with 52 yards. Brantley added 47 yards rushing.

-Jamal Scott was the lone bright spot for Eastern, he had 99 yards rushing with one touchdown on 17 carries.

-Linebacker Joe Caputo led the Panthers with 13 tackles. He also came up with one big solo stop on third down for Eastern.

-Eastern went for it on 4th down six times, only converting on two of them.

-All four of Eastern’s running backs got carries in the game. Scott led with 99 yards, Isaiah Johnson had 34 yards, Darshon McCullough had 20 yards and Columbus finished with just three yards.