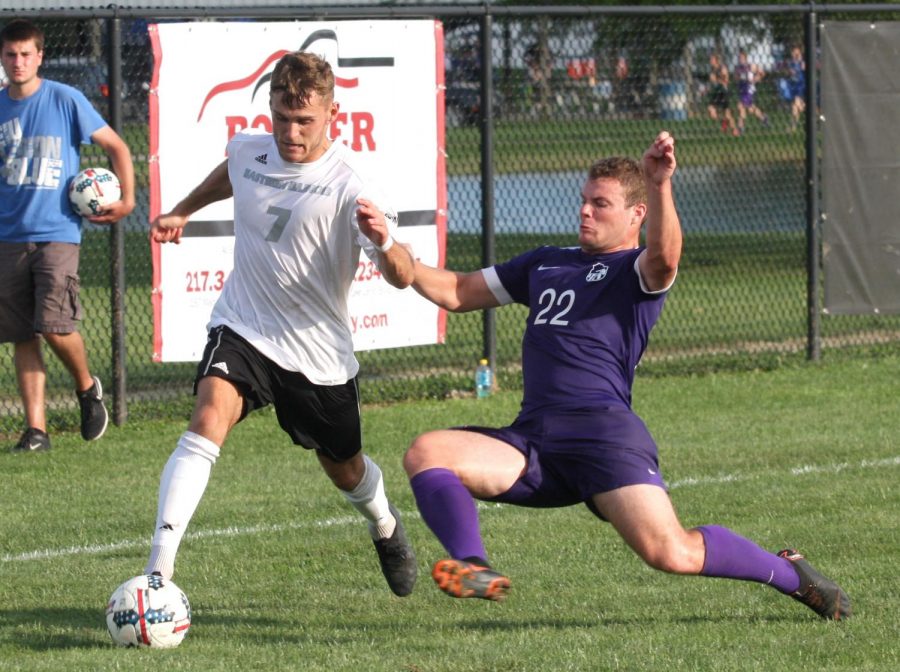 Eastern senior Jake Andrews tries to keep the ball away from an Evansville defender Aug. 31 at Lakeside Field. The Panthers tied with Evansville 1-1 in the game.

Even though the Eastern men’s soccer team has already made good on some things it wanted to do well this year, the team could still improve on scoring through its build-up play.

Defensively, head coach Kiki Lara has constantly stressed the need for defensive grit and all-around good play. On the offensive side of the ball, Lara and some players have said that scoring is needed too, since the Panthers are coming off last fall where they scored 10 goals in the whole season.

So far, Eastern has only given up two goals, while scoring three of their own.

But part of scoring is being able to get the ball into the opponent’s box and then finishing of course.

Moving the ball from the defense and through the midfield to the forwards is something Eastern wants to and needs to improve upon, and the team knows this.

Head coach Kiki Lara said creating opportunities and taking advantage of them is something the team can improve upon.

Against Cincinnati in the season opener, a 2-0 win for Eastern, the Panthers faced constant pressure from the Bearcat offense. Eastern had a good collective effort by clearing the ball out of its box and connecting the ball to the midfielders and forwards, who then got a few chances to score. Even though the team did not score off these stretches, they showed the ability and cohesion to connect play from the back to the opponent’s goal.

But this weekend will be the time for the Panthers to tighten any loose strings in its system before the meat of the season, along with conference play, comes along.

Without having a means to move the ball to score (build-up play), scoring against opponents as the season goes on will be tough to come by.

Scoring off set pieces and drawing penalties in the box are great and helpful, but what happens when the ref does not give you the call?

This weekend, Eastern needs to show that it can connect quick and accurate passes in the attacking third and get closer to goal for easier shots. Thus far, Eastern has done a good job of using its hybrid wing midfielders by having them drop on defense for help, then making runs to the corner and getting crosses off.

But to get the ball to someone at the 18-yard box, and having a run off them or another pass available for a closer shot is something Eastern needs to build up this weekend.

The good teams ahead, for example Denver in conference play, will be too disciplined to give up fouls anywhere near the box and will not allow open shots from 18 yards and further, much less anything at the top of the box.

So, if the Panthers can stretch the defense and intertwine themselves between defenders and get passes right in front of the net, the goals will come.

Eastern (1-1-1) will play Bradley (3-0-1) first this weekend on Friday at 7 p.m. as part of the Bradley Invitational. Eastern lost 1-0 to Bradley in overtime last year, and Bradley holds a 17-8-2 all-time matchup record over Eastern.

“Last few years we have gone to Bradley and played well in certain aspects of the game, and we want to continue that tradition and come home with hardware,” Lara said, regarding the invitational. “Three quality teams will be playing this weekend in Peoria and we want to showcase EIU men’s soccer in a great way.”