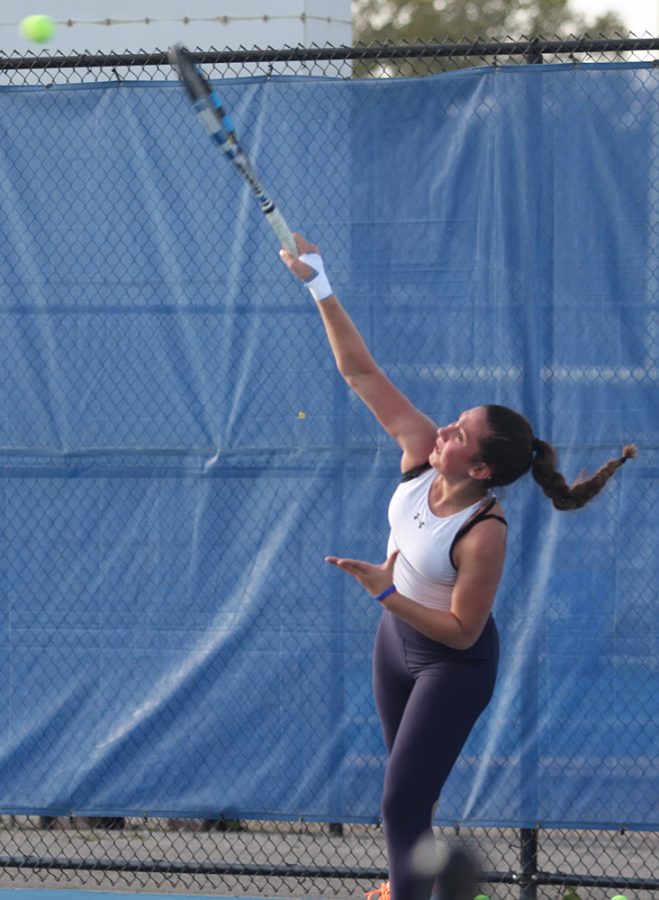 Sophomore Rachel Papavasilopoulos serves a ball in a practice this fall at the Darling Courts. Eastern will travel to Edwardsville this weekend for the SIUE Invite.

The Eastern women’s tennis team goes into the Southern Illinois University Edwardsville  Fall Invite with winning, improvement, and becoming better as a team on the players minds.

The team will begin their new season Friday at the Southern Illinois Edwardsville Fall Invite. New head coach Chris Tolson is heading into his first match with this team. Tolson is wanting the best out of his players this match, but would also like to see their improvement.

“I am looking for their attitude and effort this week. Making sure we are positive out there on the court. That we are taking a step forward in all of the areas that we need to,” Tolson said. “Playing smart tennis, playing good points, learning out on the court and expanding on those throughout the weekend.”

The women’s tennis team this year consists of players that have all played in this tournament before. Seniors Abby Carpenter and Srishti Slaria are both looking to help the team improve, but also begin their senior season.

“I think it’s the first one so everyone’s expectations are to compete well and play your best. Do what you can do and have a strong showing,” Carpenter said. “I want everyone to go out there, do their best, and never stop fighting.”

Srishti Slaria had a similar thoughts for this weekend.

“I think for me it’s just to give out my best on the court. Try to be consistent on the court and to stay on the points longer. I want to feel better on the court and gain more confidence on the court,” Slaria said. “I want to motivate everyone to do their best. Every year is a new year. Forget about the last year and focus on what will happen this year. Which is on coming together as a team and our big goal to win the OVC.”

Sophomore Karla Contreras won in her division at last year’s Southern Illinois Edwardsville Fall Invite. This weekend she is looking to play her best and looking forward to having a new coach with them going into this weekend.

“I’m going to try to play my best and have a good start to the year. I want to play as confident as I can and control the rhythm of the court,” Contreras said. “This is going to be our first time going out there with our coach, and Chris has been doing a great job so far. We are looking forward to this weekend and having a good start. We are going to fight together.”

Everyone’s mindset is to win and become better as a team. This weekend’s outcome is to begin the season, but also to improve and learn.

“The best outcome is for all of them to learn more about their games and to keep improving,” Tolson said. “For them to be able to find more confidence in their strokes and hits and for that to continue into the upcoming tournaments.”