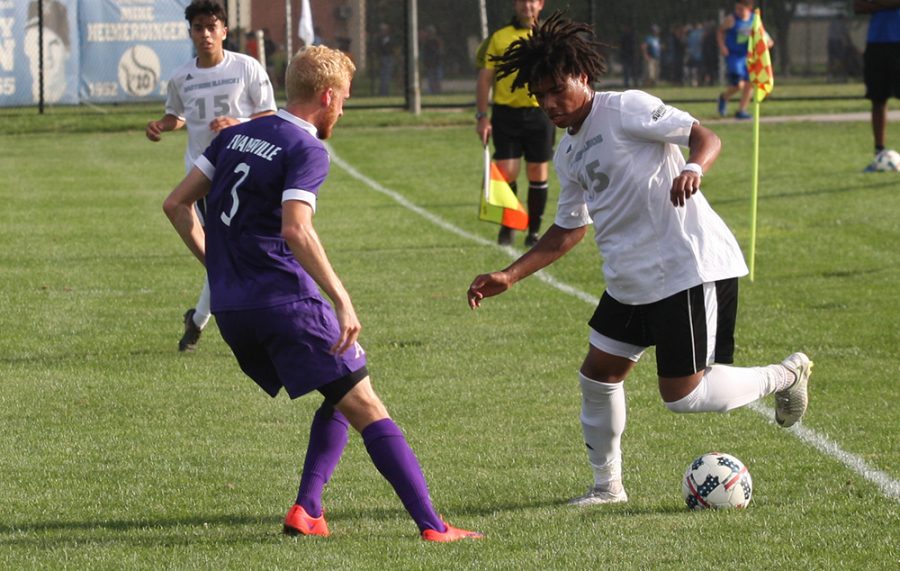 Eastern freshman Cole Stephens dribbles around an Evansville defender in the Panthers 1-1 draw with the Aces Aug. 31 at Lakeside Field. Eastern sits with a 1-1-1 record this season.

The Eastern men’s soccer team continues to tread in the middle of the Summit League pack after another week of non-conference play.

The Summit League announced its Offensive and Defensive Player of the Week awards Tuesday, and Eastern’s sophomore goalkeeper Jonathan Burke secured the latter of the two honors.

Burke spearheaded a shutout over Cincinnati in Eastern’s season opener and averaged 3.67 saves per match over the first three contests of the year.

Eastern as a team saw a subpar week, forcing a 1-1 draw against Evansville on Friday and falling to Green Bay 1-0 on Sunday.

The Panthers travel to the Bradley Invite this weekend to face Bradley on Friday night and Mercer Sunday morning.

The winner of the week undoubtedly goes to Denver, which defeated Washington 3-2 in double-overtime on Aug. 30 and stole a 1-0 win against SMU on Monday.

Denver senior forward Andre Shinyashiki continues to terrorize teams with his goal scoring, finding the back of the net in each of the team’s first three contests, including a hat trick against Monmouth.

With Shinyashiki at the helm, Denver remains as the only unbeaten team remaining in the Summit League and has moved up to No. 6 in this week’s United Soccer Coaches’ Poll, behind five major conference teams.

Previously second-ranked Summit League team Omaha has not witnessed the same success thus far, dropping to 0-3 after losses to Clemson on Aug. 26 and Missouri State on Friday.

Omaha has yet to score a goal this season, likely feeling the effects of losing last season’s two leading scorers, Elvir Ibisevic and Xavier Gomez.

Omaha’s slate will not get much easier, as it faces Utah Valley on Friday before heading to UCLA Wednesday.

Fort Wayne recorded 14 goals, including two in two games from Offensive Player of the Week Matthew Lieshout, to lead the conference over its first four matches despite being ranked last in the preseason poll.

Oral Roberts moved to 2-2 on the season and will play Houston Baptist Friday before facing Incarnate Word on Sunday.

Western Illinois has yet to find the win column this season after a 2-0 loss to Green Bay Friday and a 3-2 loss to Bowling Green on Sunday.

Western Illinois’s next matchup will be against Dayton on Saturday afternoon.