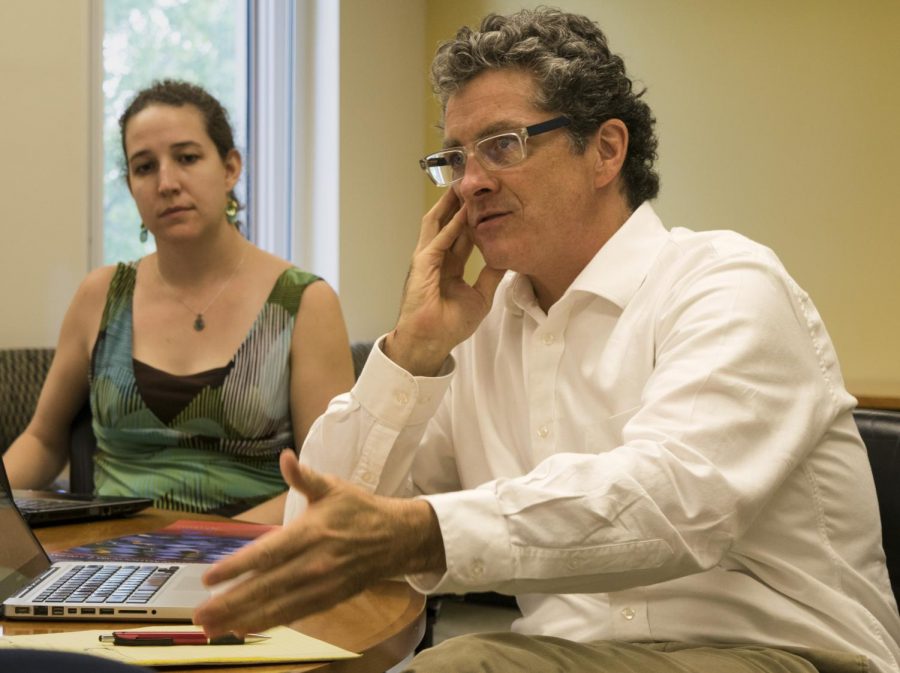 Steve Brantley is the head of reference and instruction services and a member of the Faculty Senate. The senate met Tuesday and discussed Unit B faculty participation on the senate, shared governance and a presidential lecture series.

The Faculty Senate discussed the role Unit B faculty should, or are able to, play on the senate, as well as shared governance and an annual lecture series at its meeting Tuesday.

Annually contracted faculty, a part of the overall Unit B faculty, make up from one-third to one-fourth of almost every department on campus, with some departments employing more or less ACFs.

Historically, there has been no involvement from ACFs in relation to the senate.

Unit A faculty are evaluated on their campus service, while Unit B faculty are not required to be involved on campus.

Provost Jay Gatrell said this lack of obligation should not matter, as being involved is important for all members of campus.

“I think the challenge for Unit B colleagues, as well as ACF, is to bring them into the community, to encourage them to participate and to actually invite them to serve,” Gatrell said. “(University) citizenship isn’t merely about evaluations. I believe there’s something bigger about what we do here everyday.”

Stefan Eckert, associate professor of music and senate member, said he is not sure that the lack of obligation is the only thing causing Unit B members hesitation.

“After talking with (music Unit B faculty), we decided not to ask them to serve because … there is a possibility they won’t have a job, and that is very different from Unit A,” Eckert said. “It’s kind of bizarre to say ‘oh, we want you to be a part of (senate) but no, no, (the university) might not actually have a contract for you’. I find that a little cruel because we have this issue that (music) could not function without (Unit B), and we talk about … including them, but at the same time if there is anyone laid off, it will be them before (Unit A) because of contracts.”

Gatrell said that historically, Unit B positions have been “extraordinarily stable” positions, and Eckert said that that is true, except when looking back at the past three years, which he said were extremely hard on Unit B faculty.

Eastern is an extremely different environment now than it was in the recent past, Gatrell said.

Without a contractual obligation, Eckert said, while it would be important to have their voices on the senate, it might be too much.

“We are basically asking them to do something for nothing,” he said.

Todd Bruns, scholarly communication librarian and institutional repository director as well as Faculty Senate chair, said he would be in favor of creating a set Unit B position on the senate in an effort to encourage someone from that category to run.

Ellen Corrigan, metadata and cataloging librarian and senate member, said she was worried about labeling the position.

“Does (setting a Unit B seat) come across as ‘hey, we have one seat for (Unit B) and then deters other people who might be interested from participating,” Corrigan said.

Bruns said he does not think that will be a problem.

“I don’t know how it deters them if they’ve never been (in the senate),” he said. “(Unit B) haven’t run for senate already, so I think if they have a seat, then it’s actually a step up from where we currently are.”

The discussion was tabled, with plans to start asking around campus to gauge Unit B’s potential interest in serving on senate or having a more defined voice on campus.

Shared governance was also discussed after feedback was received from the Council on Academic Affairs meeting two weeks ago by Jeff Stowell, a psychology professor and the vice chair of Faculty Senate.

Bruns said he did not see the need for a senate liaison that would attend CAA meetings and update the senate.

The issue stemming from the shared governance discussion is the comment from the Illinois Board of Higher Education in their evaluation of Eastern, which said that organizations on campus did not communicate enough.

Teshome Abebe, economics professor and senate member, said he agrees that a constant oversight would be too much.

“What (the senate) is trying to solve is a governance issue, not a curriculum issue,” Abebe said.

Bruns said he would support a resolution that included having CAA approvals of new programs listed on the senate’s agenda, and liaisons who would not attend every meeting but who would keep up with the other campus bodies minutes in order to better include the senate in decisions happening around campus.

The vote on this model of shared governance will happen at the next senate meeting, after Stowell has a chance to re-word his resolution.

Last year the senate passed a resolution to recommend the creation of a presidential lecture series, which would include Eastern President David Glassman and Gatrell and would occur annually.

Glassman took this recommendation, and has allocated money to the idea in order to entice speakers for the lecture, a topic for which will be decided on in the coming weeks.