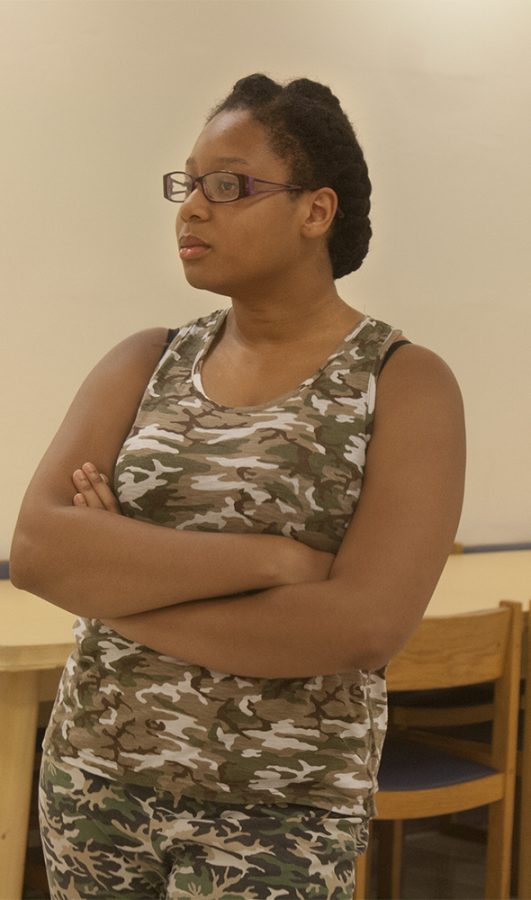 Dameron Smith, a freshman majoring in pre-nursing, tries out for Couture Models.

The Couture Models of EIU started their annual auditions to build a new, re-invented, group of male and female models at 7 p.m. Sept. 4 and 5 in Lawson Hall’s basement

During the tryout, the females trying out wore heels, while men were not required to wear anything special.

Each person was given the opportunity to practice with one of the past members and given three walk trials, with the last being their actual tryout.

Megan Jefferson, the president of Couture, said this year is all about focusing on building a very family-oriented group.

She joined Couture when she was a freshman after people told her she should model, and it became a fun hobby of hers.

“Everybody on the team is very dedicated, (we) make new friends and (we learn) to get comfortable with each other,” Jefferson said.

Jefferson said besides bringing people who are into doing walks and love fashion, they try to help people with less confidence to build themselves up into being a confident person.

She said photo shoots are something that helps people out a lot to build confidence.

Essence Dildy, a junior kinesiology and sports studies major, is a general member of Couture.

She said this is her third year coming, and she has kept coming because it brings people together and builds a lot of friendships she is grateful for.

“(There are) a lot of positive energy and good vibes that (Couture) gives off,” Dildy said. “I like that Couture accepts people.”

He said he enjoys it because he is into men’s fashion and said it is his time to show who he is as well as his time to be confident.

“I’m into fashion,” Usikalu said. “I like to dress up, and if I am not dressed-up, it shows I do not care about that day.”

Usikalu said more men who are into doing walks and into fashion should join the Couture modeling, since he said there are currently around five men and a lot of ladies.

Couture Modeling meets every Tuesday and Thursday from 7 to 9 p.m. in the Dounda Fine Arts Center’s Black Box.

Jefferson said to stay tuned to what EIU Couture will have to show this year.