Spirituality Club sees the fruits of their labor 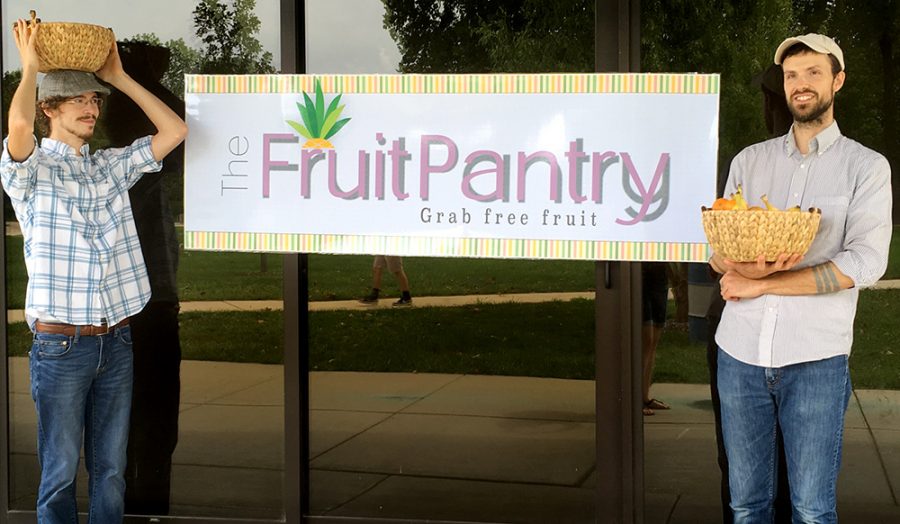 Alex Hill, the vice president of the Spirituality Club, and Josh Harden, a club member, offer passing students free fruit. “We may run out,” Hill said. “Apparently people like fruit.”

The Eastern Spirituality Club hosted the first of several Fruit Pantry events in which the club members gave free fruit to students in the Library Quad Wednesday.

Ali Hill, the president of the Spirituality Club, said the group believes giving food to people is one of the best forms of service.

“We want to serve people,” Hill said. “This is our way of doing it.”

Roy Lanham, the campus minster for the Newman Catholic Center, said he thinks it is great that the Spirituality Club is offering students a healthy snack.

“We have opportunities each and every day of our life to have an impact, either for good or for ill,” Lanham said. “(The Spirituality Club) choosing to do it for good and that’s just cool.”

Taylor Bishop, a junior sociology major, just transferred to Eastern, and she said she thinks the Fruit Pantry is a great event for the students on campus.

“It’s kind of nice that (Eastern has) all these events and stuff,” Bishop said. “It’s really nice to get out and meet everybody.”

Alex Hill, Ali Hill’s husband and the vice president of the club, said the Fruit Pantry is the group’s way of trying to manifest their own spirituality.

“When you practice (spirituality) in whatever way that you do, the fruits of that ultimately should show,” Alex Hill said. “You should be more compassionate. You should be more loving and gentle, and generous and so on.”

According to Ali Hill, the basis of the Fruit Pantry is serving unconditionally.

“It doesn’t matter who we give it to, who we don’t give it to,” Ali Hill said. “Ours is just to have the opportunity to serve others.”

The event as well as the club itself has seen much more positive feedback than in the past.

“People have expressed a lot of interest,” Ali Hill said. “That’s kind of unusual for us, so I’m excited to see where it goes.”

The Spirituality Club also has several other events planned, including one about eating mindfully and listening to one’s body as well as an event about spiritual pluralism, which includes ideas of diversity and coexistence.

“Along with that idea you encourage people to follow what resonates with them,” Alex Hill said.

The club also plans to host an event near the end of the semester to celebrate Mawlid, the birthday of Muhammad, with a concert featuring the Sufi musical group Ahl-e Qulub.

Ali Hill said in the past, the Spirituality Club celebrated Rosh Hashanah by handing out traditional pastries on campus with pamphlets attached to educate students about the holiday.

“People with a Jewish background felt really amazed that something like this exists on campus,” Ali Hill said. “They were amazed that people actually cared, so that was really nice to see people get excited about that.”

The Spirituality Club is open to all students and is sponsored by a non-profit organization called Mindfulness in Higher Education.

There are no commitments or fees required to join.

“You can take whatever you learn from the sessions and keep it for the rest of you’re life,” Ali Hill said. “We don’t expect anything from anybody.”

The Fruit Pantry will continue to happen every Wednesday from 2 p.m. to 3:30 p.m.