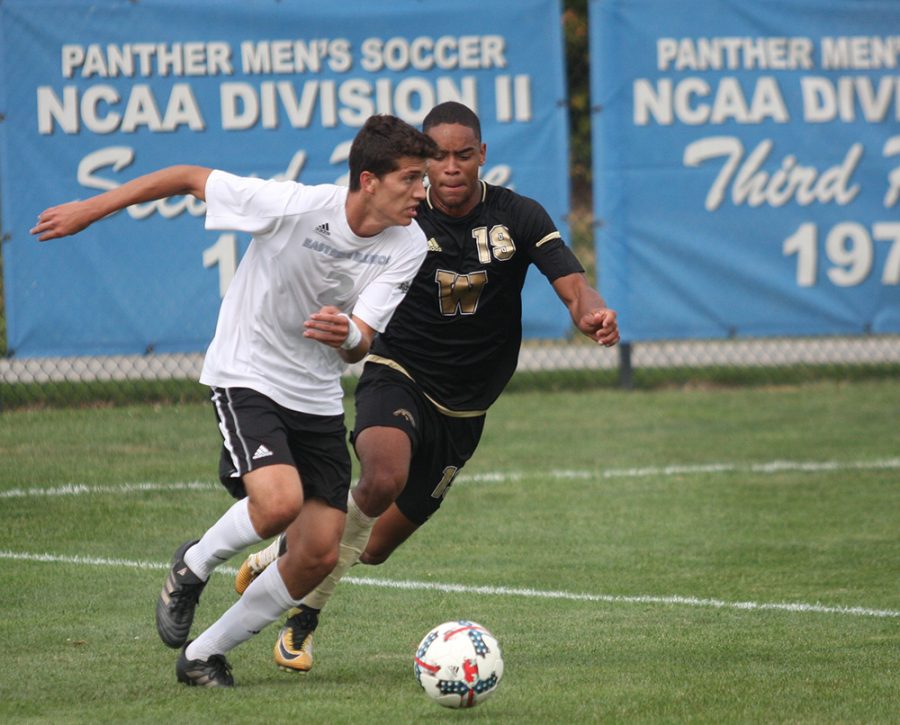 File Photo | The Daily Eastern News Eastern’s Edgar Mesa pursues a ball in a game last season at Lakeside Field against Western Michigan. Mesa was named one of two Eastern players to watch in the Summit League.

One big question facing Eastern’s men’s soccer team before the season was the team’s ability to score.

Last year, the team scored ten goals for the entire season, had a seven-match scoreless streak and its leading scorer had only three goals.

So this year, head coach Kiki Lara was looking for a few things from his attacking pieces: getting chances to score and finishing those chances.

Already Eastern has shown it can do both, and one thing that will help the team continue to perform well on offense is its depth.

The Panthers have multiple options when it comes to scoring, both in offensive starters and substitutions, and defensive players pushing up to help apply pressure.

“We’ve got depth everywhere, defensively, offensively, that’s one thing the team has been built to be,” Lara said. “That’s something that we pride ourselves in here on this roster is understanding the game and one to two positions to understand that if they get put in that role they can execute.”

In Eastern’s first match of the season, a 2-0 victory over Cincinnati Monday, senior midfielder/forward Toby Andrews and redshirt-junior midfielder/forward Christian Sosnowski both scored for Eastern. Sosnowski is a player whom Lara said will be important for the team this year, and Andrews, along with his twin brother Jake, both can move the ball and take shots on goal.

The lone senior on the team, midfielder/forward Kris Luke, will be an experienced leader for the offense’s attack, and redshirt-freshmen Zabdiel Justiniano and Cameron Behm both provide speed as a forward and midfielder.

With this much depth up top and in the middle of the field, the Panthers have plenty of options to get to goal.

But, as Lara has told his team, getting to goal is not possible without well-executed build-up play, or the passes and runs that get the ball from Eastern’s own side of the field to the opponents’.

“It was better than (the DePaul game),” Lara said, referring to Eastern’s build-up play from the DePaul exhibition match to Monday’s season opener. “We’re making gains on that every time we step on the field.”

Build-up play often starts with the defense, when it clears the ball out of the defensive third to the midfielders, who then connect passes to the forwards, and so far, the defense has fulfilled its task within the system.

During the second half Monday, Cincinnati applied more pressure to the Eastern defense after only attempting one shot in the first half.

Aside from obviously defending the goal, the defense helped itself out while also giving the offense some chances to score with build-up play. By clearing the ball away from the goal and starting the chain reaction, the defense gave itself some breaks from the constant attack and helped give the attackers some scoring chances.

To also round out the depth the offensive attack, Eastern’s defenders will be important players on free kicks and corner kicks, specifically junior Edgar Mesa and sophomore Erik Isaksson. Both are tall bodies who can win headers.

Isaksson scored a header off a free kick against DePaul, and Mesa had an assist last year and can push up into the midfield to help out.