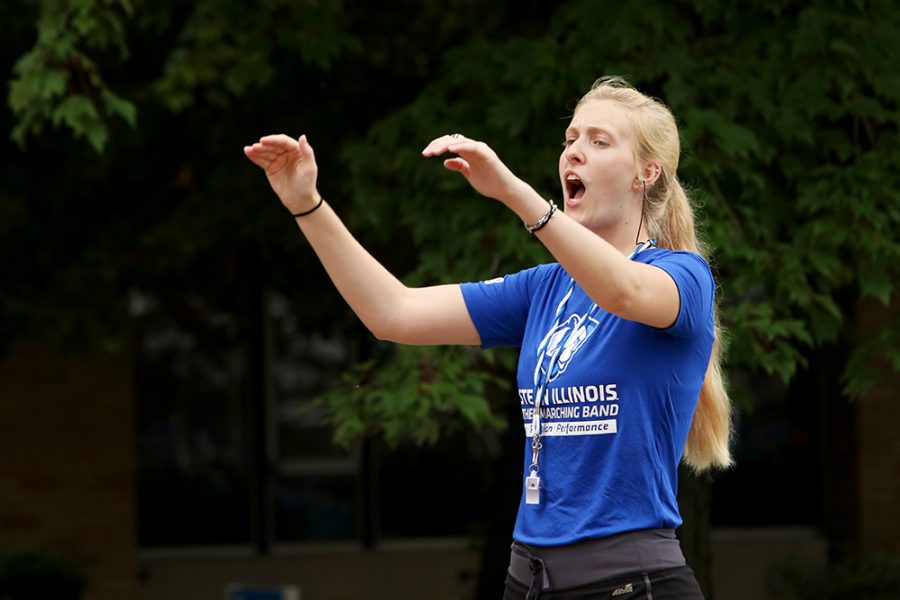 Robyn Heitman, one of the drum majors for for the Panther Marching Band leads the band in a performance on move in day Aug. 16 outside of Andrews Hall.

At 4 p.m. on the dot last Friday, members of the Panther Marching Band, assembled on the Tarble Arts field for practice despite light rain and a cool breeze. Benjamin Druffel, assistant director of bands and director of athletic bands, walked onto the field for his third year in the position. The band practices three times a week from 4 to 5:50 p.m., and Druffel said typically the structure for each practice begins with members playing a warm up with their instruments or doing a marching walk warm ups where members practice their marching skills.

Friday was the first time members practiced this year’s set without music and instead counted the beats out loud while walking and twisting and turning their bodies to make intricate designs on the field. Those designs the members made will be paired with the music they have been practicing and create the different shows for the year including the first performance at the first home football game. “Right now since it’s early in the season we’re actually starting with a physical warm up. Even though we know how to march, as time goes on bad habits start to creep in sometime, so we always have to do that to make sure we’re finding it always in tip top shape and doing the marching correctly,” Druffel said.

He said after practicing sets for an hour, band members then do a warm with their instruments and then put the sets they just practiced to music, all of their bodies moving together in harmony and sync with the music, adding the finishing touches to their different routines. “We perform all the home games that we have here, plus we also play for the Panther Marching Band Festival, which is a contest we invite high school students to come and compete and we perform that as well,” Druffel said. “We also perform for the Homecoming parade and some other performances and parades around the area if possible.”

Savannah Ettien, freshman pre-med major, plays the flute. She said she is looking forward to performing at the first home football game. “The rush you get after you get off the field, the adrenaline is amazing,” Ettien said. Abigail Emmert, junior music education student and a drum major for the band, said she likes how some songs they play feel very powerful and that she is able to help conduct them. “One of our responsibilities is helping people set their dots on where they’re supposed to go,” Emmert said. “I’m also up there giving the beat pattern to help make sure everyone is following the tempo.” At the end of the practice the band played Eastern’s fight song and sang the Alma Mater.