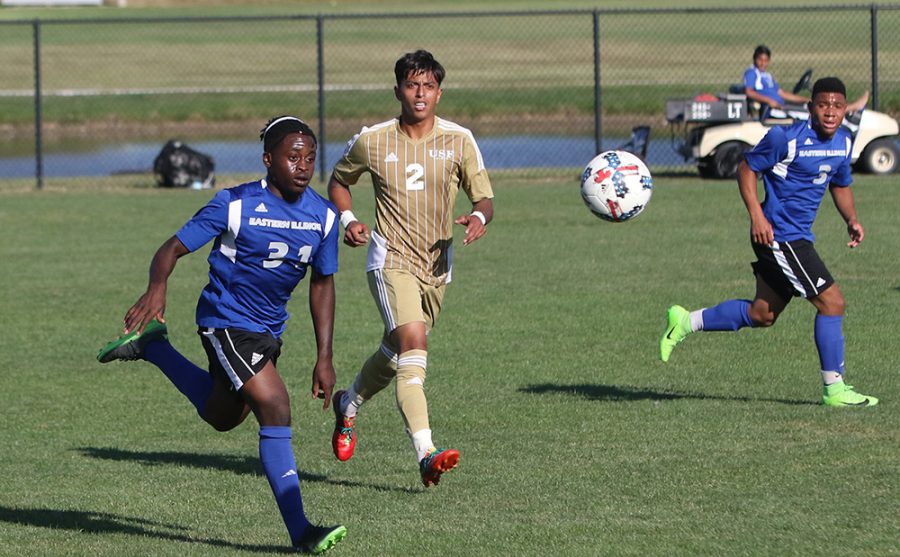 Eastern senior Kris Luke pursues a ball in a game against Saint Francis last season at Lakeside Field. Luke is the lone senior on Eastern’s roster this season.

Defense is not the only thing the men’s soccer team has stressed during the preseason, but it is the thing the team has talked about the most.

Head coach Kiki Lara and players alike have said that defense is what the team has prided itself on for the past couple of years, and this season will be no different.

Lara has said that he is looking for his team to maintain a defensive grit during the matches, and junior defender Edgar Mesa has said that one thing the defense needs to do well is connecting the ball from the defensive third to the midfield and attacking third.

But Jonathan Burke, the redshirt-sophomore goalkeeper who will be the starting goalkeeper for Eastern, talked about two other aspects of the defense’s play that he thinks need to be good.

He said that so far he and the defense have been communicating well, adding that they need to continue to do that. Also, he said another thing the team is big on is keeping possession of the ball in the team’s own defensive third and connecting short passes to look for an opportunity, instead of just kicking the ball downfield.

For himself personally, he thinks just getting more touches will help him this year.

“It’s more of a confidence thing, growing with the team and figuring everything out,” he said.

He added that with each match, he has been getting better.

The leaders on defense this year will be Mesa and sophomore Erik Isaksson, who were both named to the 2017 Summit League All-Newcomer team.

The first regular season match for the Panthers is Monday at Cincinnati at 7 p.m. Last year, Cincinnati finished the season 7-9-1 with a 0-7 conference record.

Unlike Eastern, Cincinnati has already opened its season, walking away from a 1-0 overtime loss to Northern Illinois.

If the Bearcats’ loss is any indication of what Eastern can expect for its match, Burke and the defense will need to be ready to make some stops and saves.

The Bearcats took 12 shots in the match, with five of them registering on goal.

Cincinnati also has its leading scorer from last season returning in redshirt-junior Austin Smythe, who had five goals last year.

In the all-time series between the two schools, Eastern and Cincinnati are tied at four wins each. The last time the two met was late in the 2016 season, with the Bearcats taking a 3-1 victory.