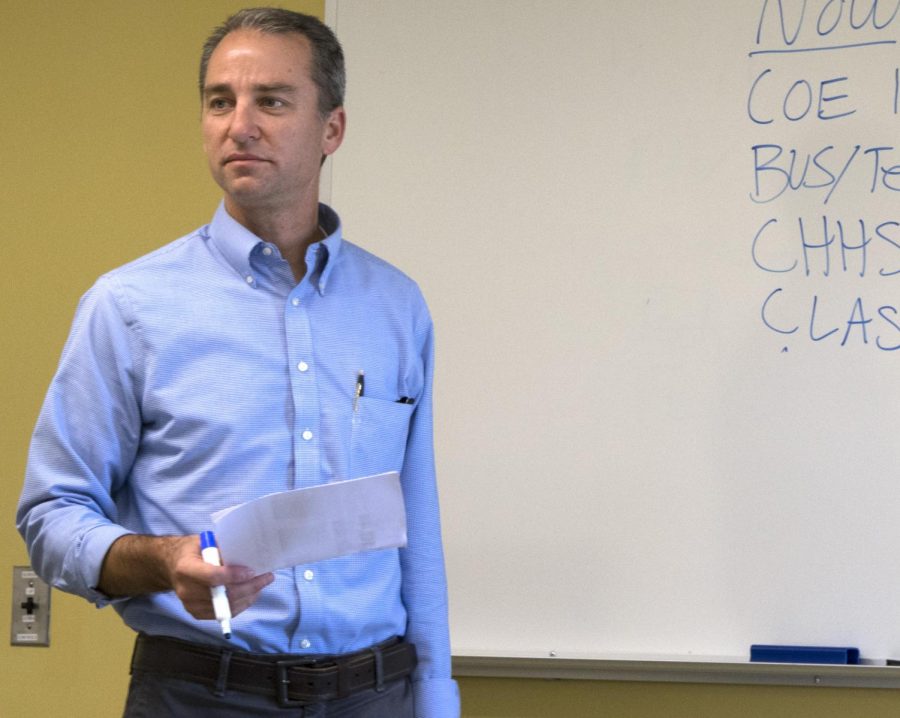 Jeffrey Stowell, a psychology professor as well and the vice chair of Faculty Senate, drew out a plan to potentially change the make up off the Council on Academic Affairs during its meeting on Thursday. The plan would not change the number of faculty members on the council, it would only change a couple of their titles.

The Council of Academic Affairs, which has been working under suspended bylaws for the past year, will start to reinstate and update the bylaws as changes resulting from the “year of transition” continue around campus.

Jeffrey Stowell, a psychology professor as well as the vice chair of Faculty Senate, was at the CAA meeting to discuss possible ways to increase shared governance at Eastern and to look at ways to update how the council is made up.

“Last year we were talking about the relationship between the faculty senate and the major bodies on campus,” Stowell said. “There most likely will be a member of the senate assigned to be a liaison who would probably regularly attend (CAA meetings) and be monitoring curricular changes in each of these bodies.”

Stowell also said the senate was considering taking a more active role in curriculum approval itself.

”(Faculty Senate has) yet to discuss this in detail, hopefully at our next meeting, but part of the initiation of discussions that we had last year on campus, about shared governance and curricular approval processes,” he said. “Is faculty senate going to take new programs that require an (Illinois Board of Higher Education) approval under (the Senate’s) commission to own a sense of curriculum coming from this body?”

This change would mean any new course proposals that the CAA approves, instead of going to the Provost, would go to the senate for another stamp of approval before it would go to that next step.

Many CAA members, such as Rebecca Throneburg, a communication disorders and sciences professor, said they do not like this proposed added step to the new course proposal process.

“Putting Faculty Senate at the top of the hierarchy, when it’s not representative, and that doesn’t have any process relating to those below it, bugs me,” Throneburg said.

Marita Gronnvoll, associate chair of communication studies as well as the chair of CAA, said she did not see a need for this change.

“It seems like we’re trying to solve a problem that we don’t have. Because I could see if CAA was completely populated by people who had been appointed by the Provost, or by the VPA’s office, but we’re all elected,” Gronnvoll said. “I don’t understand why we’re adding an extra layer of approval of more people that were elected. Most people have been here for years serving on CAA, and are very familiar with the curriculum, so I don’t understand.”

Stowell said he thinks some faculty senate involvement in the curriculum process would be positive.

“We trust (CAA) in approving programs, but I think we need to have a little more explicit interaction with curriculum from Faculty Senate,” he said.

The council said it thinks the best way to improve the lack of shared governance noted by the Higher Learning Committee would be to send a non-voting senator as a liaison to the major bodies on campus without them having a say on approving curriculum.

The general education coordinator position proposed by the CAA is not being created until further moves with the transition process are made.

Throneburg said, with 95 percent of general education courses being found in the new College of Liberal Arts and Sciences, the council should consider sending a representative to the college curriculum meetings to focus on the development of the general education programs while the coordinator position remains an idea.

No official decision was made on any discussion items, with an official response waiting to be made until the new colleges and new committees become more stable.