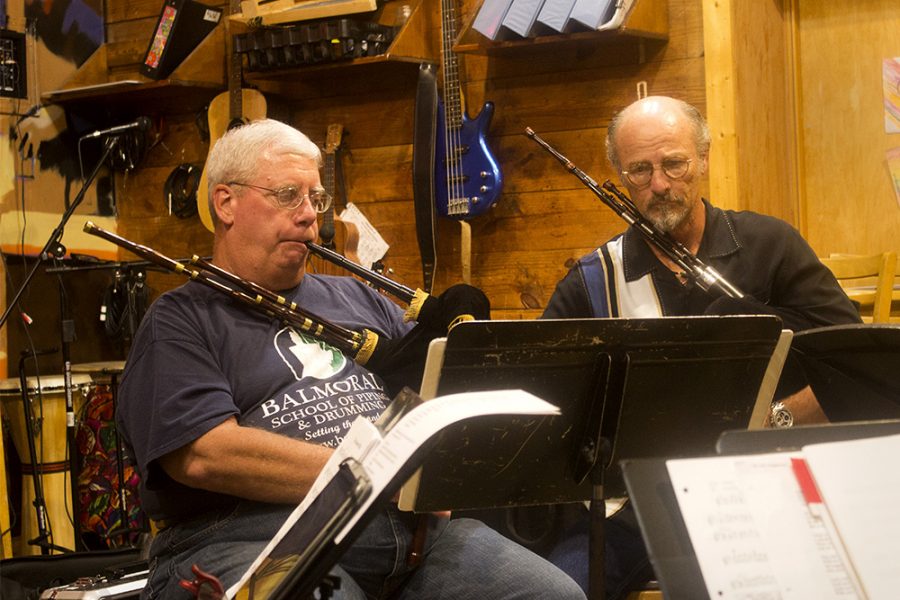 An undeniable energy pulsed through the floorboards at Jackson Avenue Coffee Tuesday evening as the Irish Music Circle band performed.

To choose what music was performed, the band went around in a circle ahead of time and selected a song just as in Irish pubs.

This among other things lent to a palpable camaraderie between the members of the group.

Gaye Harrison, founder and fiddle player for the Irish Music Circle, said the performance on Tuesday night was a trial run for the band’s performance at Night of HOPE in September, also at Jackson Avenue Coffee.

Harrison started the band after retiring around six years ago.

“I just really wanted to explore that kind of music, and I was so surprised when other people said, ‘Yeah we’ll come,’” Harrison said.

Harrison added that, while a core group of people had been fairly consistent for the band, they have had several new people show up to events as well.

Harrison said some of her favorite music to play is that by Liz Carroll, an Irish-American fiddler and composer from Chicago.

“I’ve known her for probably 30 years,” Harrison said. “She’s played all over. She played for Obama in the White House.”

James Trevarthan, another fiddle player for the group, said he has been a part of the band since the beginning.

Trevarthan said his favorite song to play is “Irish Washerwoman.”

“It’s the one that got me started playing on the fiddle, so it has a special place,” Trevarthan said.

Gary Rollings, who plays the bodhran, an Irish frame drum, for the group, is one of the newest members.

According to Rollings, the band was lacking a percussionist, so he took up playing the bodhran drum around two years ago.

Hinson identified “The Big Spree” as his favorite song, which falls under a type of Scottish music called Ceol Mor. According to Hinson, the tune is either about a drunken blacksmith or refers back to when certain religions were illegal.

“There were three tunes called the sprees: ‘The Little Spree,’ ‘The Medium Spree,’ and ‘The Big Spree,’ and supposedly which was played would tell the level of priest who was coming in to administer sacraments,” Hinson said.

Hinson was also a graduate student at Eastern. He recalled an event involving his playing during his time on campus.

“One of the EIU police came up and I was out playing in that field south of Tarble,” Hinson said. “He said, ‘There’s nothing wrong, we just pull pranks on each other,’ and so he came down to broadcast me over their walkie-talkies or whatever.”

Lance Beever, a guitarist for the band, said his once nearly empty music binder was overflowing with tunes since joining Irish Music Circle.

According to Beever, his favorite part of being in the band is the interaction with the musicians and the audience.

“You kind of feed off the energy of it,” Beever said.