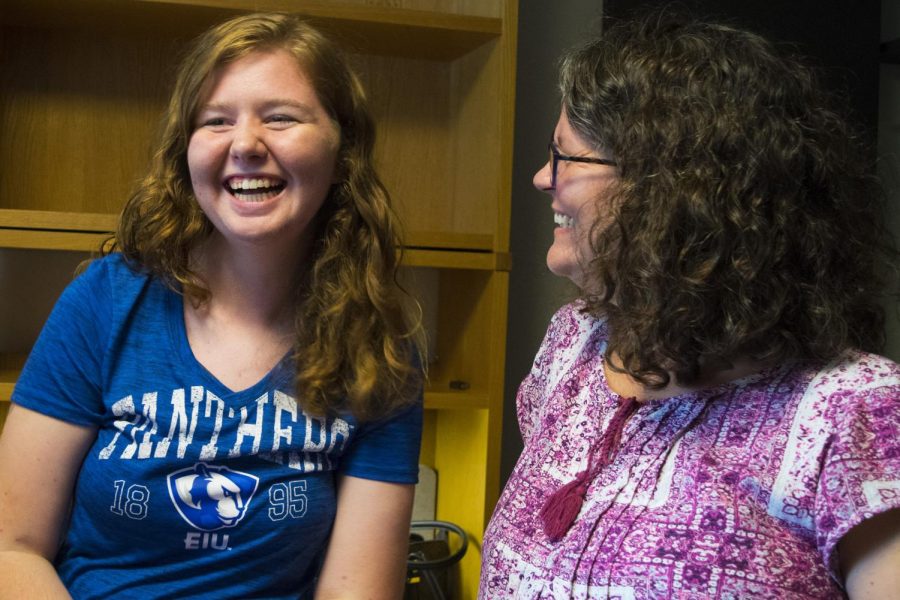 Freshman graphic design major Rachel Mette and her mother Lisa Mette, talk in Rachel Mette's undecorated dorm room in Andrews Hall Thursday morning during Eastern's move-in day. Rachel Mette was one of many freshmen and transfer students who moved into Eastern on Thursday.

A box slid off her precarious structure as Rachel Mette dove to make sure nothing got broken in the fall.

Rachel Mette, accompanied by her mother, father and brother, walked into her new home for the first time and prepared to say goodbye.

She, along with many other freshmen and transfer students, moved into their dorms on Thursday with the help of their families, Eastern staff and volunteers during Eastern’s move-in day.

As the first of her siblings moving away from home and into college, Rachel Mette chose Eastern because of its close location to her home.

“(Leaving home is) going to be different because I have four other siblings,” she said. “Now it’ll just be me and my roommate.”

Rachel Mette’s mother, Lisa Mette, was nervous for her first child to be moving away but hoped it would be a good learning experience for her daughter.

Lisa Mette and her husband are glad Rachel Mette has the opportunity to branch out, even though she is not continuing an education through their alma mater, Illinois State University.

Many parents shared Lisa Mette’s bittersweet feelings on Thursday, and Lauren Bergholz, the complex director for Andrews and Thomas Halls, was there to assist students and their families during the goodbyes.

Bergholz has been a part of move-in day for three years now, and she said she is excited to be able to interact with so many new students this year.

“(Thomas Hall) is like 95 percent freshmen,” she said. “We’ve got a huge, new freshman class, which is exciting.”

Bergholz said she was also excited about the idea of move-in day itself.

“Move-in day is (in) my top three favorite days of my job,” she said. “Getting to watch students excitedly move into their rooms and their parents are here, it’s really exciting to see parents get to experience move-in as well.”

Her favorite part of this day is getting to help families by taking pictures for them.

“I catch parents saying goodbye to their kids and I offer to take a picture,” she said. “I didn’t get a picture with my parents on move-in day, so I really try to catch parents and ask them, ‘Hey, have you taken a picture together today?’ because this is a day you’re going to remember.”

Bergholz’s advice for new students was to get involved.

“Go to everything,” she said. “Just go. Even if you think you’re going to go alone, you’ll find someone once you get there. Don’t be afraid to knock on someone’s door.”

Rachel Mette had the same idea in mind when crafting her goal for her freshman year, which she said was to “let new adventures come.”

While the Mette family moved Rachel Mette’s remaining belongings into her new room, her mother reflected on how life will be with her first child away at school.

“It’ll be hard for me, I’m sure,” she said. “But I think that she’s ready for a new chapter in her life. I remember when I moved away. I was so excited, I didn’t even think about how my parents would be feeling.”

She also gave some advice to other parents who are sending their children off to college for the first time.

“You have to cut the chains off,” she said. “I think college is important. They need to do this.”

As for the students, she said to have fun and learn from every mistake.