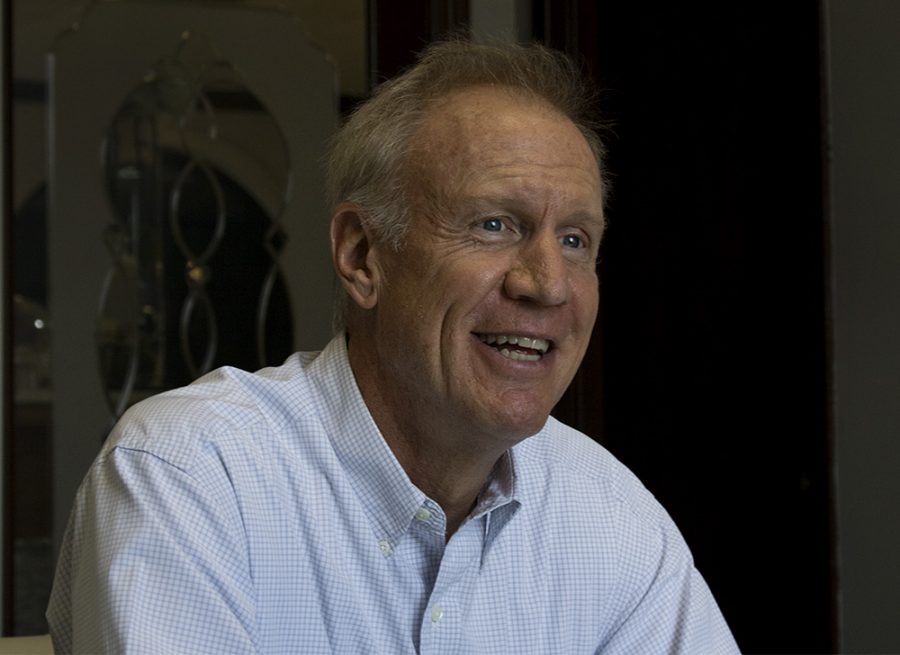 Gov. Bruce Rauner denied Monday that the creation of a government website that asks employees to notify the State of “changes in their union membership status” was misleading but was instead a necessary way to give information regarding the Supreme Court’s Janus ruling on public sector unions.

“That’s not reasonable. What we did was just let every state employee know the ruling and what their rights are under the ruling,” Rauner said Monday before a question-and-answer round table with some business owners in Charleston.

The press was not allowed to sit in on the question and answer session.

The website, Team Illinois Union Status, and an email sent to state workers, said that the state will cease to deduct fair share fees from the paychecks of non-union members and asked for their membership status this caused controversy last week after the Supreme Court’s ruling on public unions’ fair share fees (Janus v. AFSCME).

The Supreme Court ruled 5-4 last Wednesday that government workers cannot be forced to contribute “fair share” fees to public sector labor unions that represent them in cases such as collective bargaining because it violated the First Amendment as forced political speech.

However, the American Federation of State, County and Municipal Employees, the largest trade union of public employees in the U.S., said the email is misleading and it encouraged people to leave the union, according to an article from WGN.

Rauner called the decision a “historic win” for free speech and freedom of political affiliation for public sector employees and a “huge victory” for tax payers.

“You know people spin this ruling or me as being anti-union; I am not anti-union. I want more union jobs, I want more all jobs in the state of Illinois, union, non-union I want more pay for everybody,” Rauner said. “What I’m against is conflicts of interest.”

He said what happens too often in government is that government union leaders have too much influence over politicians they negotiate with.

He said those union leaders could potentially fund political campaigns and once those politicians are elected, it is assumed that unions can start negotiating contracts under the idea that those officials will be “nice” to them because the union “got them in office.”

Rauner referred to this as the conflict of interest.

“Even Franklin Roosevelt, a Democrat, he was one of the strongest union supporters of any president in America, he was very pro trade unions, pro private sector unions, just like me,” Rauner said. “But (Roosevelt) said in government the union is organized contrary to tax payers and to have unlimited power and for them to have influence over politicians they negotiate with. It’s a conflict.”

Rauner said the ruling is important because everything a government union does is political by nature.

He said whether those government unions are negotiating or advocating, they affect tax payers, government policy and government spending and are, therefore, political.

But the ruling could mean negative implications for public sector unions.

A Chicago Tribune article comparing what could happen in Illinois as a result of the Janus ruling to what has happened in Wisconsin, said the ruling “could significantly reduce public worker union membership in Illinois and other states.”

Another article in The New York Times, said the ruling could result in the loss of “tens of millions of dollars” for public-sector unions across the nation, who are already under political pressure, and “they can see their effectiveness diminish.”

Yet, in the majority opinion, Justice Samuel A. Alito Jr. wrote, “We recognize that the loss of payments from nonmembers may cause unions to experience unpleasant transition costs in the short term, and may require unions to make adjustments in order to attract and retain members, but we must weigh these disadvantages against the considerable windfall that unions have received.”

So far, according to WGN, AFSCME said the court ruling is already having an impact, after hearing from members who already expressed interest leaving the union.

But EIU-UPI President Jonathan Blitz said that although some people called to resign from the union, Eastern’s chapter now has more members now than it did a week ago.

“People see the danger,” Blitz said. “I think the majority of people…recognize that (unions are) worth having.”

Blitz agreed that the ruling is a way to weaken unions, calling it a bid to destroy unions any way possible.

“It’s no secret that Rauner hates unions and it’s probably the one thing that animates him more than anything, he just wants to destroy unions,” Blitz said.  “The question is ‘why is that?’ Well, he’s a rich man and unions are a hindrance to what he would like to do.”

Moving forward, Blitz said he is not sure as to what might happen.

The law states that unions are required to represent non-union members and this is still the case under the Janus decision, Blitz said.

Before, Blitz said, there was not a case where a person in the bargaining unit would not contribute union dues but still reap the benefits of their collective bargaining contract agreements or representation.

“Now we have people who will reap the benefits of those efforts, which cost money, but not pay any support,” Blitz said.

Blitz said the ruling is just another attack on unions, except this one was orchestrated by the governor making it more personal.