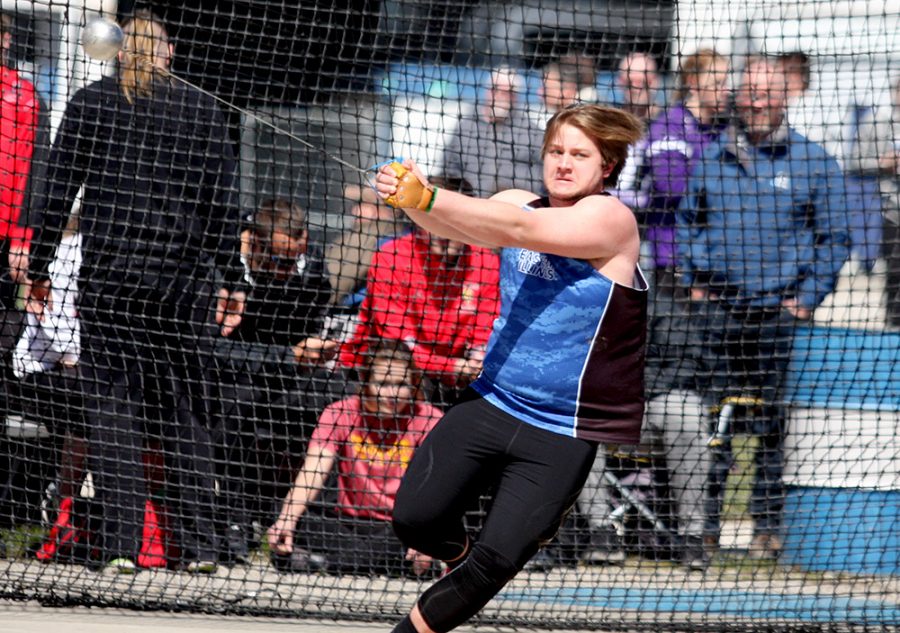 Freshman Dillon Birch competes in the men’s hammer throw at the Panthers’ EIU Big Blue Meet March 30 in the field behind O’Brien Field. Eastern will have a split squad meet at the Drake Relays and the Louisville Twilight.

Beginning with this week’s Drake Relays, the Eastern track and field team will begin to wrap up its season.

The meet begins Thursday and will feature a few of Eastern’s top competitors. The rest of the team will head down to Kentucky for the Louisville Twilight Meet.

This will be the second consecutive meet that the team will send two different groups to compete in. Last week most of the team traveled to Indiana State for the Pacesetter meet, and then eight competitors went to California for the Mt. SAC Relays in California.

Both squads found success at their respective meets last weekend. Baldwin had a career day at the Mt. SAC Relays as her 10,000-meter run time of 35:28.08 minutes vaulted her to second all-time for Eastern in the event. Also at the Mt. SAC Relays, senior Darneisha Spann posted a 100-meter hurdle time of 13.95 seconds, that ranks fourth in school history.

In the field events, junior Joe Smith placed first in the triple jump with his mark of 49’1.75”, and went on to finish in second place in the long jump with a distance of 22’4.50”.

The two sets of teams that will compete this week look will look to repeat their multiple successes as they near the end of the outdoor season, May 10 at the OVC Outdoor Championships.

This week’s meets will begin with the Drake Relays starting Thursday and running until Saturday. The Louisville Twilight meet will commence on Friday and run to Saturday as well.