Students march against sexual violence at ‘Take Back the Night’ 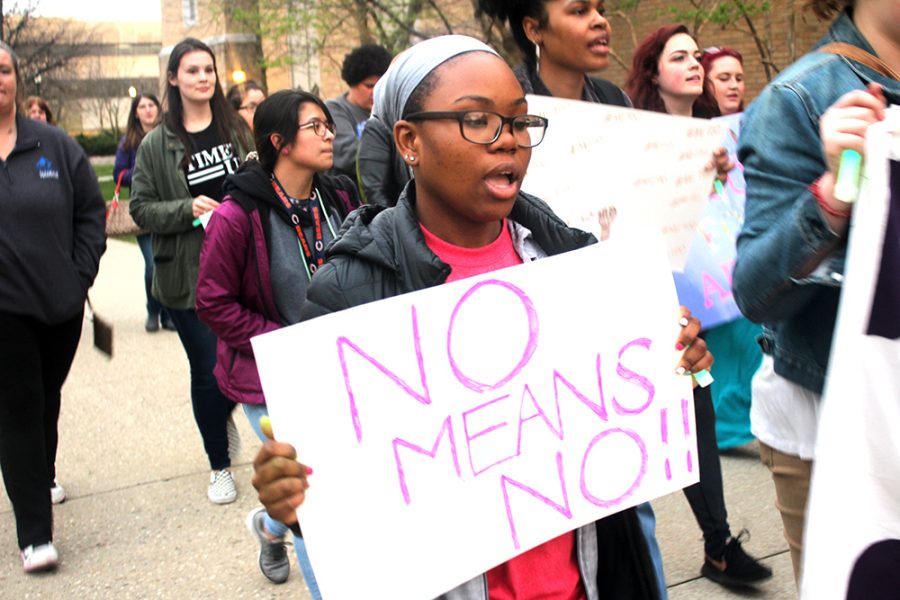 Imani Ryan, a sophomore family and consumer sciences major, holds up her “No Means No” poster during Take Back the Night on Tuesday evening.

Students gathered at the Doudna Steps to speak up against sexual violence at “Take Back the Night” on Tuesday evening.

Organized by Sexual Assault Counseling and Information Service and EIU FEM, students wrote their feelings and facts about sexual violence in chalk on the Doudna Steps and proceeded to march across campus.

They shouted a variety of chants as they held their posters high, such as “Hey, hey, ho, ho, sexual violence has got to go” and “Claim our bodies, claim our lives. Take a stand, take back the night.”

Alana Reinhardt, the president of EIU FEM, said members had just brought the march back after a two-year hiatus.

“I wanted to stand in solidarity with and stand up for those who are silenced because of their gender and sexual violence,” Reinhardt said.

Imani Ryan, a sophomore family and consumer science major, held up a “No means no” poster as she marched.

“It’s always important to stand up for those that can’t speak for themselves. Women’s rights are important, and although men get sexually assaulted too, the majority are women. We already don’t get a say a lot of the time, so going the extra mile is important,” Ryan said.

Cheyenne Jackson, a sophomore health administration major, said enough people came to the march to show that the issue is significant, especially on college campuses.

“I’m glad whoever found the time to come out, came out. This needs to be talked about,” Jackson said.

When the march concluded, participants had the option to sign their name on a pledge to “start by believing” when somebody tells them they were sexually assaulted.

Amanda Feder, a preventionist at SACIS, said one in four women will be sexually assaulted within their lifetime, and over 82 percent of the time, the victim knows their offender.

“We want to show survivors we support them and raise awareness of sexual violence in our community and to take back the night to make that a safe time to walk freely,” Feder said.

Chloe St. Pierre, a sophomore family and consumer sciences major who interns at SACIS said events like Take Back the Night are important so survivors of sexual violence know they have resources if they need them.

“A lot of people have to deal with it on their own,” St. Pierre said. “That’s upsetting and something has to be done.”

Stephanie Anderson, a volunteer coordinator at SACIS, said the first Take Back the Night march was held on a Florida campus with the motives of demanding resources and safety.

“We came out to raise awareness and show support to survivors. Our motives are really similar to those who marched first,” Anderson said.