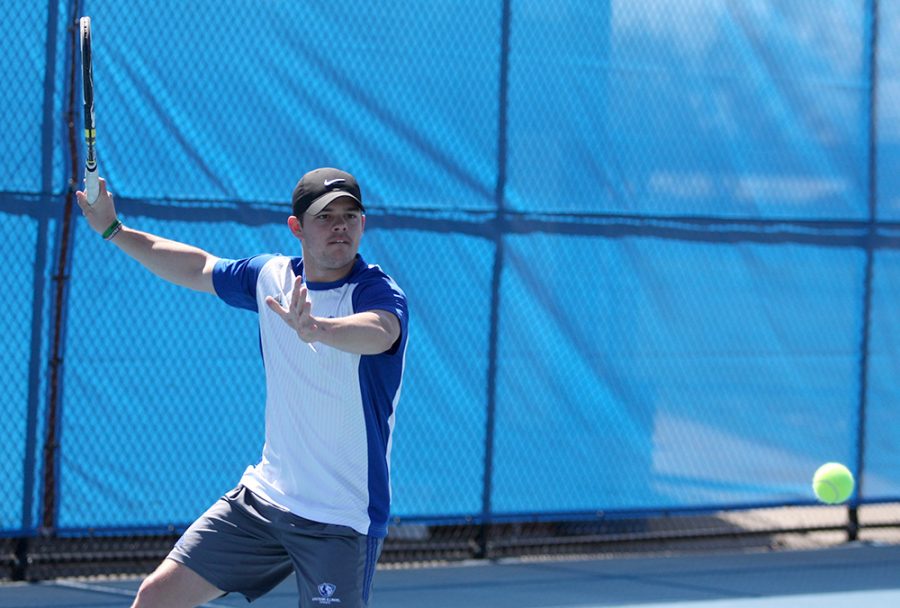 Senior Grant Reiman returns the ball on his forehand in Eastern’s match against Belmont March 30 at the Darling Courts. Despite a first-round OVC Tournament loss, Eastern improved overall and has the team excited for the future.

Consistency and improvement are just some things the Eastern men’s tennis team had this past spring season.

From making its first conference tournament since 2014 and improving their win total to their best mark in that same year, there was a lot to be excited about for the team.

Eastern coach Sam Kercheval said all season long that the Panthers needed to stay hungry, do what they know best and compete at the highest level.

For a while, Eastern was shuffling players to find the right combinations in doubles play.

“I think overall, it was a great year. It was the first time I had been a part of a team consisting of great players, all with the ability to beat me, and I hope to never take that for granted,” Charbonneau said. “It didn’t come without adversity, but that’s to be expected. I’m excited for the future and hope to have even more fun next year. I can’t thank the seniors and the other guys enough for helping me through a lot of things in the year.”

But that wasn’t only thing that changed for Eastern. Singles play also improved for some players.

O’Brien, being the main man at No. 1 singles, went 11-9, leading the Panthers in wins. O’Brien also won his first OVC player of the week honors in January, making him the first Panther to win the award since 2016. He was named to the All-OVC second team at the OVC banquet.

Kingsmith, Woodson and sophomore Braden Davis had four wins each, where both Kingsmith and Davis improved their win totals.

Heading into next season, Eastern will not have any seniors, as O’Brien, Kingsmith and Davis will all be juniors alongside Marko Stefan Janjusic, who sat out this season due to injury.

Kercheval was pleased with the team’s efforts and contributions this season and looks forward to next year.

“I think more important though, I really feel that we improved throughout the year and played our best tennis at the end,” he said. “It was a long, grueling season with a tough schedule, with injuries, but we played hard and competed well in the conference tournament, which was great to see.”

“To see the constant improvement and development in our individuals and our team was important,” Kercheval said.

He said the team needs to expect better results, and some core men are stepping into leadership roles already.

“They know what I expect as a coach, and it will be up to them to continue to raise the bar we have already set while teaching the new players the way we do it at EIU,” Kercheval said.

Another improvement this team saw was its win total on the road, raising it by two from a year ago. Also, the Panthers won their first conference match in nearly two years against Tennessee State.

Woodson, who will be graduating, just wants the team to know not to take anything for granted.

“I just wanted them to know (to) take advantage of every moment, because as much as it seems like an often grind, it really does go by fast,” he said. “These are special moments that not every athlete gets a chance to experience.”

The Panthers ended their season at the OVC tournament with a 4-0 loss to Jacksonville State, finishing with a 6-17 record and 1-5 in the OVC.