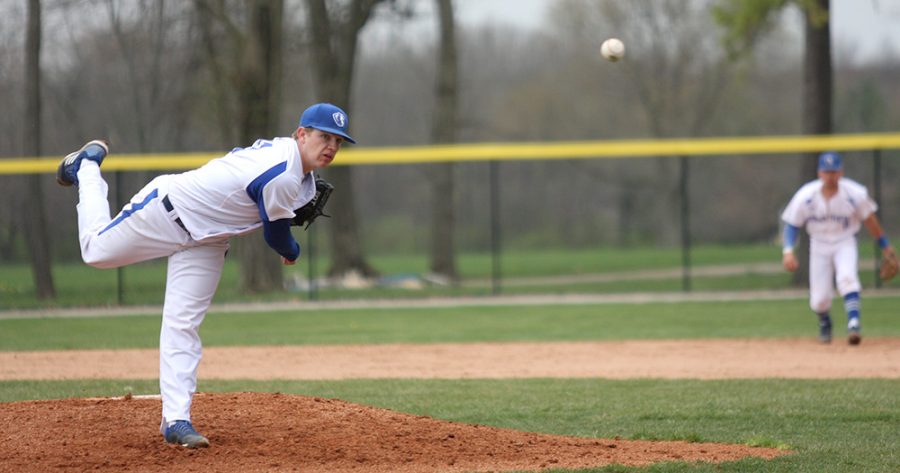 Not many baseball teams or fans want to witness the first two innings of a college baseball game take nearly an hour.

And luckily for Eastern fans, it was their team doing all the trotting around the bases as the Panthers batted around in the first en route to a game filled with long balls to give the Panthers a 14-11 victory over Saint Louis Tuesday evening.

“It feels like the type of baseball we should be playing,” Eastern coach Jason Anderson said. “I know we gave up 11 runs, but we’re really an offensive-based team.”

The Panthers came out swinging early and often with the usual big swingers, such as senior Dougie Parks starting out with a deep home run to left.

He was followed by some breakout at-bats such as senior Hunter Beetley, who blasted a ball over the center-field batter’s eye to keep the offense rolling.

That is a positive sign for Beetley as he had just three hits coming into the matchup but flipped the switch against Saint Louis with three RBI’s and a walk.

Junior Jimmy Huber had himself a day with not just one, but two home runs, and that was enough for five RBI’s, which gives him 24 on the season.

Saint Louis brought its offense as well though, in fact, to start this one it seemed clear the runs would come at ease.

The Billikens seemed to have an answer for every Panther run early on, and sophomore Jake Garella was a major reason for that.

“This is a midweek game, so you’re not starting your weekend guys,” Anderson said. “You’re mixing and matching a bit, so I think our guys did a good job of bending and not breaking.”

No matter what pitcher Eastern put on the mound, Garella had an answer for them going, 5-for-5 at the plate with two RBIs.

Senior Parker Sniatynski also got the job done at the plate for Saint Louis, getting a hit in each of his two at-bats with one of those coming on a three-run home run.

But, as the Panthers kept up their home run derby, Eastern just needed its bullpen to fend off a Billiken comeback.

Eastern right-handed junior Carson Haws played a key role in preventing that comeback as he allowed no runs in three innings pitched on the mound.

“He’s stepped up big the last two weeks,” Anderson said. “He always gets the job done, and he doesn’t fold.”

He also notched four strikeouts to the 16 batters faced.

Haberer did just that, despite allowing one run in two innings as he sealed the save.

“Once again bend but didn’t break, and that was just kind of the theme of the day,” Anderson said.

The win ends a three-game skid for the Panthers, and also gives them their second straight win at home.

Eastern will get a chance to extend that home streak with a quick turnaround Wednesday as Robert Morris comes to town for another midweek affair.

That will be the last dip out of conference play before the Panthers play six straight OVC games, starting with a three-game set Friday at Coaches Stadium against Morehead State.