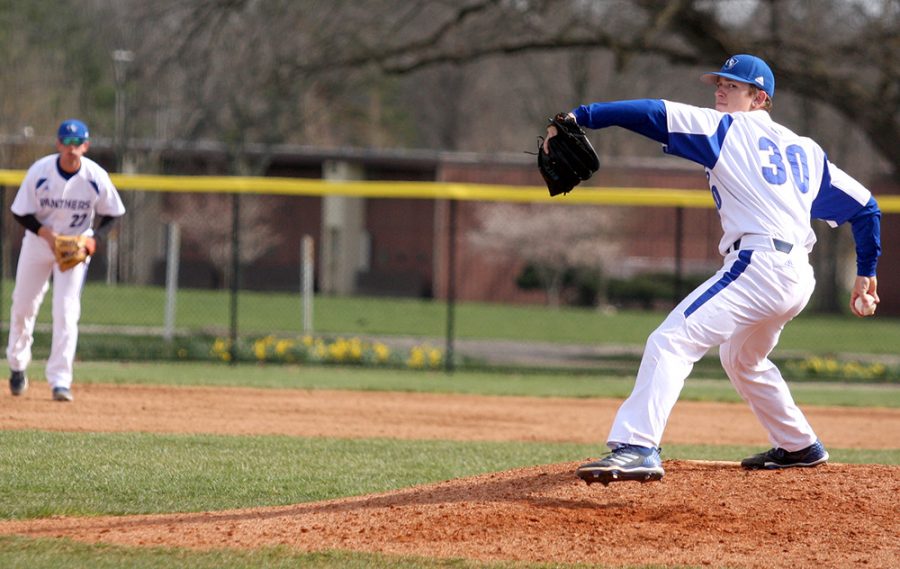 Freshman Blake Malatestinic kicks back to throw a pitch in Eastern’s loss to Butler April 17 at Coaches Stadium. The Panthers have lost five out of their last six games.

The Eastern baseball team is on a three-game losing streak and struggling offensively, but the pitching staff of this team has seen some vast improvement from a year ago.

In past years, the Panthers either struggled to hold leads or stay in ballgames because the depth was not there for the pitching staff.

There are improvements needed all around if the wins are going to come at a higher rate, but it is worth noting how far this staff has come.

Just look at the overall ERA between last year’s dead-last OVC rank of 8.15 to sitting in sixth this season with a 6.09 average.

The biggest part of this improvement has come from the bullpen.

One of the most important roles on a staff comes at the closer position, and it is safe to say senior Michael Starcevich has filled that one well.

His latest performance comes in the 5-4 Sunday loss to Eastern Kentucky, but he served as well as he could with 4.1 innings on the mound and allowed no runs on one hit.

That is the type of clutch performance needed if the Panthers’ rebuild is going to keep trending upward.

Eastern has found itself in more close games to start this season as well.

In fact, nearly half of the team’s 25 losses have come by four runs or less, and that is a manageable deficit to erase within just one or two innings.

Right-handed junior Tyler Jones has also been a force on the Panthers’ staff this season, and his efforts rank among the conference’s best.

Jones’ 3.29 ERA places him fourth in the OVC, and that comes after pitching the eighth most innings in the conference.

What is different about Eastern’s pitching staff is how it gets those outs, though.

The Panthers have found this improvement despite ranking third to last in the OVC in strikeouts with 294 on the year.

To put that into perspective, Morehead State leads the league with 391 strikeouts, but has not been that much better in terms team pitching as they are two spots ahead of Eastern.

As far as year-to-year comparison goes, the Panthers are about 100 strikeouts away from last year’s total with 20 games still left this season, so it is reasonable to think they will improve in that category as well.

That is what it is going to be about for this team; game-to-game improvement.

The runs will come and the hitting slumps will end eventually, but it is at least a sign of optimism to see a team improve in such an important area like pitching.

The Panthers try to get both areas going with their next game Tuesday at home against Saint Louis.