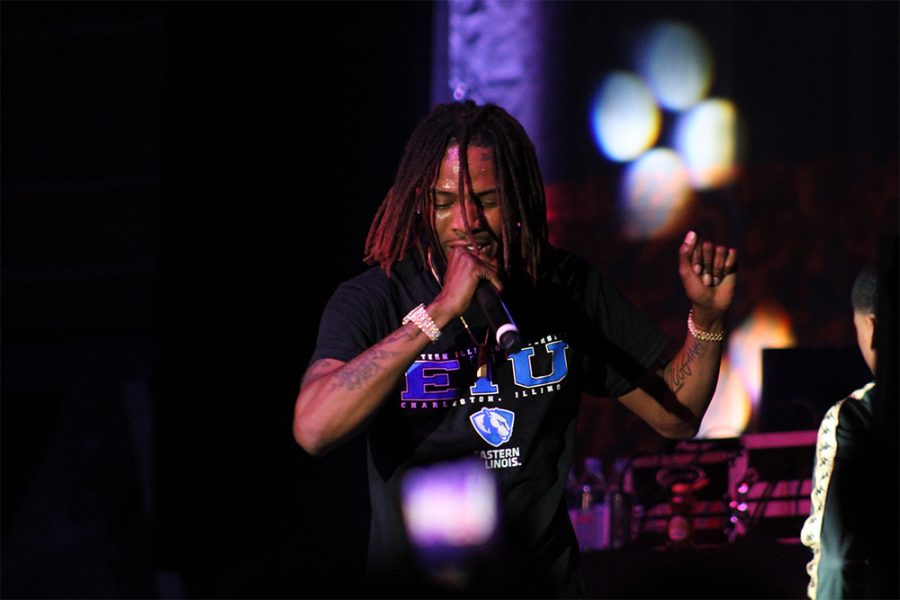 Performer Fetty Wap dances onstage during his concert on Sunday night in the Lantz Arena.

Fetty Wap graced the stage in a bright yellow Gucci sweater and took it off to reveal an Eastern T-shirt as audience members screamed in anticipation for his performance Saturday in Lantz Arena.

Fuzzi Fuzz came out first and performed to hype up attendees for Fetty Wap. He also wore Eastern attire and ended the night singing songs with the audience after Fetty Wap left the stage.

JB Official and Ashton Wilson, a kinesiology and sports studies major, took the stage as their music group Versatility and played songs from their two albums.

“The title of my album is just to show my appreciation to my main followers that listen to my snippets and stuff like that,” Fetty Wap said. “Basically the fans kind of chose those songs.”

Fetty Wap said his new album, “Bruce Wayne,” will be coming out in June 2018.

Fetty Wap also told the audience it was his mother’s 51st birthday and they were Facetiming during the concert. He said she wanted him to be there for his fans.

Hanna Cresci, a graduate student, and her sister Olivia Cresci, a student from Illinois State University, wore Fetty Wap shirts to show how big of fans they were.

Olivia Cresci said she has been listening to his music since she was a freshman in high school and thought it was cool to see him perform all his songs she had heard on the radio and Spotify.

Essence Dildy, a sophomore kinesiology and sports studies major, and Dominque Dickerson, a sophomore sociology major, said they have been fans of Fetty Wap “since the beginning of time.”

When they found out he was going to be the featured artist for the spring concert, they bought their tickets right away.

Dildy said when Fetty Wap touched her hand she screamed at the top of her lungs.

Dickerson said her favorite part of the concert was when Fetty Wap touched her hand as well.
“I think I’m gonna marry him,” Dickerson said.