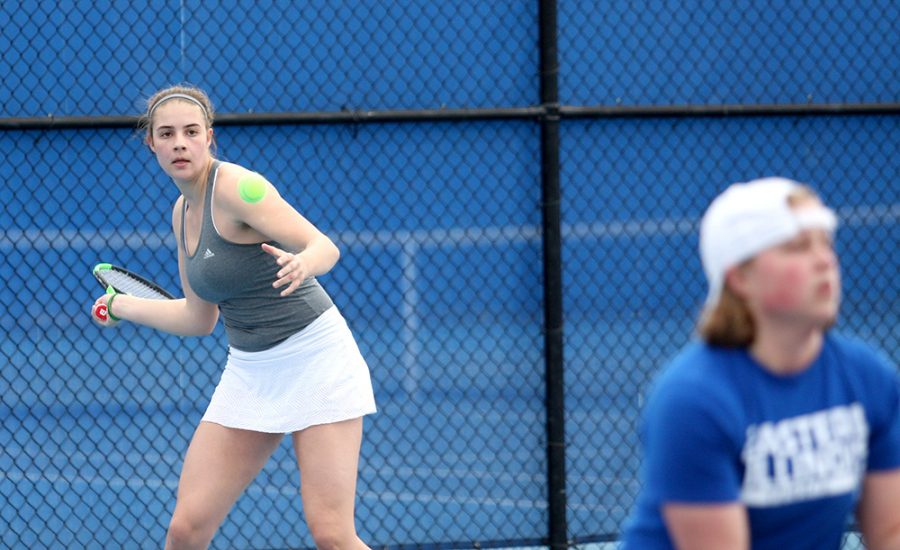 Sophomore Stella Cliffe returns the ball in her doubles match with partner Grace Summers against Belmont March 30 at the Darling Courts. The Panthers open the OVC Tournament this weekend.

After barely winning the first set 7-6, she was able to secure the win for Eastern with a 6-3 second-set win.

Interim director of tennis Sam Kercheval said the win was important, and it turned out to be. It was the conference opener for Eastern, and the win helped them get the five seed in the Ohio Valley Conference tournament.

On Friday, Eastern will face No. 4 Gamecocks for the second time at 5 p.m. in the first round of the OVC tournament.

“I remember last time we had really long points,” Martin said about the first meeting. “So, I’m prepared for a long match.”

There will be some differences from the first meeting between the two.

For one, sophomore Stella Cliffe, who has been solid this season at No. 1 in the lineup, had an off day on March 16 and lost in straight sets in her singles match.

“The first time we played Jacksonville State, it wasn’t Stella’s best outing,” Kercheval said. “She was in both sets but just never got over the hump which is hard to do when not feeling the ball great.”

The other difference is another freshman, Rachel Papavasilopoulos, will be in the lineup Friday. She missed the first meeting between the teams with an injury.

“The addition of Rachel back in the lineup means that we likely will have new matchups at every spot in the singles lineup,” Kercheval said.

Even though Papavasilopoulos was not able to compete against Jacksonville State the first time, she said by watching the match she got a really good sense of the way the Gamecocks competed.

“I think that as a team we all know the kind of energy we need to bring tomorrow in order to beat them,” she said.

Martin believes the change in the Panthers’ lineup helps give Eastern a “strong shot” to win.

“I’m not going to over think it too much because playing outside makes the conditions different,” Martin said.

Along with being prepared for a long match, Martin said, “(I) also remember that she liked to pull me really wide and I had to use the lob, so I’m going to try to use that as well.”

Papavasilopoulos said she is looking forward to playing a good match and getting to fight hard.

“Since I just got back, I’m going to really try to just enjoy playing and appreciate the fact that I was able to recover from my injury in time to play,” she said.

Because the matchups are different, Kercheval said the team cannot have the assumption that it will win again.

“If we play the way we are capable and keep our minds in a good spot, we can get another win,” he said.