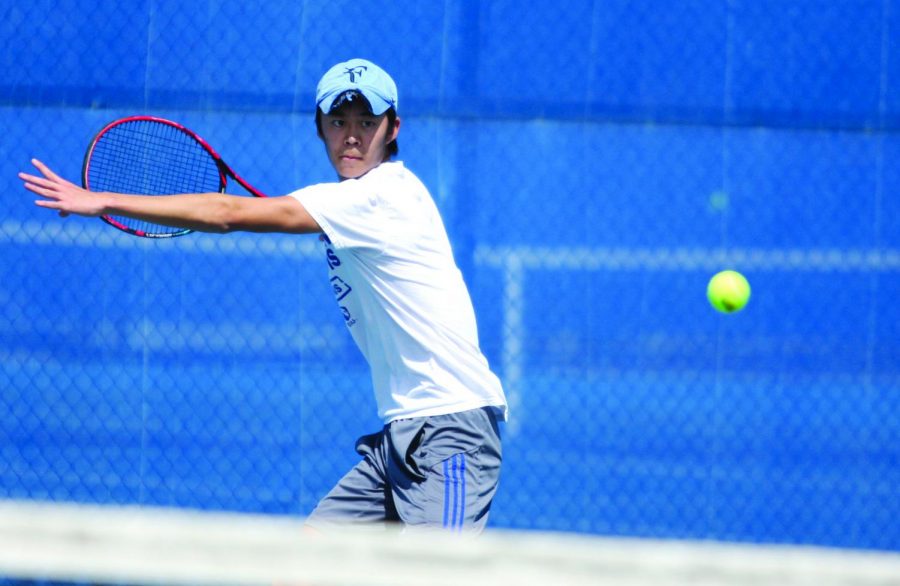 Freshman Kaisei Kuroki looks to hit a forehand over the net in his singles match March 30 at the Darling Courts against Belmont. Eastern starts the OVC Tournament Friday.

The Eastern men’s tennis team is off to the Ohio Valley Conference tournament Friday at the Centennial Sportsplex in Nashville.

The tournament goes until April 22 and the Panthers’ first match is against Jacksonville State.

Eastern finished with a record of 6-16 and 1-5 in the OVC in the regular season.

For seniors Jared Woodson and brothers Grant and Trent Reiman, the time has come to compete in their first tournament.

No. 6 Panthers will go against No. 3 Jacksonville State, who beat Eastern once this year to open conference play.

In that match, the Panthers earned a win 6-2 at the No. 2 doubles spot with Woodson, and sophomore Gage Kingsmith.

Woodson, in what could be his final match of his Eastern career, said that fact has not sunk in yet.

“It’s all still surreal,” Woodson said. “Just looking forward to the match and giving my all.”

While Eastern did not earn a point in singles action against the Gamecocks, that quickly turned around the last couple of matches.

In the last three matches, Eastern has combined to win eight singles matches, with some players winning more than one match.

The team has been looking to be on the same page, and they improved their win total from the previous couple seasons.

Also, if Eastern defeats the Gamecocks, they will not have to face Belmont, who locked up the first seed; instead it will be No. 2 Tennessee Tech.

The other match that will be going on is Eastern Kentucky and Austin Peay, which starts at 11 a.m., and the winner of this match will go on to face the Bruins.

Freshman Logan Charbonneau is ready to make the OVC tournament a priority.

“I’m mad excited and hope to make this a standard for years to come,” he said. “I want to get the experience of just how it feels so I’ll be ready for it again in the future.”

Coach Sam Kercheval said going to the tournament is more of the same excitement, but having one big group is awesome.

“I’ve been fortunate enough to have come with the girls the last few years, so I feel I know what to expect from a schedule and atmosphere standpoint,” Kercheval said. “But it is exciting to be down here with both teams at once. We talked about that before our practice when we arrived today, that getting to be here as a big group is not something that has occurred often.”

Kercheval also said no matter what the circumstances are, the team will be ready.

“At this point, there isn’t anything else to say other than to go compete and leave everything out on the court,” Kercheval said. “We want to have put everything on the line so that whenever the season ends whether tomorrow, Saturday, Sunday or beyond, we will have no regrets.”

If the Panthers advance in the championship round, that would take place on Sunday at 10 a.m.