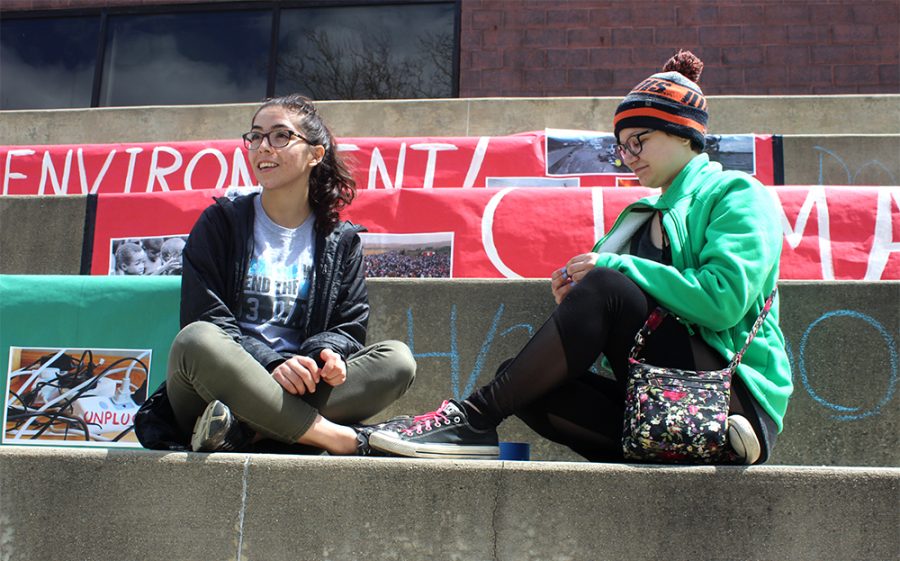 Olivia Swenson-Hultz | The Daily Eastern News Stephanie Esparza, a sophomore kinesiology major and Nellie Schalasky, a senior management major sit on the Dounda steps that have been decorated for “I am Climate Change.”

Though their posters kept blowing everywhere because of the wind, Earth Wise and Students for Peace and Justice still decorated the Doudna Steps and passed out pamphlets to spread awareness about the atrocities of climate change Thursday afternoon.

Participants painted posters and displayed them on the Doudna Steps, with messages such as “Climate Change Causes Hunger,” “Climate Change Destroys the Environment” and “Make Polluters Pay.”

A pamphlet was distributed advising people to be energy-efficient by trying tactics such as changing light bulbs to compact fluorescents or LEDS, eating wisely by buying organic and locally-grown foods, trimming waste by shopping smarter, composting foods, recycling and asking representatives to implement a carbon tax.

Doris Nordin, the adviser of Students for Peace and Justice, helped pass out the pamphlets to people, asking them if they believe in climate change and if they think it can be stopped.

Nordin said the consequences of climate change include destruction to the environment, death to animals and hunger as a result of the damage caused by the melting of ice that creates flooding.

“We aren’t going to stop it altogether, but we can help to alleviate climate change. If we can’t stop it, we can slow it,” Nordin said.

Owura Kuffuor, the president of Students for Peace and Justice, said people may feel there is little that can be done, but a little bit of action can help to stop climate change.

Cynthia Kmety, the vice president of Earth Wise who also helped to distribute pamphlets, said people need to be more aware of the fact that climate change is a major issue.

“Biodiversity and our environment as a whole is changing, so people need to make changes, too,” Kmety said.

Nellie Schalasky, a senior management major, said it is important for people to be more conscious of the environment, inside and outside.

“Climate change affects everyone, not just in the U.S. but everywhere,” Schalasky said.