Eastern batters explode for 17 runs in win over Illinois State 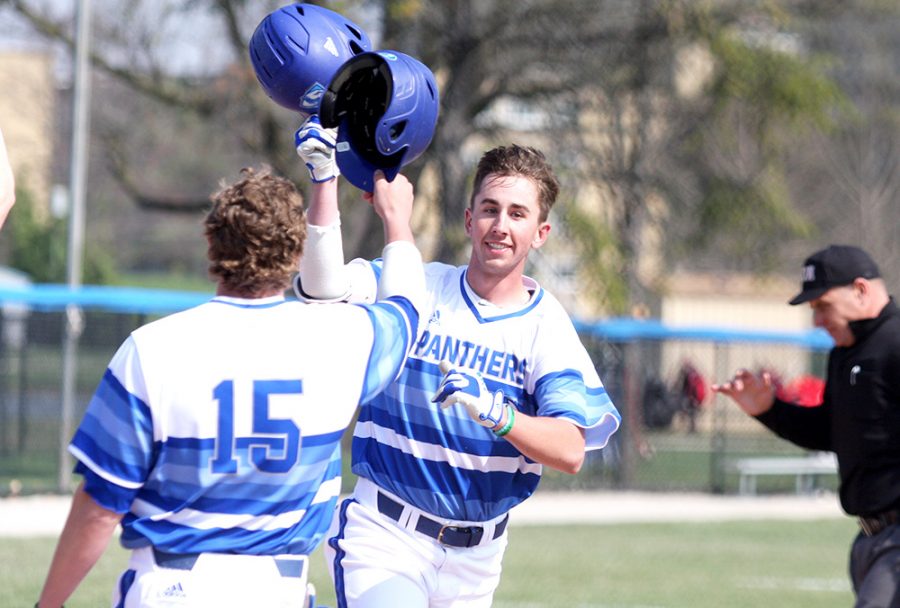 Eastern and Illinois State have had a school rivalry for over 100 years. On the baseball field Wednesday, they squared off in a game that will never be forgotten.

After a nine-run first inning and a barrage of home runs, the Panthers had an offensive explosion as they defeated the Redbirds 17-13. As a team, the Panthers had six batters with least one RBI and had a total of 18 hits, despite leaving seven on base.

“It was awesome,” redshirt junior first baseman Hunter Morris said. “That’s the kind of breakout game we’ve been looking for, and it felt even better to do it against someone like ISU.”

The Panthers were ready to pounce on the ball, starting the game off with a leadoff home run over the centerfield wall from junior right fielder Jimmy Huber. Eight batters and six runs later, Huber returned to the plate to hit his second solo home run of the inning.

For the rest of the game, the Redbirds were slowly crawling their way back, scoring runs in six different innings. Once sophomore centerfielder John Rave scored three runs in the top of the eighth inning, the comeback seemed possible as they only trailed the Panthers 14-12.

With a need for some insurance runs, it did not take long for the Panthers to score three more runs of their own. The Redbirds’ sophomore pitcher Jack Bellinger started the inning by walking back-to-back Panther batters: junior second baseman Jimmy Govern and senior designated hitter Matt Albert.

Bellinger was immediately pulled after those walks, bringing the redshirt junior pitcher Rhett Rapshus in to face Morris. In need of a few more runs, Morris unloaded a three-run home run over the left field wall, putting them ahead 17-12.

“I knew right when I hit it that I got it pretty good,” Morris said. “I wasn’t exactly sure if it was going to get out, but I knew I was going for extra bases.”

So far this season, 17 runs has been the highest total for the Panthers, as well as their 18 hits. Morris did more than put away the game for the Panthers with his three-run homer, ending his day going 4-5 with six RBI’s and scoring three times.

In the top of the ninth with already a run scored, Illinois State was looking to send the game into extra innings. However, senior closer Michael Starcevich struck out three Redbirds, helping the team out of a bases loaded situation.

The Redbirds had eight batters tally a hit and seven players had an RBI or more. As for their pitching, six pitchers were used in the game, only striking out seven batters and allowing the Panthers to send six home runs over the wall.

The Panthers will have Thursday off before traveling to Eastern Kentucky on Friday for an OVC three-game series. Despite Eastern Kentucky having a better record at 18-20, the team’s win against Illinois State has boosted their confidence.

“Hopefully this game will get the ball rolling for us,” Morris said. “We’re looking to carry this momentum into the next weekend at Eastern Kentucky.”

The first game of the series starts at 6 p.m.