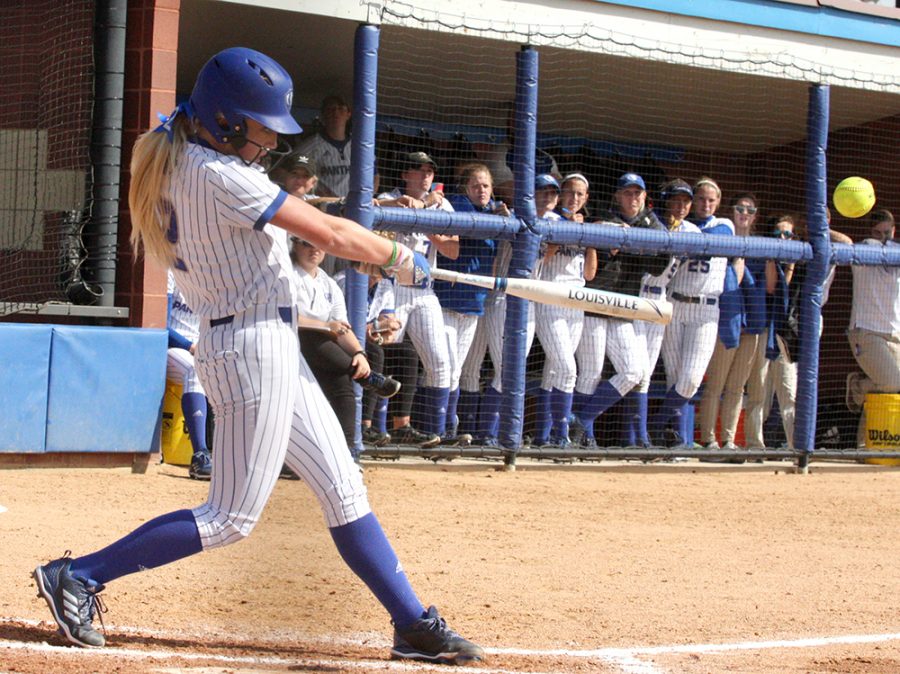 Freshman Megan Burton connects with the ball in the Panthers’ win over Southeast Missouri April 11. Eastern lost both games to Southern Illinois-Edwardsville Tuesday on the road.

In game one of the Eastern softball team’s doubleheader against Southern Illinois-Edwardsville, the Panthers took a three-run lead into the seventh just to see it slip away and lose 5-4 on a walk-off single by Kalei Kaneshiro.

Fast-forward seven innings into game two, and a different story, same outcome. Eastern scored two runs in the top of the seventh to tie it at four, just to have Southern Illinois-Edwardsville win on a passed ball.

Eastern extended its lead in the seventh inning off freshman Morgan Lamore’s single to score junior Mady Poulter. Lamore drove in two runs in the loss.

The Panthers were rolling in game one as senior pitcher Jessica Wireman had given up just four hits and struck out nine.

But as soon as the seventh inning came, the wheels fall off the wagon. The Cougars quickly put two runners on off a leadoff single and a walk. Wireman struck out the next batter, but allowed a two-run double right after, then an RBI single, bringing in senior Michelle Rogers to pitch.

Rogers got one out, but then hit a batter, then Kaneshiro came through and drove in the winning run.

“We controlled the first game for six innings and played pretty well,” coach Kim Schuette said. “Unfortunately, the game is not six innings.”

Eastern has not lost much this year, losing just their 10th and 11th games and third in conference, but the three conference losses have come late in the game.

Both of Tuesday’s losses ended in the last inning, but the Panthers’ loss to Tennessee-Martin over the weekend featured a blown three-run lead in the fourth.

Eastern led 3-0 in that game, but the Skyhawks scored four straight runs, with the last coming in the sixth to beat the Panthers and hand them their first OVC loss of the season.

Offensively, sophomore Haley Mitchell continued her stellar season going 3-3 at the plate with a home run and a walk. And the freshman duo of Lamore and Megan Burton drove in the other three runs.

Eastern, for a moment, put the walk off in the first game behind it as it came out and scored in the top of the first inning as Poulter drove in junior Kayla Bear, who singled right before.

Southern Illinois-Edwardsville pitcher Corrina Rivas retired the next three Panther hitters, setting up the Cougars to score in the bottom half and tie it at one.

After giving up the walk off single in game one (run was charged to Wireman, as well as the loss), Rogers got the start in game two.

Rogers gave up one run in the first inning, but pitched three scoreless, where the Cougars crossed the plate twice in the fifth, once in the sixth and the game- winner in the seventh.

Mitchell and junior Maria DeVito evened up the score in the seventh inning off a single and a fielder’s choice.

“Game two we hit some balls hard, but right at their defense,” Schuette said. “Unfortunately we were chasing them game two. We fought our way back to tie it, but overall, we didn’t play well enough to win.”

She said mistakes, base running, pitching, catching the ball and judging the ball hurt them and led to the Cougars’ runs.

In five of Eastern’s seven OVC wins this season, four runs would have been enough for Eastern to win the game as Wireman and Rogers have been limiting opposing offenses to two runs per game.