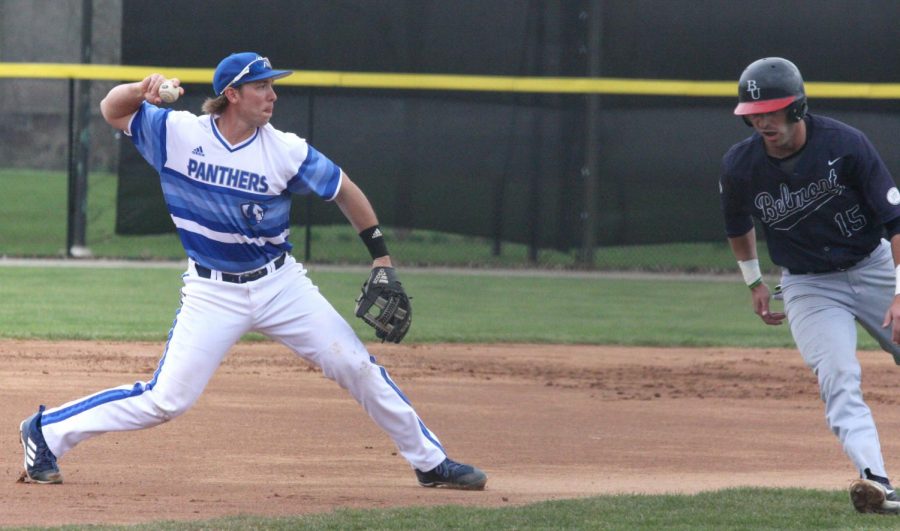 The Eastern baseball team may be on the verge of turning the corner in its season and now gets the chance to do so at home.

The Panthers picked up their first Ohio Valley Conference series win of the season after taking two of three from Belmont over the weekend.

Now an even bigger test arises with a 23-win Butler team coming to town Tuesday.

Sophomore catcher Ryan Knernschield has taken matters into his own hands as of late, and it could not come at a more opportune time considering the Panthers’ offense had run into a wall a few weeks ago.

Knernschield is now boasting an 11-game hitting streak though and Eastern has showed some life offensively as its pitching staff has continued to keep the team close in ballgames.

The sophomore’s hitting streak has been impressive as he is hitting it in every direction, batting .344 with 24 total bases, seven RBIs and a few doubles in there as well.

While guys like Knernschield set the table, it has been others like redshirt junior Hunter Morris who are bringing home the runs.

Morris leads the team in RBIs with 29 so far on the season, and then the other big bat in the lineup has come from senior Dougie Parks.

Parks has had the home run swing going since he got here as a transfer last season, and it has been more of the same in round two as he leads Eastern with eight long shots.

The senior ranks in the top 10 of the OVC in four of the major offensive statistics.

While those three have anchored the Eastern offense, the Panther pitching staff has really improved from a year ago.

Senior Michael Starcevich has tossed some shutdown-type stuff on the mound, and that has led him to racking up six saves as the Panthers’ closer, ranking him second among the conference and fourth on the all-time Eastern list with 11 in his career.

Starcevich has been just one of many clutch performers out of Eastern’s bullpen this season as guys like senior Jake Haberer have provided some important innings on the mound.

It is also evident in the stat book as the Panthers ranked last in the OVC in team pitching a year ago, but are now in the upper half of the conference ranks.

That is going to be the difference maker against a Butler squad that is led by Garrett Christman, who has a .360 batting average and 64 total bases on the season.

And freshman Blake Malatestinic is dealt the task of containing that as he takes the ball for Eastern on the mound, trying to bounce back from his outing against Southern Illinois-Carbondale where he allowed five runs in 5.1 innings pitched.

The action gets started with first pitch at 3 p.m. at Coaches Stadium, followed by another game Wednesday evening against Illinois State.