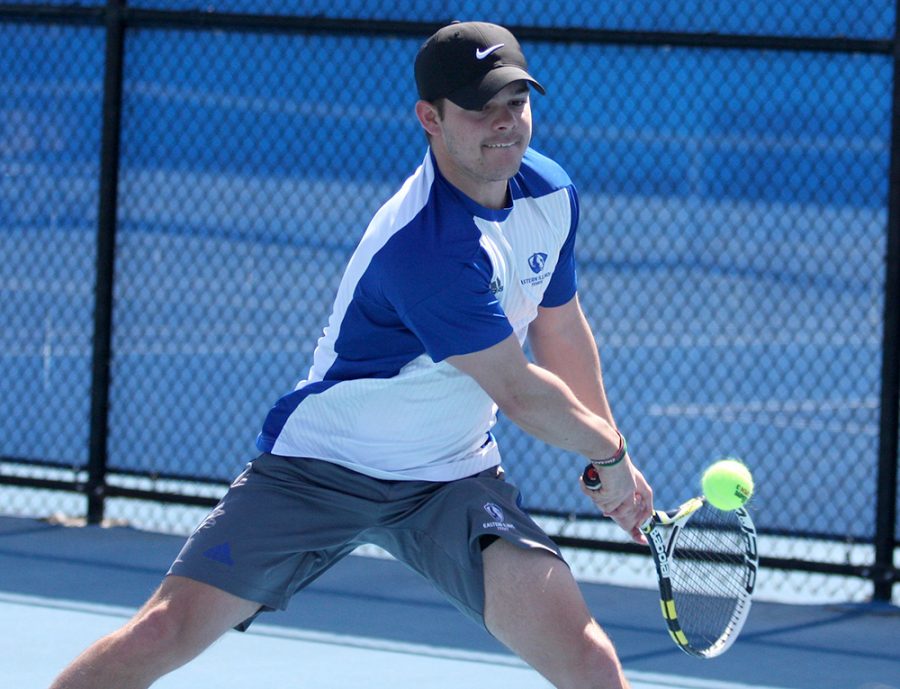 Senior Grant Reiman returns a backhand in his match against Belmont March 30 at the Darling Courts. Eastern won its Senior Day match against Marian Saturday.

Eastern Coach Sam Kercheval’s birthday was last Thursday, and seniors Grant and Trent Reiman said it would be great to get Kercheval a win.

The Panthers got one, with a 4-3 win over Marian Saturday in its final regular season match.

Eastern fell one win short from tying its most win total since 2013 and 2014, where the Panthers had seven.

For seniors Jared Woodson and Trent Reiman, they clinched the match in the final singles positions where Trent won at No. 5 singles 6-4 and 6-1. Then Woodson sealed the win at No. 6 singles with his win (6-4, 6-1).

The win for Woodson gave him his fourth of the spring, and Trent Reiman his third.

Getting this win for was special for Woodson.

“It means a lot to me,” Woodson said. “It’s something I’ve always wanted to do. I always wondered how it felt to do that and the fact I was able to pull it out for the team means a lot, especially being Senior Day.”

And now with conference play coming up this week, Woodson just wants to prepare for the tournament.

“For conference, I just expect us to have a good week of practice to prepare us for a tough weekend,” he said. “But knowing we still have a chance to compete well is awesome.”

Rounding out the matches for Eastern at No. 1 doubles, sophomore Gage Kingsmith and Woodson lost 7-5, sophomore Freddie O’Brien and Trent Reiman clinched the No. 2 doubles 6-4 over and Grant Reiman and freshman Logan Charbonneau followed suit in a 6-4 win at No. 3 doubles.

For Kercheval, this was a big match for the Panthers to take.

“It meant a lot to win yesterday because it was a struggle, and when we needed to come back from being down 3-2, Trent and Jared stepped up and won their respective matches,” Kercheval said. “Nice to see the seniors come through on Senior Day.”

With the conference tournament coming up this weekend, Kercheval said team members have to trust what they do.
“Preparing for the conference tournament, the next couple days will be about just getting a lot of reps, getting guys feeling good with their strokes and everything,” Kercheval said. “Making sure we go into matches feeling we hit a ton of balls and have no doubt in our abilities.”