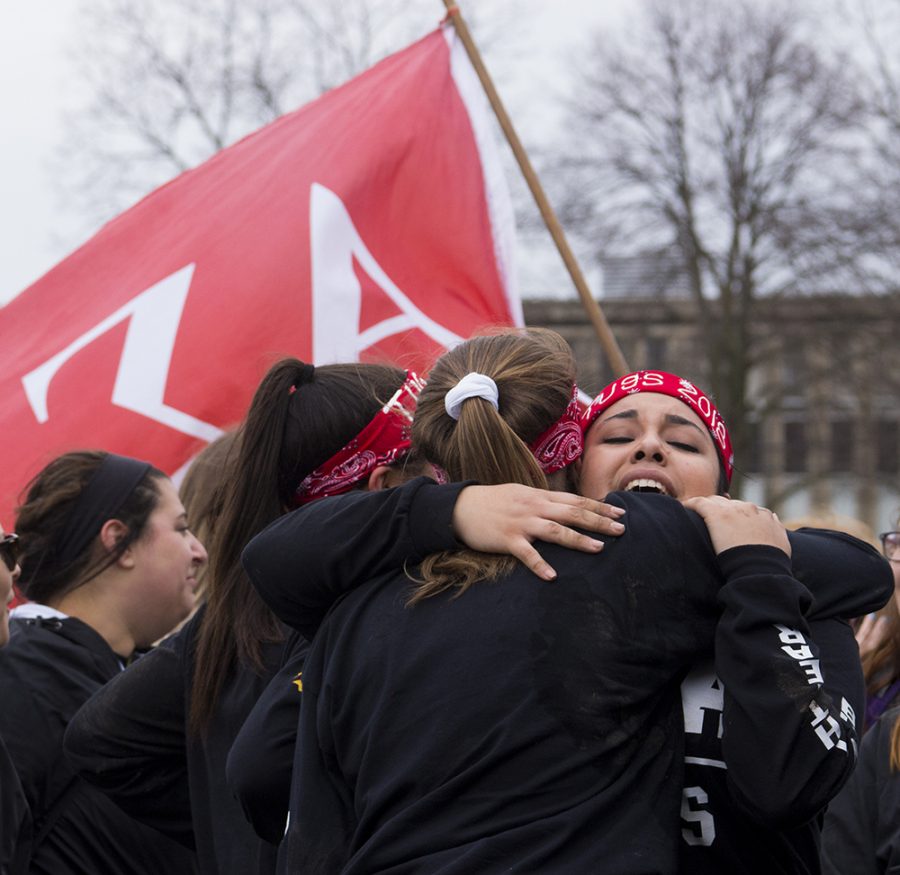 Selena Alonso hugs her sorority sisters as they celebrate Alpha Sigma Alpha’s victory in the Tugs championship on Saturday, April 14. Alpha Sigma Alpha won against Kappa Delta with a time of one minute and 52 seconds.

For the third year in a row, Alpha Sigma Alpha celebrated another women’s Tugs championship Saturday at the Campus Pond.

Selena Alonso, a senior elementary education major and member of the Alpha Sigma Alpha Tugs team, said the excitement she felt was unreal.

“I’m feeling so much excitement. We won three years in a row, so much hard work was put into it and it just feels amazing to win,” Alonso said.

As a senior, Alonso said through all the excitement, the moment was also bittersweet.

“It’s my last Tugs,” she said, smiling and cheering with her teammates before running off to take photos.

Katie Jones, the captain of the Alpha Sigma Alpha Tugs team, held the first-place trophy in her hands as she smiled and described the “incredible feeling” she had.

Jones said the team put in many hours of practice and hard work to reclaim their first-place title and thanked her team for giving their all.

“We have such a great team,” Jones said.

On the opposite side of the pond, Dylan Seitz, the leader of the Tugs rope for Sigma Nu, fell to the ground on his back, the soggy rope dropping around him.  He grabbed his face and pushed his arms up into the air after his team won the men’s Tugs championship.

Sigma Nu competed against Delta Chi. These were the only two fraternities who participated in Tugs during Greek Week.

Claire Litzenburg, a junior elementary education major and a member of Kappa Delta, stood with her friend and sorority sister Bridget Gordon, a junior family and consumer sciences major, before the Tugs competition started.

Litzenburg said Greek Week shows just how “Greek unity” forms because of the interaction between all the organizations.

In the morning, sororities competed against each other during the Pyramids competition before the annual Tugs competition kicked off at noon at the Campus Pond.

Sigma Nu won their Pyramids division by default since there was no other fraternity that competed.

Singing their sorority “serenading song,” the women from Alpha Phi formed a huddle after the Pyramids competition to celebrate their victory.

Team captain Alison Baker said they sing that song after any event or performance the sorority competes in.

“It’s just a way to show our appreciation for the ones who competed,” Baker said.

Baker said her team had been practicing since March for the Pyramids competition.

Greek Week is a chance for all the sororities and fraternities to not only compete against each other, but also support each other, she said.

The last time Alpha Phi won Pyramids was three years ago. Baker said she was on the team that won then, as well.

Sigma Kappa placed in second for Pyramids and Delta Zeta placed in third.