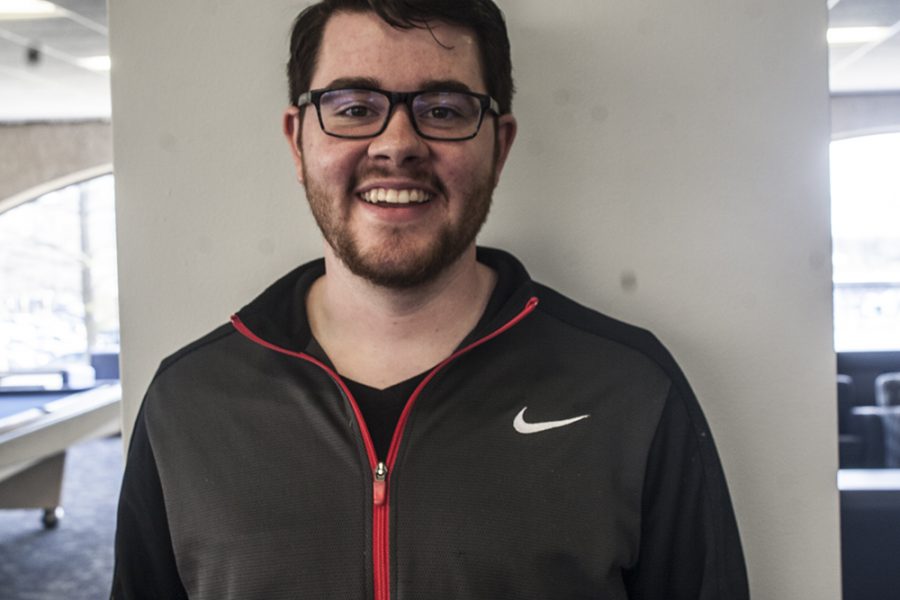 Frank Monier, a senior theater arts and business management major, is the only student in his department this year to direct a production for his honor’s thesis.

Frank Monier, a senior theater arts and business management major, was the only student at Eastern this year to direct his own production for an honor’s thesis, which was shown in mid-February.

Monier chose to do a play for his honor’s thesis because he was unable to fit a directing class into his schedule this semester, and he wanted to gain directing experience before he graduated.

“I went to the (theater arts) department and told them this is my game plan and I asked if I had (financial) backing, in which they told me I did,” Monier said.

“I then had to pick a play, and I had found this play during my freshman year, but I was debating between ‘Gruesome Playground Injuries’ and another play I really liked,” he said.

Monier ended up choosing “Gruesome Playground Injuries,” a two-person show that consists of a guy and girl who both deal with the issues of self-harm and self-abuse.

“I chose this one because it was easier and I knew that I would not have a lot of time to rehearse,” he said.

The two people in the show are both battling self-harm, and they are the only ones who can help each other, Monier said.

“It is supposed to be a love story, but honestly, it is one of those situations where they are almost worse for each other because the only time they ever interact is whenever they have just committed self-harm or self-abuse,” he said.

Monier said his favorite part of theater is performing in shows.

“I am just a very quirky person and love being able to get on stage and perform for others,” Monier said. “It sounds really cliché, but if you can do a show that has a relatable topic to your audience, even if it only catches the attention of one audience member, I really feel like it is successful.”

After graduating, Monier will go to the town of Princeton in June to perform four shows with Festival 56, a theater company.

“After Princeton, I am kind of in limbo,” Monier said.

“I hope to go perform with a company in Michigan or Chicago in the fall, but I am waiting to hear about other job offers.”

Monier came to Eastern already with the intention of majoring in both theater arts and business management.

“My parents really wanted me to major in business management and minor in theater arts,” Monier said.

“I decided just to compromise and double-major to please them.”

For his last three years at Eastern, Monier has served as a resident assistant. He currently works in Stevenson Hall.

“When I became an RA, it really forced me to time-manage and I learned that I had to pick and choose as to what things I had time to do,” Monier said. “It really shaped me to realize what my priorities are and it made me responsible for myself and others.”

Monier said coming from a town that is smaller than Charleston, Eastern showed him there is more to the world than what he realized.

“When you get to Eastern, it is like you know everyone, but in a broader perspective,” Monier said. “I was very naïve when I arrived at Eastern, and did not think that there were bad things in the world. Eastern showed me that there are things out there that are not always good, but you know how to deal with them.”