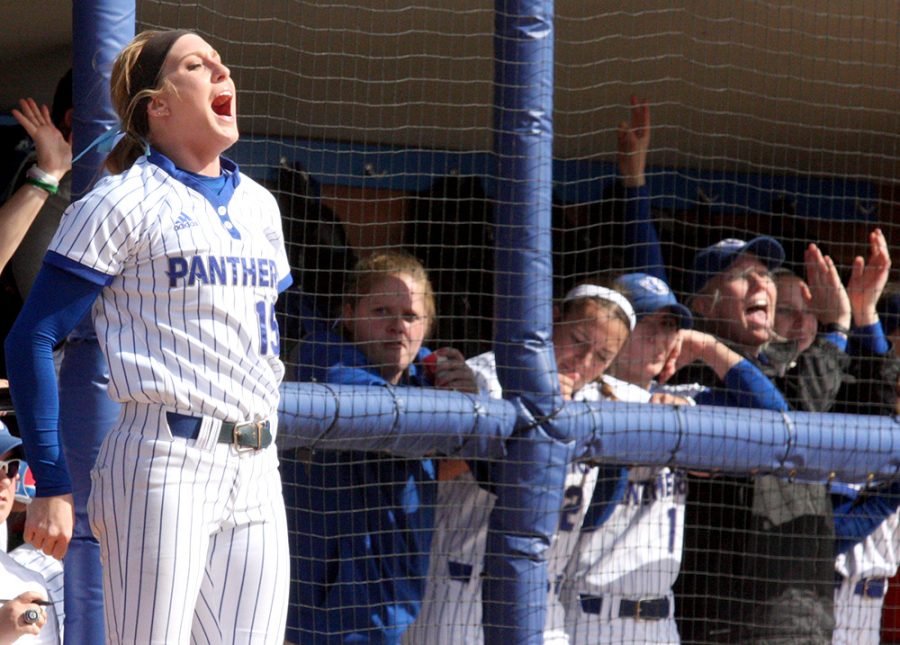 Senior Jessica Wireman celebrates Haley Mitchell’s home run in game one of the doubleheader against Southeast Missouri Wednesday at Williams Field. Wireman struckout 12 batters and gave up one earned run in the Panthers’ win.

Senior Jessica Wireman has been without question Eastern’s number one option pitching all season long. On Wednesday at Williams Field, she was handed the ball in game one of a doubleheader against Southeast Missouri and once again showed why she is one of the top aces in the OVC.

Wireman threw a complete seven innings and gave up one run while striking out 12 batters in a 4-1 Eastern win. And as good as that stat line is, Wireman probably pitched even better than what the box score shows.

Most of the blemishes in her game, including the one run she allowed, came in the first inning of the game. Southeast Missouri second baseman Parker Bandy started the game with a single between first and second base. With a runner on base, Eastern first baseman Haley Mitchell creeped in to protect against a bunt and the next batter hit a rocket groundball right past her, and suddenly, there were two runners on base, both on groundball hits.

Bandy advanced to third and the next batter, shortstop Sarah Messex, drove her in on a sacrifice fly. Right fielder Mia Davis nearly threw out Bandy on the play, but the ball arrived just late.

Wireman got the next batter to pop out to third baseman Maria Devito. Wireman gave up the first of two walks she gave up in the game on the next batter on a close call on the inside corner that caused Wireman to jump up and down on the mound in disagreement.

The inning ended on the next batter with a flyout to left field and Wireman finished the inning giving up two hits, one walk and one earned run. It was not exactly the way she was expected to begin the game.

After that inning however, Wireman settled in and dominated the Southeast Missouri lineup for the rest of the game.

If it wouldn’t have been for an error by second baseman Mady Poulter on the first batter of the second inning, Wireman would have successfully retired the first seven batters she saw after the first inning.

A runner did not reach base on their own accord off of Wireman again until the fourth inning, when first baseman Ashley Ellis singled.

Wireman struck out two batters a piece in each of the second, third and fourth innings and struck out three batters in the sixth inning after allowing the first batter of that inning to reach on her second walk surrendered in the game.

What was so impressive about Wireman’s start against Southeast Missouri, despite the fact that it was a complete game with 12 strikeouts, was that every time she did allow a baserunner after the first inning, she followed it up by striking out the next batter she saw.

The win was number 13 for Wireman on the season and it was her 11th complete game of the season.

Her strikeout total on the season climbed to 138, third in the OVC.