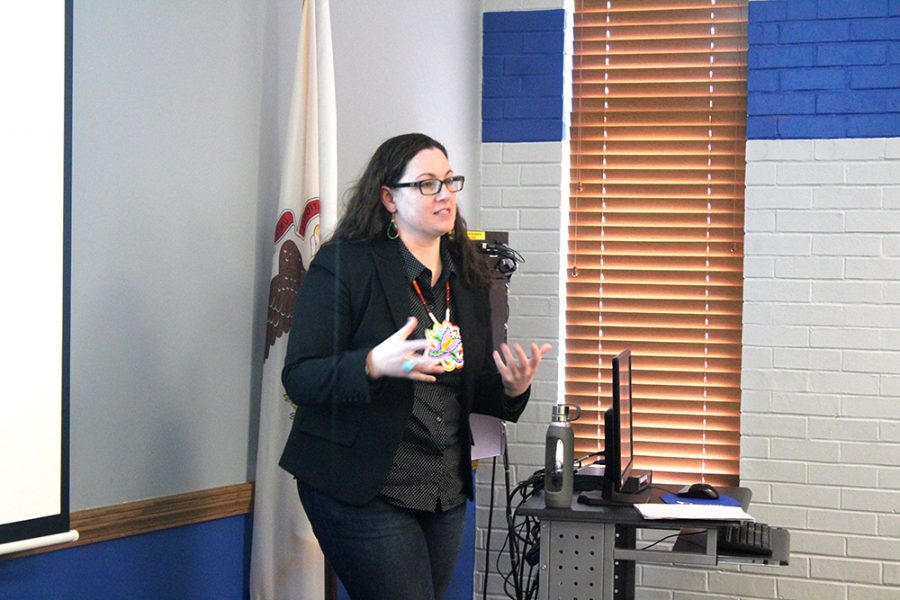 Olivia Swenson-Hultz | The Daily Eastern News Keynote Speaker Jenny Davis discusses the Two-Spirit Movement at the Seventh Annual Symposium of The Interdisciplinary Center for Global Diversity inside of the Arcola-Tuscola Room of the Martin Luther King Jr. University Union on Tuesday afternoon.

Research findings on the Two-Spirit Movement and The March First Movement, which fought against the marginalization of gender, were featured during the Seventh Annual Symposium of the Interdisciplinary Center for Global Diversity Tuesday afternoon.

History professor Jinhee Lee and Jenny Davis, an assistant professor of anthropology at The University of Illinois, Urbana-Champaign, presented their findings in the Arcola-Tuscola Room of the Martin Luther King Jr. University Union.

Lee discussed her research on how the “March First Movement” resulted in victims of thought crime.

She presented the same research at the Association for Asian Studies Conference last month in Washington D.C.

The March First Movement was when peaceful protesters took to the streets and called for independence during a colonial period of harsh military rule of Korea by Japan, Lee said.

Lee said she decided to center her research around the March First Movement because it is one of the few largely recognized colonial movements that involved women.

“The March First Movement is well known in Korean history but all National Korean figures celebrated today are men,” Lee said. “Knowing that women endured as much as men under Japanese colonial rule but weren’t celebrated the same way got me interested.”

She said after reading accounts of women being imprisoned and tortured inside of English Missionary texts she decided to conduct her research.

Lee said women were subject to various forms of torture after being arrested, such as hanging from the ceiling and having to be naked in front of prosecutors.

“Recently, since the #MeToo Movement, people are looking at how women aren’t part of the history of Korea and are looking more at these stories and recognizing women’s roles in history,” Lee said.

Davis said she chose to research the “Two-Spirit Movement” because it is part of her heritage as a member of the Chickasaw Nation.

Two-Spirit refers to an identity designation where people identify as being both male and female, Davis said.

Davis said there were 500 different tribes, many of which did not choose to use binary gender systems, such as the Navajo Tribe that had five genders.

“The majority of indigenous communities have terms for multiple genders. Two-Spirit can appeal to all the different sexual acronyms,” Davis said.

She said the Two-Spirit Movement is building on the emergence of the largely white, gay movement.