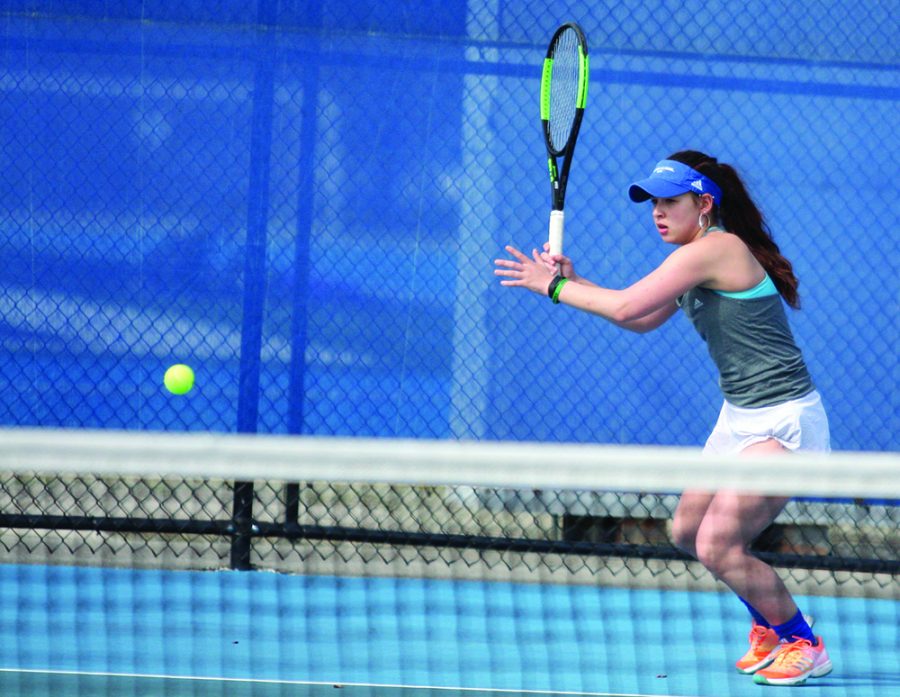 Eastern sophomore Emily Pugachevsky returns a ball in Eastern meet at the Darling Courts on March 30. The Panthers won the meet 5-2 against Belmont.

The Panthers (10-12, 4-3) started Ohio Valley Conference play with a 4-1 record, making themselves tied for third place before the weekend after two wins against Belmont and Tennessee State on March 30 and 31.

Eastern lost both of its matches this weekend by six or more points and only got one point between both matches.

Junior Srishti Slaria secured Eastern’s only point over the weekend by winning a close three-set singles match. At No. 3 singles Saturday, she won her first and third sets 7-5, losing the second set 6-2 to Austin Peay’s Helena Kuppig.

The only other upperclassman for Eastern, junior Abby Carpenter and senior Grace Summers, took their Austin Peay opponents to three sets in their singles matchups as well, but both lost the third set.

The other three competitors for Eastern in singles on Saturday, sophomores Stella Cliffe and Emily Pugachevsky, and freshman Karla Contreras, played tough sets against their opponents, only losing each set by an average of 2.83 points.

As of right now, Austin Peay is third in OVC standings.

Before the closer of the two matches Saturday, Eastern faced Murray State, who has been at the top of the conference throughout the year, on Friday.

Eastern started on a good note when Summers and Cliffe won their doubles match 6-3 to give the Panthers an early upper hand.

But the other duos for Eastern could not close out their matches to get the point for Eastern. Slaria and Claire Martin nearly won their doubles but fell 7-5.

Not much would then go right for Eastern in the singles portion of the match.

All six of the Eastern competitors lost their singles matches in straight sets. Pugachevsky was the closest to winning a set and playing in a three-set match.

She almost won her first set, losing 7-6, and she lost the second set only by two points, 6-4.

With the two straight losses, Eastern now stands in fourth in OVC standings. Winning both matches this weekend would be the best way for Eastern to stay in the top six teams, as the top six teams reach the conference tournament.