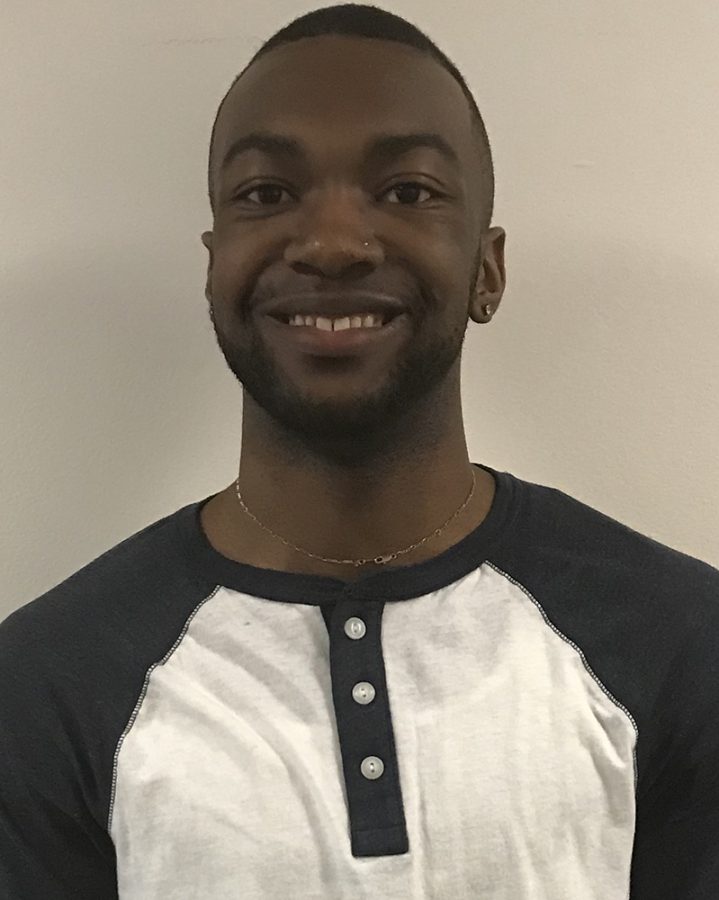 Edwyn Mitchell, a junior political science major, is the first person in U.S. history to win 1st place National Champion in persuasive speaking at the National Speech Championship Tournament for two years in a row.

Winning first place in the persuasive speech category of the National Speech Championship Tournament is something that Edwyn Mitchell, a junior political science major, is proud to have accomplished both this year and last year.

Mitchell, president of Eastern’s competitive public speaking team, competed in five different categories at the 2018 National Speech Championship Tournament on March 24 and 25 at the University of Nebraska-Lincoln.

Along with winning first place in the persuasive speech category, he also became the national quarter finalist in the informative speaking category and was awarded third place in poetry interpretation.

“Having won the championship last year, I truly was not sure how to make a comeback and win the same place again this year,” Mitchell said. “I knew I wanted to win again though, so it took a lot of hard work and determination and I pushed myself hard to win again. It was really just an amazing feeling to hear them announce me as the winner this year.”

Mitchell did not get involved in speech until his sophomore year at Homewood-Flossmor High School.

“During my freshman year, I was walking down the hallway one day with a friend and we were having a debate about something,” Mitchell said. “The coach of the speech team overheard us and said we should join the speech team. I thought about it, but I had just come to that school and I was not ready to join any clubs or anything.”

Mitchell said when he became a sophomore the speech coach approached him again, and he decided it was time to get involved.

“My parents have always encouraged their children to get involved with different activities instead of sitting around and doing nothing,” Mitchell said. “I was already involved with mixed martial arts, but I have always considered myself sort of a nerd and I had a lot of opinions about different social issues, so I decided speech would be a good platform for me to voice those issues.”

Mitchell competed in the oratory/persuasive speaking category of the regional tournament during his senior year of high school, and made it to the state tournament, coming in sixth place.

He said getting to state pushed him to do better, and he decided to attend a university with a competitive speech team.

“When I got to Eastern, I realized that the speech team here was a lot smaller than the one at my high school,” Mitchell said. “It helps because I can actually have a better opportunity to voice my opinions.”

For his persuasive speech at the National Speech Championship Tournament this year, Mitchell decided to write about police misconduct.

“Whenever a police officer engages in some sort of misconduct, what happens is the victim or the victim’s family gets a minor compensation from the city,” Mitchell said. “It makes sense to me, but I think instead of the money coming from taxpayers, we need our police officers to have liability insurance that comes from the insurance department, which covers compensation to victims, and our cops need training on how to de-escalate during situations and learn how to use speaking techniques to reduce hostile situations.”

Mitchell took these ideas to Eastern President Glassman and the University Police Department.

“I hope they can implement these techniques into their programs,” Mitchell said. “If these ideas go through, I would like to eventually submit them to the city and county police departments to see if they could be implemented.”

“I have always wanted to be in the position of an administrator or a director,” Mitchell said. “I think that will give me an avenue to speak about things that are important to me, and it gives me a chance to use my voice as a media and lead others the best way I can.”

Mitchell said he encourages students who are very passionate about social issues and justice, or have an opinion they need to address, to join the speech team.

“It is really good to have access to a platform and be able to voice your opinion,” Mitchell said. “I have learned that if you really set your mind to it and put forth full effort, you will absolutely achieve your goal.”