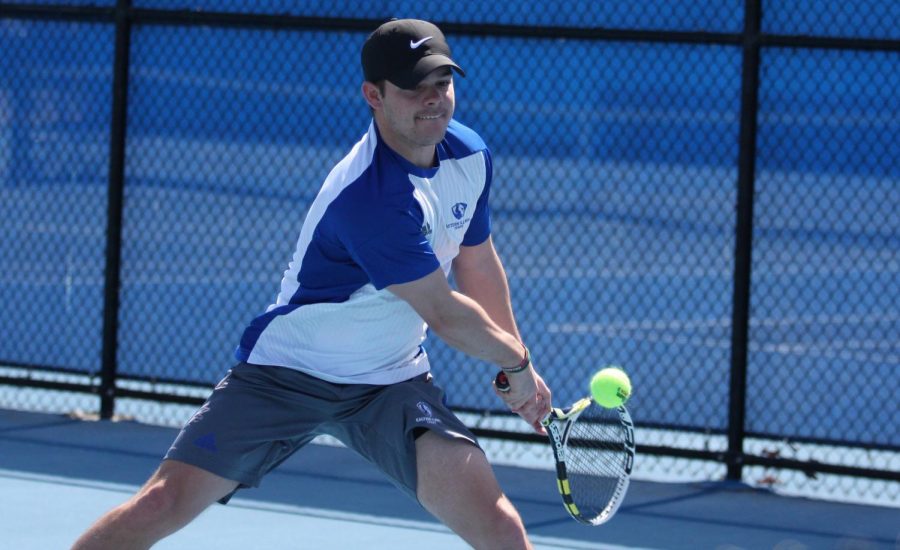 Eastern senior Grant Reiman returns a ball in the Panthers' meet last Friday at the Darling Courts. Reiman and his partner lost in the No. 3 doubles position.

With one more Ohio Valley Conference match remaining, the Eastern men’s tennis team is heading to  Austin Peay for its final road of the season Saturday.

The Panthers picked up their first conference win in over two years against Tennessee State last weekend, and with a struggling Governors team, this could not come at a better time for Eastern.

Currently, the Panthers are 5-15 this year, and they have tied their wins from a year ago. If Eastern can win its remaining two matches, Eastern will finish with seven wins for the first time since 2014.

For Austin Peay this season is one to forget, to say the least. The Governors have won just one match this season, and they have lost 11 straight matches.

Austin Peay’s only win this spring was against Southern Indiana 6-3.

The Governors have not won a conference match this season, standing at 0-3. Luckily for Eastern, the only win for Austin Peay has come on the road, and they’re 0-5 at home.

Almantas Ozelis leads the Governors in singles wins this spring, with four at the No 1. singles position.

Aleh Drobysh, Christian Edison and Jacob Lorino all have three wins a piece in singles competition. Edison and Drobysh both won their last matches in singles play, where Lorino has lost six consecutive matches.

Doubles play is more of the same for Austin Peay, with one team standing out from the rest of the pack.

Drobysh and Ozelis have found themselves five wins this spring at No. 1 doubles, and they have been on a roll, winning their last three matches.

For Eastern coach Sam Kercheval, he said it’s going to be a tough match against the Governors, but he is confident walking into the match.

“If the guys bring the mindset and execution we did last week, we can walk away with a win and even more confidence with what we are doing,” Kercheval said.

With a conference spot clinched for this year, Kercheval does not want to settle for anything.

“I just care to see a level of focus and intensity similar to last week,” he said. “Everyone knew that was a big match and were prepared. I don’t want to relax or settle for anything less this week.”

For Eastern this spring, sophomore Freddie O’Brien has led Eastern all season long in singles play, earning nine wins at the No. singles position.

Sophomores Gage Kingsmith and Braden Davis have four wins in different singles positions, and senior Grant Reiman has three wins of his own.

The doubles point will be huge for the Panthers to clinch, with Kingsmith and senior Jared Woodson racking up five wins this spring.

O’Brien and senior Trent Reiman will also be relied on, with the tandem also notching five wins this spring, while they’ve won their last two matches.

If Eastern wins its conference match, it will tie its wins from 2016 when the Panthers earned two wins in conference action.

The Panthers serve up with Austin Peay at 10 a.m. Saturday.